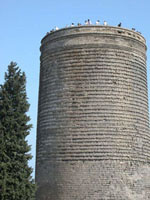 There is another medieval architecture monument in the southern part of Shirvan Dynasty palace complex. It is Seyid Yakhya Bakuvi Mausoleum also known as the "dervish" mausoleum.

This is the burial place of Seyid Yakhya Bakuvi who was a scientist of Khalilulla I's courtyard. He was born in the city of Shamakhi. He was a follower of Sufist doctrine, the author of many religious books. The scientist died in 1464 and was buried on the territory of the palace complex.

The stone mausoleum has the octahedral shape and is crowned with the octagonal hipped dome.There are three small windows with a stone lattice-shebeke on the mausoleum faces. The burial crypt is in the basement under the mausoleum. Its surface part was used for rituals and ceremonies. The mausoleum's interior was decorated with ornaments and colored stucco.
The mausoleum was attached to old Keikubad mosque (after Shirvanshah Kekubad - 14th century). In this mosque Yakhya Bakuvi worked, prayed, and taught. But in 1918 the mosque burned down during the fire and the only survived part of it is its foundation.