The Shirvanshahs ruled the area now known as Azerbaijan for almost 700 years, building and developing the region. For most of their reign, which started in 861, the shahs made their capital in Shamakhi, but from 1382 to 1500, they lived in Baku. During this time, the defensive fortress walls were built around the city, and the rulers built the Shirvanshah Palace, where they lived.

There were several parts to the palace, including a room to meet guests, a harem (where the women lived), several mausoleums, a mosque, and a bathhouse. Today, the main parts of the palace are used as a museum, displaying items that would have been used and worn in the Middle Ages in Azerbaijan. Much of the palace has been restored, since there was extensive damage done once the Shirvanshahs moved back to Shamakhi, and especially once war arrived in Baku in 1918. 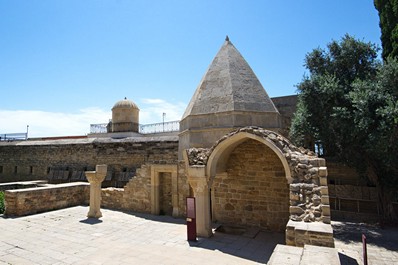 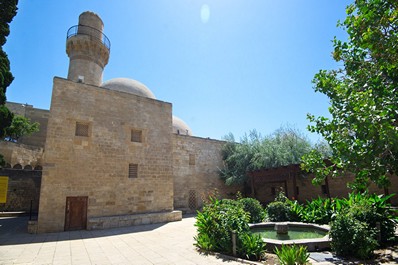 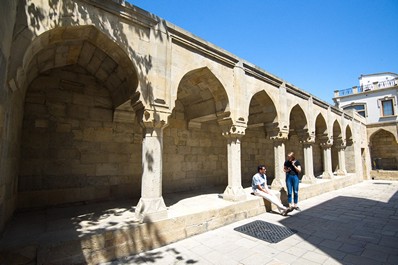 When you first enter Shirvanshah Palace, there is a welcoming courtyard, filled with plants and trees around a pond. On a wall opposite the entrance are bullet holes, left from fighting during the lawless days in 1918. The exhibition continues inside the palace, through the original waiting room and reception room, which have been mostly stripped of their original decoration. When the Russians came in 1920, they took the finest ceramics and masterpieces to Russian museums in St Petersburg and Moscow. Today, there are only replicas in the Shirvanshah Palace itself, plus various exhibitions on the history of the Shirvanshah Dynasty and famous historical figures, like the literary giant Nizami Ganjavi. A special room shows off the fine jewelry made for women and horses (because there’s nothing an Azerbaijani man loves more than his woman and his horse), and art exhibitions in some of the other spaces. 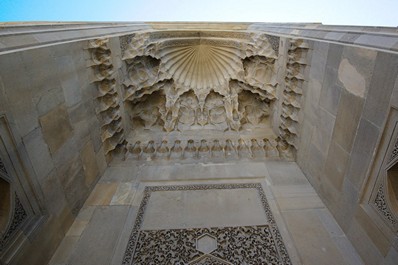 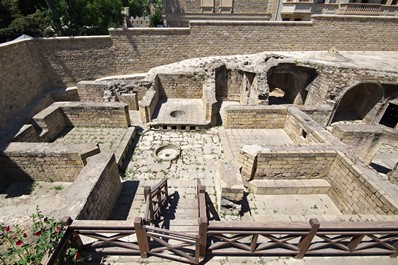 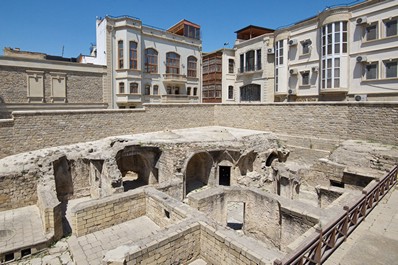 Moving outside of the main palace, there is the Divankhana, which was partly built when the Shirvanshahs fled Baku ahead of advancing Persian armies in 1500. The space could have been designed for discussing new laws or business, or it could have been a religious space or a mausoleum. No one really knows, though the beautiful symmetry and graceful arches make for a calm and serene spot. Many parts of the decoration and embellishment remain unfinished, though there are excellent engravings featuring local trees, like fig and nut trees. In 1920, Russian armies used the Divankhana as barracks (indeed, the whole palace housed soldiers), and those who stayed here left behind graffiti with their names. There are tunnels beneath the Divankhana, most of which were used for storing food, but at least one extends further, which would allow for a quick escape ahead of invading armies.

Further behind the Shirvanshah Palace are an exhibition space, several mausoleums, a mosque, and a bathhouse. The broad exhibition space houses remains of Bayil Castle, which used to defend Baku’s harbor until the sea levels changed and the castle sank under the water, to be forgotten for centuries. Some parts of the castle have been excavated, including long stretches of script in Arabic and Persian that used to decorate the top. These text decorations now line the back courtyard of the palace, near the Murod Gate. 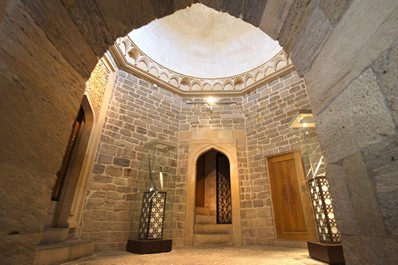 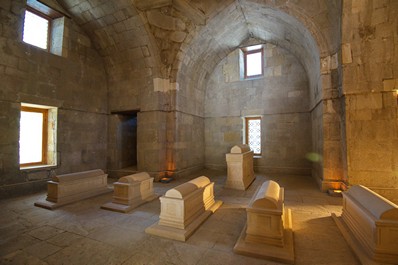 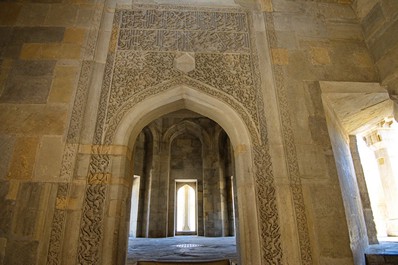 Down the hill are the entrances to the mosque and the family mausoleum. Between the two places is a pistachio tree, which despite being centuries old, still produces ripe fruit every August. The mosque was designed to be acoustically perfect, so that the imam’s voice could be clearly heard both in the men’s section and in the women’s section. There were special holes and chambers built into the walls to absorb sound waves, and a curved passage between the men’s section and the women’s section that allowed voices to pass through, but kept the two sexes from seeing each other while praying. The large spaces in the walls (including a partially hidden second storey) were also perfect for hiding gold when invading armies came through, since mosques are sacred and soldiers would leave them untouched.

The Shirvanshah family mausoleum was first built to hold the remains of Halilullah’s family. Halilullah ruled from 1417 to 1465, the second of three shahs to live in Shirvanshah Palace. His mother was the first to be buried in the mausoleum, as the inscription on the outside explains. The architect’s name is also inscribed on the front of the mausoleum, but with a twist. Since architect’s weren’t supposed to put their names on buildings, he had to get extra creative. His name is written in Arabic script in a teardrop design, but backwards, so it can only be read with a mirror. There are about seven graves inside the mausoleum, including Halillulah and his children in addition to his mother. 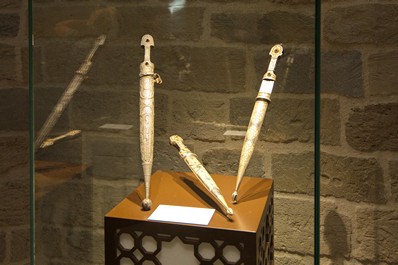 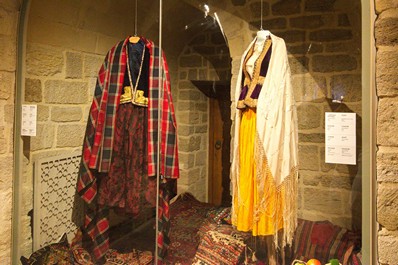 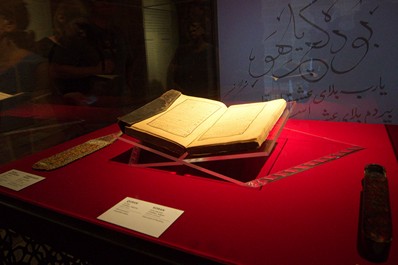 The very lowest part of Shirvanshah Palace is so far down the hill that for centuries, it was actually underground. The bathhouse was an important part of palace life, but after the shahs left, it fell into disrepair and eventually was buried underground and forgotten. Archaeological excavations later rediscovered the bathhouse chambers, complete with the copper pipes that brought the water and the large cisterns for heating it. The bathhouse was crucial for social life, with women gathering to arrange marriages and show off social status, and men gathering before their weddings and for socializing.