General information about China, its state system and official symbols 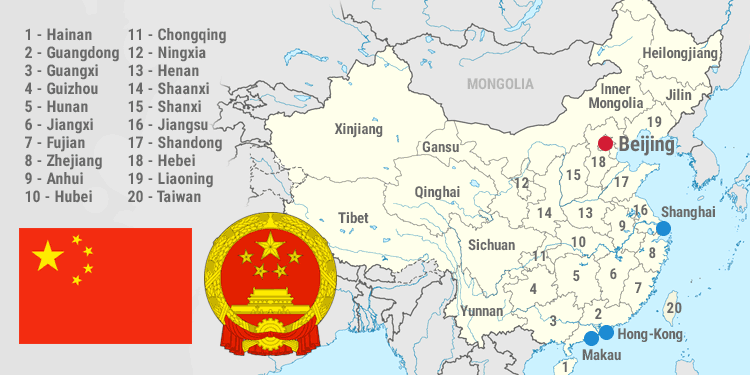 Enigmatic China… this is how this amazing country may be characterized. As far back as ancient time China was a mystery for the Europeans. Some of them considered it such an Eldorado, the other tried to reveal its scerets, however, for a long time, China was in isolation, which ended in the mid-XIX century.
Nowadays thousands of tourists visit China annually to see the sights of this country. Among these sights are Golden City, the Great Wall of China, numerous Buddhist temples, destroyed cities etc, China is famous for, including its nature.

The Chinese nature is charming with its landscapes. The country’s western part is occupied by the famous Tien Shan Mountains with the world’s highest tops conquered by professional mountain-climbers. Furthermore, there lies the Takla-Makan Desert, bordering on the Gobi Desert in the north. The local landscapes are also rather attractive for the tourists who are not afraid of going on a journey by forgotten routes of the Great Silk road. The south and east of the country are occupied by numerous resorts and recreation areas: many of them are located on seashores.

China is the city of contrasts where the Chinese neighbor with the Uygurs, Mongols, Manchurians. They profess Confucianism, Daoism, Buddhism, Islam and Christianity. There, the ancient customs and traditions co-exist in immediate vicinity with the world’s most modern engineering achievements. 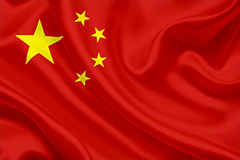 The present flag was adopted in China in 1949 since the foundation of the People Republic of China. The flag meaning is - red color symbolizes revolution, emphasizing that political power of the People Republic of China was achieved in hard and bloody struggle. In its upper left corner there are five stars, with the bigger one symbolizing the Communist Party of China and four smaller ones. The disposition of the stars on the flag shows great unity of different layers of Chinese community led by the Communist Party of China.

The PRC’s coat of arms was adopted on 20 September 1950. The national coat of arms features Tiananmen Square, lit by five yellow stars and surrounded by wheatears with a gear. The yellow and red colors of the coat of arms traditionally symbolize happiness and prosperity. Tiananmen symbolizes the spirit of Chinese peoples in struggle against feudalism and imperialism; the wheatears and gear – the peasants and working class.

The national anthem “March of the Volunteers” was written in 1935. The anthem text was written by playwright Tian Han, the music - by Nie Er, the founder of Chinese new music movement. On 27 September 1949, the CPPCC session made a provision to adopt this song as a temporary national anthem, and on 4 December 1982 the NPRC made decision to approve it as an official national anthem.