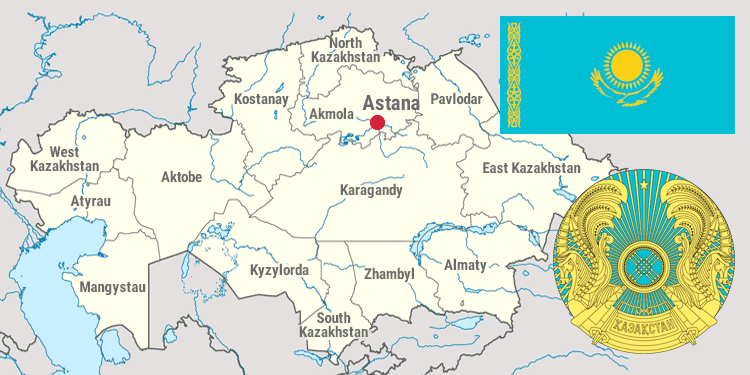 Kazakhstan is located in the heart of the Eurasian continent. Its territory occupies 2, 724, 900 square kilometers (1,049,150 square miles). It is the CIS’ second and world’s ninth largest country. The Kazakhstan territory is larger than the twelve countries of the European Union! Kazakhstan borders with China, Kyrgyzstan, Turkmenistan, Uzbekistan and Russia. The total length of the borderline is 12,187km.

Kazakhstan stretches for more than 3,000 km (covering two time zones) from the lower reaches of the Volga in the west to the foothills of the Altai Mountains in the east, and almost 2,000 km from the West Siberian Lowland in the north to the Kyzyl Kum desert in the south.

The remoteness of the country from the oceans and the vastness of its territory affect the climatic conditions of Kazakhstan. The climate is sharply continental with an average temperature between - 19…-4 degree in January and between +19…+26 degree in July. The temperature in winter can lower to - 45 degree while in summer rise up to +30 degree.

In terms of number of inhabitants Kazakhstan is divided as follows:

Language: The Kazakh language is adopted as the state one. Russian is also widely used.

Holidays in the Republic of Kazakhstan:

Religion: The Republic of Kazakhstan is a multinational state, inhabited by more than 120 nationalities. The main religion is Islam, but the Kazakhs manifest tolerance towards other religions of the peoples living in their territory, such as Christianity, Judaism, etc. The country has built many mosques and churches in recent years. Read more...

Geography: The Kazakh territory is fed by 8,500 rivers. The length of seven of them (the longest ones) exceeds 1000 km, including the Ural and Emba flowing into the Caspian Sea, the Syr Darya, flowing into the Aral Sea and the Irtysh, Ishim and Tobol, carrying their water to the Arctic Ocean. Kazakhstan has 48,000 lakes. The largest of them are Balkhash, Zaisan, Alakol, Tengiz and Seletengiz. Kazakhstan occupies the northern part and half of the eastern coast of the Caspian Sea. The Kazakh part of the Caspian Sea coastline is 2340 km. The major part of Kazakhstan is occupied by deserts and steppes. The rest of the area is covered by semi-deserts and forests. The flora and fauna consist of 155 species of mammals, 480 species of birds, 150 species of fishes and about 250 species of medicinal plants, with very rare ones among them.

Mineral resources: The huge territory of Kazakhstan is rich in minerals. The mining and processing plants for coal, oil, gas, ferrous and non-ferrous metals play an important role in the national economy. The main minerals are ores of nonferrous and ferrous metals, uranium. Kazakhstan has explored the world's largest reserves of chromium, vanadium, bismuth, fluorine, iron, zinc, tungsten, molybdenum, phosphorite, copper, potassium, cobalt, kaolin and cadmium. The country has about 160 oil and gas fields, including the largest one - Tengiz. Recoverable reserves of the Tengiz and Korolev fields are estimated from 750,000,000 to 1,100,000 tons of oil. Kazakhstan has 160,000 tons of coal resources at 155 attractions, including 10 deposits of coal, bitumen and lignite. The iron ore resources in Kazakhstan are among the world’s cleanest, free of impurities. Thanks to Zhanatas and Karatau deposits, Kazakhstan is the world’s second largest in reserves of phosphorite (after Russia). Kazakhstan is the world’s leading aluminum producer . The huge reserves of copper ore found in Dzhezkazgan are the second largest oilfield in the world. Kazakhstan has significant resources of salt and construction timber.