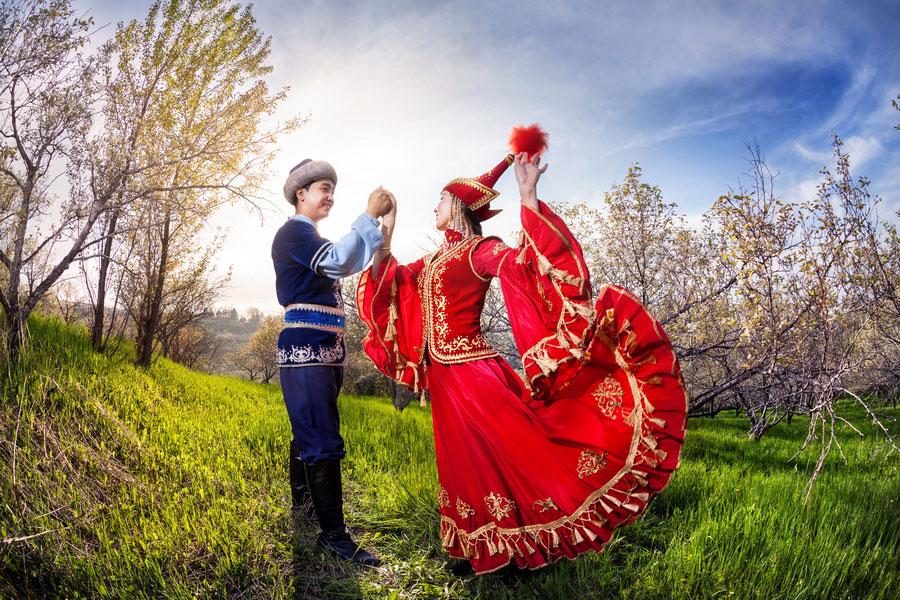 Public Holidays in Kazakhstan in 2023

Public Holidays in Kazakhstan in 2024

Kazakhstan, the ninth largest country in the world, embraces many nationalities who have contributed to the evolution of the nation’s public holidays. Below we have listed the major Kazakhstan holidays, each of which is likely to invoke in visitors the tourism slogan of Kazakhstan - “Very Nice!”

Kazakhstan began celebrating the New Year in accordance with European traditions while under Russian rule in the mid-19th century, and today it is one of the country’s most beloved holidays.

In Kazakhstan, the heroes of New Year are Ayaz Ata (Santa Claus) and his granddaughter Qar Qiz (Snow Girl). Together they deliver bags of gifts and plenty of cheer to homes and schoolrooms across the country. Long after children grow into adults, the magic created for them by parents and relatives over the New Year remains etched in their minds as they recreate a festive atmosphere for the next generation.

At midnight on December 31st, people welcome the New Year with exuberant words of congratulations accompanied by ample fireworks, heartfelt toasts and mouthwatering feasts shared with family and friends. Although traditionally a family holiday, some residents of Kazakhstan’s larger cities now prefer to spend New Year's Eve at special events held in many restaurants and bars. Read more...

Along with the entire Orthodox Christian world, Orthodox residents of Kazakhstan celebrate Christmas on January 7th. Church bells chime and festive liturgies are recited in Orthodox churches across the country. The main service is held in Assumption Cathedral in capital city Astana, the largest Orthodox church in Central Asia which can accommodate up to four thousand persons. After the service, it is customary for believers to visit relatives and friends, congratulating each other with gifts, sweets and special Christmas presents for children.

In 2005, Orthodox Christmas was declared an official holiday in Kazakhstan, and today the holiday is observed by many people in the country regardless of their religion or ethnicity.

International Women's Day, now celebrated in many countries throughout the world, has long been counted among the major national holidays in Kazakhstan. Its history dates back to 1908 when more than fifteen thousand women gathered in the streets of New York to fight for their equality and demand shorter working hours, better paying conditions and the dismissal of child labor. Two years later, at an international conference in Copenhagen, Clara Zetkin established an international day on which women could unite to draw attention to their plight through rallies, processions and demonstrations.

In Kazakhstan, March 8 became a non-working holiday in 1966. On the eve of the holiday, the head of state honours mothers with multiple children and other successful women with state awards. Men give flowers and gifts to the women in their lives in a show of respect and admiration, and events which celebrate women and their unique role in society are held at schools, businesses and public venues. Read more...

Nauryz (Navruz), the holiday of the spring equinox, is observed in Kazakhstan and many other eastern nations as a symbol of spring, new beginnings, prosperity and unity.

The history of the holiday has its roots in the pagan rituals of the pre-Islamic period. In former times, Nauryz was called the "Great Day of the Ulus (Nation)" and it was believed that the more elaborate the celebration, the more prosperous the coming year would be.

Nauryz remains one of the most important national holidays of Kazakhstan, where Kazakhs celebrate in their own unique way as they seek to preserve as many traditions passed down from their ancestors as possible. It is believed that on the eve of the holiday all debts should be paid, quarreling should cease and the whole house be put in order.

Each family prepares a special feast, or dastarkhan. The main dish is navruz-kozhe, a rich soup traditionally made from 7 ingredients - milk, meat, butter, millet, rice, raisins and corn. Although the precise ingredients may vary (one can add cottage cheese instead of rice, for example), the number of ingredients used in the dish must always be 7, the number of luck and prosperity considered essential for the Navruz celebration. In ancient times navruz-kozhe was poured into seven bowls to feed 7 persons. It was important to invite 7 guests to your home on this day and for each person to visit 7 houses in turn.

Kazakhstan People’s Unity Day was established in 1996, replacing the International Day of Workers that was celebrated during the Soviet era. Representatives of more than 150 nationalities have lived in Kazakhstan for many centuries, and on this day the people of Kazakhstan celebrate “Unity in Diversity”, one of the main principles espoused in the country. Various concerts, festivals and sports competitions are held in every city across the nation. Museums, theaters and libraries offer performances and exhibitions, demonstrating the equal respect shown toward each ethnic group in the country. Read more...

May 7, Defender of the Fatherland Day

On May 7, 1992, a decree was signed to create the National Armed Forces of the Republic of Kazakhstan, and in 2012 the day was declared a national holiday. On this day, the people of Kazakhstan pay tribute to their veterans, who are presented with awards and honorary military titles by the authorities. Open-air concerts are typically held at city squares, along with military parades and demonstrations of elaborate military exercises.

The Allied defeat of Nazi Germany is celebrated in Kazakhstan on May 9 in touching displays of respect and honor toward those who lost their lives in World War II. More than a million soldiers from Kazakhstan fought in the ranks of the Soviet army during the war, with more than a hundred thousand Kazakhstanis awarded for their courage and heroic acts.

Massive celebrations are organized in the country on this day, including military parades and the Immortal Regiment March comprised of a grand procession of the war heroes’ grateful descendants. "Garlands of Glory" are placed at the graves of the deceased and at the monument of Otan Korkaushylar (Defenders of the Fatherland) in capital city Astana. Festive concerts and gatherings are organized for the war veterans in a show of gratitude for their deeds. Read more...

The city of Almaty served as the first capital of Kazakhstan until July 6, 1994, when it was moved for strategic purposes to the central city of Akmola. In 1998, its name was changed to Astana, and in 2019 the city was renamed Nur-Sultan, in honor of the first president of Kazakhstan, Nursultan Nazarbayev, whose birthday is also July 6. On September 17, 2022, President Tokayev signed a decree renaming the capital city back to Astana. The decree entered into force from the day of its publication.

Capital City Day is celebrated on a grand scale, particularly in Astana itself, where fireworks, concerts, theatrical performances, children’s events and city exhibitions may be enjoyed by residents and visitors. Read more...

Eid al-Adha is the culmination of Hajj, the annual Islamic pilgrimage to Mecca, and is celebrated on the 10th day of the 12th month of the Islamic lunar calendar. One of the most important significant religious holidays in Kazakhstan, it celebrates the joy of life and wellbeing while encouraging everyone to reach out to their neighbors. A key element of the holiday is the sacrifice of a cow, ram or camel, whose meat is then distributed to those in need. Charitable funds for the poor are likewise organized in the mosques.

In Kazakhstan, Eid al-Adha traditionally begins with the morning prayer, known as ait-namaz. During the day, people visit friends and family members, exchange gifts and treats and participate in celebrations and charity events. Festivals are held throughout the country which unite not only Muslims but local people of other faiths.

Constitution Day in Kazakhstan recognizes the basic principles of the state, which were approved at a national referendum on August 30, 1995. According to the first article of the Constitution, Kazakhstan asserts itself as a democratic, secular and legal state whose highest values are the life and basic human rights of the individual.

The capital offers residents and guests an array of festive programs. Kazakh and foreign pop star concerts are held in open-air and enclosed venues. At a sports festival held on the city square, everyone can take part in tug-of-war, streetball, mini-football, the ancient nomadic game of asyk atu and other competitions. In city parks, entertainment programs for children are organized, and in the evening colorful fireworks illuminate the city. Read more...

Republic Day was included in the list of public holidays in 2001, but in 2009 it was removed from the calendar of official dates.

Speaking at the first meeting of the National Kurultai, President of Kazakhstan Kassym-Zhomart Tokayev proposed to restore the Republic Day as a national holiday.

Republic Day is celebrated on October 25. Concerts, scientific conferences, creative contests, sports competitions, patriotic, volunteer and charity events are held in honor of the Republic Day in the regions of Kazakhstan.

On December 16, 1991, a new era began in the history of Kazakhstan when the country declared its independence from the Soviet Union. Kazakhstanis celebrate this holiday, counted among the most important public holidays in Kazakhstan, with gusto. On the eve of the holiday, distinguished cultural and political figures are awarded with honors. Top state officials participate in concerts and festivals held throughout the republic, with the holiday ending in a huge display of fireworks.