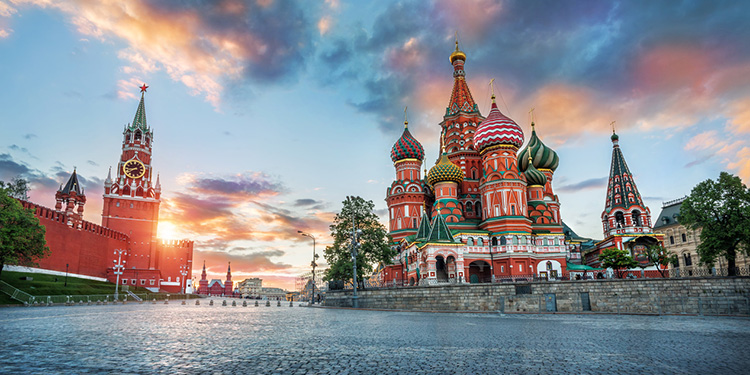 The Red Square is Moscow’s most important site. Many foreigners mistakenly think that the Red Square only gained prominence during the Communist regime. In fact, it is the most historic sight in Moscow - dating back to the 11th century. Throughout its 1000-year-old history, the Red Square has been at the epicentre of political, social and religious life in Russia. Much of the original red-brick buildings that were built in the medieval times have survived to the present day. Along with the architecture, the character of this eminent square remains unchanged. Today, the Red Square still hosts some of the country’s most important events like the world-famous New Year’s celebrations and the headline-catching parade on Victory Day.

Whether you plan to travel to Moscow specifically to see the Red Square or if it’s only going to make up a small part of your trip, the Kremlin and Red Square complex won’t disappoint.

Did you know? There are quite a few “Red Squares” in Russia, many of which aren’t even red! The name comes not from the colour, but rather from the word beautiful which is very similar to the Russian word for red.

Why Visit the Red Square?

The History of the Red Square

Since the Kremlin was built in the 14th-century, it’s always had an open, square-shaped space on its Eastern side. This area was purposefully kept clear by the order of Ivan the Great so it could be used as shooting range in war. Later, after the Times of Trouble had subsided and Moscow was secure from invading Poles, what had been a battlefield began to turn into a bustling hub of commerce. Soon the square had 700 traders’ stalls and, as early as 1561, St Basil’s Cathedral was erected.

As the Muscovy princedom which ruled from the Kremlin became ever more powerful, new palaces, churches and towers were added on the inside of the Kremlin and on the Red Square. A moat was dug between the Kremlin and the square, part of which was kept free of water so that lions, tigers and even elephants could be kept for the Tsar’s entertainment! 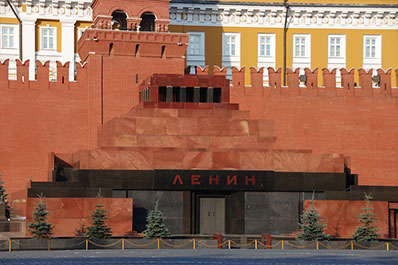 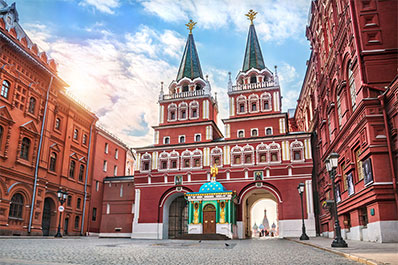 After Peter the Great declared St Petersburg the empire’s capital, the Red Square lost its status as the centre of the Russian state. While the Tsars still visited the Kremlin’s palace, the Red Square only became an eminent part of Russian society 300 years later when the communists moved the seat of power back to Moscow.

The Soviet Union saw the Red Square change for both the better and worse. The same sorry fate of religious symbols in the USSR befell the exquisite,16th-century Kazan Cathedral and the magnificent Resurrection Gates which guarded the entrance to the Red Square. The Soviets, however, didn’t just destruct. They erected monuments in honour of their comrades, the most famous of which is, of course, Lenin’s mausoleum.

Did you know? The walls of the Kremlin used to be painted white to protect the brickwork. They only stopped painting them in the 19th-century.

The Main Sights on the Red Square

The towers and thick, medieval walls of the Kremlin swallow up most of the view from the Red Square. So imposing is the Kremlin’s presence that it’s easy to miss the other treasures around the Red Square. Behind its red walls lie fascinating cultural treasures like the Russian Diamond Fund and the Annunciation Cathedral. It is also home to Putin’s official residence.

The eeriest site on the Red Square is easily missed due to its low, dark profile. Built under the shadow of the Kremlin’s walls, Lenin’s mausoleum is minuscule compared to the surrounding architecture. Its pyramidal structure is also far too small to accommodate even a fraction of the crowds who line up for hours outside. If you’re prepared to wait for the chance to slowly walk around Lenin’s waxen body for just two minutes, then make sure to arrive an hour before opening.

Did you know? Stalin was displayed alongside Lenin in the mausoleum till the 60s when Stalinism began to be scrutinised. Today, you can find Stalin along with many other notable comrades, such as Yuri Gagarin, buried behind the mausoleum where the moat and animal pit once lay.

Russia’s most emblematic symbol was built by the order of Ivan IV to celebrate his capture of Astrakhan and Kazan. The church's design that was meant to represent a bonfire has no comparison. No orthodox church, past or present, has ever been built that way.

The oval, stone platform near St Basil’s is often overlooked. But, when Tsars still lived in the Kremlin, this was the site which all visitors to the Red Square gathered around. On this historic platform, speeches were given to citizens, heads were lost in executions and war spoils were shown off.

Though it looks centuries old, the building on the upper slope of the Red Square is a relatively new addition; having been built in the 19th-century. Unlike all the other buildings, it wasn’t built by a tsar. Instead, passionate Slavic historians grouped up to gather enough funds to create the “greatest museum in Russia”. Its collections are impressive: with 9th-century relics and the Romanov’s personal belongings.

Built in the 1890s to serve as a shopping centre for Moscow’s elite, it only filled its purpose for a few short years before the Bolsheviks took over. During the USSR, it served many roles. In the beginning, boutiques were turned into communal flats, which were later turned into offices which finally were remade into soviet shops. During its history, it housed the body of Stalin’s second wife after she committed suicide as well as a secret, luxury boutique called “section 22” which sold outfits like Chanel suits to those well-connected with the ruling party.

Did you know? The Kremlin is the largest fortress in Europe still in use.

Celebrations on the Red Square

In days gone by, plump patriarch’s riding on donkeys used to the main event on the Red Square’s calendar but now things are a lot more sophisticated. While the line-up of smaller, seasonal events - such as formula 1 races and fashion shows - is constantly updating, the main events such as New Year’s Eve and the Victory Day Parade take place each year without fail.

May the 9th, the day the Great Patriotic War ended, was the USSR’s most important holiday. Though today New Year’s has regained its place as Russia’s most popular holiday, Victory Day is still celebrated by practically everyone. The most spectacular parades have taken place on the Red Square since 1945 and with each passing year, the parades only get bigger and better! Along with the show of military might, citizens gather in the thousands to form The Immortal Procession; carrying pictures of dead relatives on sticks as a sombre reminder of the toll the war took.

Though this celebration might not be well- known to foreigners, it is an international event. Since beginning in 2007, the band of the Russian army has invited twelve other country’s bands to perform with it each August on the Red Square. Music and military lovers alike come from all over Russia and beyond especially to watch this huge performance.

Russian New Year celebrations are legendary and the Red Square’s annual bash-up is the greatest legend of them all. In the run-up to the 31st, the whole of the Red Square is transformed into a winter wonderland with a giant ice rink, ice slides and a village-sized Christmas market. On the night, thousands pack into the square to drink, eat, dance and sing the night away. Russia’s best-loved performers grace the huge stages on the Red Square and, after Mr Putin’s New Year’s speech, the jaw-dropping fireworks are released.

Did you know? In 1987 a German pilot landed his plane right in the Red Square. Mathias Rust was just 18 years old and a bit of a daredevil. Amazingly, he flew from Helsinki to Moscow without the Soviet authorities spotting him.

The Red Square is one of the easiest sights to see in Moscow. There are no tickets and no queues. There aren’t even security checks. However, getting into one of the many sites within the square, especially Lenin’s mausoleum, can be a challenge and requires planning.

For attractions such as the Kremlin and the State Historical Museum, tickets must be bought in advance during the summer high-season to avoid dreadful queues. Lenin’s mausoleum has the longest queue but, because entrance is free, the only way to circumvent the queue is to arrive one hour early. It is also vital to google which days the mausoleum will be open during your trip as it only opens a few days a week for three hours at a time. If visiting the Kremlin, it is unbelievably helpful to download the free Kremlin app before visiting. The Kremlin is filled with so many different buildings spread out over such a large area that without the app it’s incredibly easy to get lost.