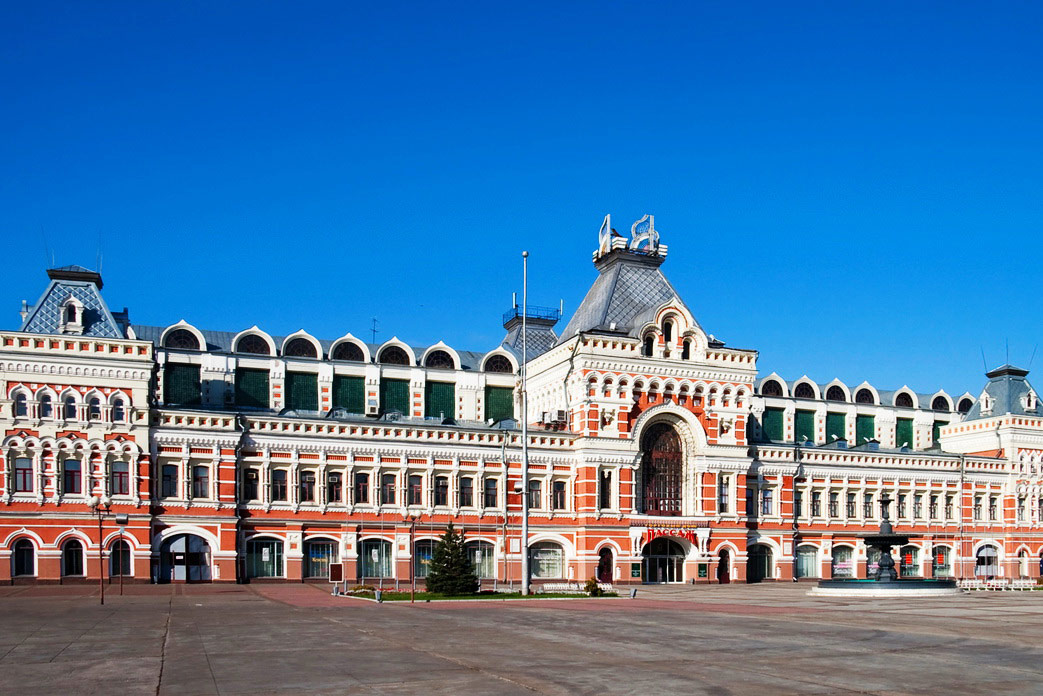 Nizhny Novgorod Fair is a historical district in the Zarechnaya neighborhood of the city which once brought fame and prosperity to the region as the setting for the largest fair in the Russian Empire. Today this famous site, known locally as Nizhegorodskaya Yarmarka, is the site of an exhibition hall and conference center.

A key trading ground and cultural center in the Volga Region, Nizhny Novgorod Fair contributed to the success of Russian merchants and craftsmen and to the rapid development of local hotel and restaurant industries. The grounds were constructed with the aim of developing the city into the third capital of Russia. In fact, the saying “Petersburg is the head, Moscow is the heart, and Nizhny Novgorod is the pocket of Russia” was coined in the 19th century to coincide with the transfer of the fairgrounds to Nizhny Novgorod from their original locale 100 kilometers down the Volga.

Initially the fair was known as Makariev Fair, for it was located near Makarevsky Monastery. Held annually on August 7th, the feast day of St. Macarius, the trading frenzy lasted only for the day. In 1627, Tsar Mikhail Fedorovich ordered the monastery be allowed to collect dues from the fair, and in 1641 he gave permission for the fair to be held for the entire month of July.

The locale for the trading grounds was not chosen at random, for during the Middle Ages the Volga River served as the country’s main transport artery. Along this trade route which connected Russia with the East through the city of Astrakhan, goods were delivered from Central Asia and Persia, wine arrived from Europe, and Tatar and Russian breeders would import horses. Armenian merchants made a significant contribution to the development of this trade route as they shipped in rare carpets, silks, spices and precious stones from the East.

The fairgrounds were simply bursting with activity and life, which Pushkin perfectly captures in his satirical yet accurate description of the fair in his novel “Eugene Onegin”. Nobles who came to buy a year’s worth of supplies would even purchase fashionable outfits as an excuse to bring along their daughters who were eligible for marriage. Complete with all of its merits and quirks so colorfully highlighted by the great poet, the bazaar would doubtless have continued to expand. Yet on August 18th, 1816, the grounds were destroyed in a massive fire, and a year later the decision was made to move the fair to Nizhny Novgorod in order to boost the city’s status.

The research and undertaking of this massive move was entrusted to Augustine Betancourt, a Spanish engineer who headed the Petersburg Committee for Structures and Hydraulic Works and who oversaw construction across the Russian Empire. It was Betancourt who decided to build the new fair at the confluence of the Oka and Volga Rivers, since most of the goods were delivered along this route. The fair was built on an artificial embankment 3.5 meters high, and a 100-meter-wide bypass channel was dug around it to avert another potential fire.

The new fair was first called Betankurovsky in honor of its designer. More than 40 stone buildings built along the canal banks were used for trade and the storage of goods. An indoor market (Gostiny Dvor) erected in the center of the fair consisted of 60 separate buildings with 2,530 shops, while a 510-meter-long pontoon bridge built across the Oka River was the longest of its type at that time.

Around this time, Alexander Nevsky Cathedral was erected by architect Auguste Morferan, the designer of St. Isaac's Cathedral in St. Petersburg. The square behind the Nizhny Novgorod cathedral was dominated by a 54-meter-high bell tower, while Kazan Church with its four-tiered tower and 15-meter-high spire, an Armenian church and a mosque were also built on the grounds. The defining feature of the far side of the square was four Chinese pagodas which served as the hub of the tea trade for many years. The fair’s advanced sanitary facilities included an underground vaulted sewage system, the likes of which did not begin to appear in cities such as Paris until much later.

The opening of the Nikolaev-Nizhny Novgorod railway line in 1851 ushered in the heyday of Nizhny Novgorod Fair in the latter half of the 19th century. As the fair gained international recognition, up to 200,000 people would visit annually. In 1881, Nevsky Cathedral was consecrated in a solemn ceremony attended by Alexander III, his wife Maria Fedorovna and Tsar Nikolai. In the 1860s, 650 lanterns were installed by a wealthy merchant on the territory, and 25 years later electric lighting first appeared. In 1870, a water supply system, fountains and a water tower were built on site. In the late 1880s the central fair house was rebuilt to mirror the style of 17th-century Russian architecture and branches of prominent Russian banks were opened nearby. In 1896, an exhibition was opened next to the fair in conjunction with the establishment of a tram service.

The collapse of the tea monopoly prompted an increase in demand for peasant goods and cotton products which were delivered from the Moscow, Vladimir and Kostroma Regions. Iron was shipped in from the Urals, and fish, bread and wine grew to occupy a significant sector of the food trade. An entire street was allocated for the entertainment of guests, and plans were even envisaged for a new theater.

Unfortunately, the success of Nizhny Novgorod Fair was ground to a halt with the outbreak of World War I and the rise to power of the Soviets. During the NEP (New Economic Policy), the fair enjoyed a short-lived revival, even acquiring international status in 1928. Yet shortly thereafter, the trade center was officially closed on February 6, 1930 as part of the government’s fight against the NEP.

For decades, fairground buildings were used for housing and with the exception of two cathedrals, all of its religious buildings were destroyed. Over time, the area turned into an urban slum, and with the decision in 1970 to move the city center to the left riverbank, many of the city’s historic 19th-century structures were abandoned or destroyed. A store called Detsky Mir (Children’s World) was opened in the main fair house, and only after the collapse of the Soviet Union was a modern exhibition complex and conference center opened on site of the old Nizhny Novgorod Fair.

Although lacking its historic grandeur, the famous fairgrounds are still worth a visit if you are in Nizhny Novgorod and wish to glimpse the traces of the most prosperous trade center of the Russian Empire.