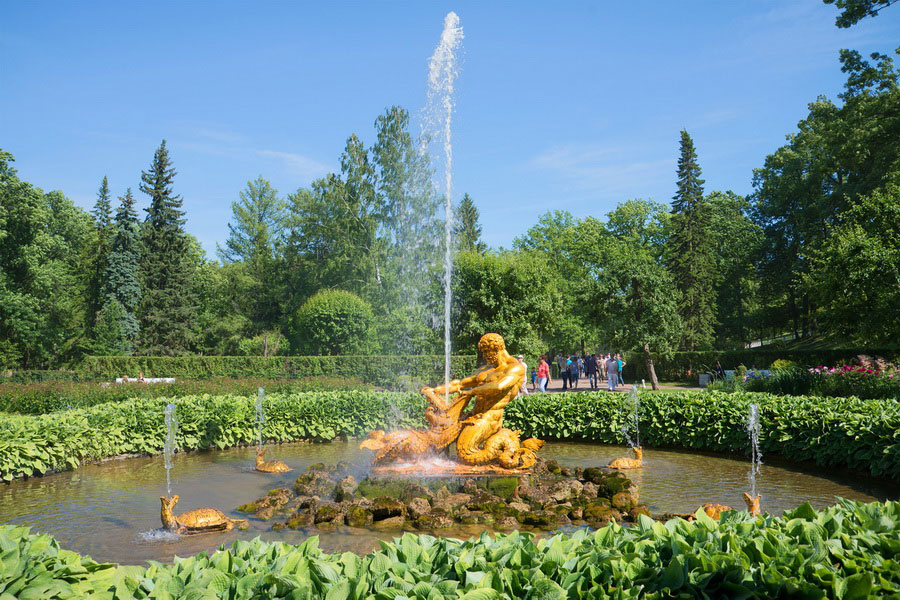 Numerous fountains, simple and complex, small and grand, funny and magnificent, are the main attraction of Peterhof.

Near Marly alley you will see two fountains similar in design. In the octagonal granite basins among sixteen powerful fan-shaped jets are the marble statues of Adam and Eve created in 1718. The biblical ancestors of the mankind glorify Peter I and Catherine I as the “ancestors of the Russian empire”. The fountains Adam and Eve are the unique monuments to the initial construction phase of Peterhof.

This fountain is the decoration of the Pyramid Garden. This is not only one of the most beautiful but also one of the most original of the fountains. In the square pool surrounded by elegant balustrade of vases gushes the foamy 8-m mass of water in the shape of geometrically correct seven-step pyramids formed by 505 jets of various heights.

In the middle of the round pool stands the sculptural group called Triton Tearing the Jaws of Sea Monster. Four tortoises are fleeing from the battle. The jets of water flow from the crocodile’s jaws and tortoises’ mouths.

Roman fountains are located on the square in front of the Chess Mountain Cascade. Outwardly they are quite similar and have a two-tier pyramid shape. On the massive granite pedestal stands a round marble bowl and above it the same bowl and pedestal are replicated, only in smaller scale. Five water jets gush from the top vase and in a frothy mass flow down to the lower circle and then into the pool.

The designers of the fountains were inspired by the stone fountains in front of the Cathedral of St. Peter's in Rome.

This grandiose fountain is a true decoration of Peterhof. Its main detail is the monumental figure of the sea god, Neptune with the trident, the symbol of his power. Before the base stand two sculptures of nymphs holding raised oars, the personification of the river waters. On the southern side of Neptune pool you will find a small granite surrounded three-tiered cascade. On the upper terrace of the cascade there is a round granite pedestal topped by the bronze statue of Apollo. Five water jets forming a bell gush from the upper terrace and flowing around the pedestal stream down into the pool.

Near Monplaisir Palace you will see the SunFountain. The cylindrical pedestal is occupied by the rotating column of bronze finished with gilded round parallel disks having 187 holes in their ribs. The jets of water gush like the sunrays. Under this water sun sixteen dolphins spraying water, are warming themselves.

This fountain was designed by M. Zemtsov and erected in 1725. In the deep round pool four ducks are floating in a circle. They are pursued by the dog called Favorite. Water is streaming from the ducks’ beaks and the dog’s muzzle.

The funny Umbrella Fountain looks like a huge mushroom. There are benches around its leg. The cap is rimmed with bright rainbow-colored scallops. They hide 164 small tubes with holes directed down to the ground. When a visitor sits on the bench the fountain goes off. The tubes come alive with water and a person finds himself in a water cage. You can’t get away dry from it.

Oak Fountain complex includes the oak tree, five metal tulips and “deception” benches. The leaves on his numerous tubular branches are made of copper and painted green. When the fountain comes alive the water comes out of the branches and tulips.