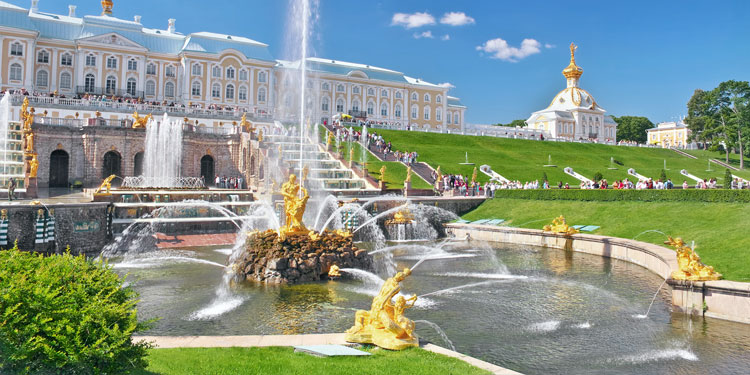 Peterhof is the most magical palace in Russia. Set in a lush estate on the southern coast of the Finnish Gulf, it was the Royal family’s favourite summer retreat. Generations of Tsars poured fortunes into fashioning Peterhof into a fantasy-land. The original Grand Palace which Peter the Great built was constantly being expanded, till it reached over 300 meters long and included two towering cathedrals on either end of its façade. Considering that the length of Versailles stretches to 400m, one might think that Peter the Great failed to achieve his dream of creating an estate grander than King Louis’s. But it is the gardens and fountains of Peterhof and not its palace that has earned it the title of the world’s most splendid Royal Residence.

Did you know? The Grand Cascade fountain in Peterhof is one of the largest monuments from the XVIII century.

The Fountains of Peterhof

Cascading from the foot of the Grand Palace all the way to the waters of the Baltic sea, the Grand Cascade is one of the 18th century’s most impressive scientific and architectural wonders. Sixty miniature fountains and over 250 golden statues make up the two perfectly symmetrical, tiered fountains which join to form one large marine canal. The gushing of grand waterfalls, splashing of roman fountains, trickle of streams and rippling of ponds filled with swans, saturate the air of this seaside palace with a magical mist that is beyond compare. Though the Grand Cascade is the crowning glory of Peterhof, it is by no means the only fountain. Throughout the grounds, there are 176 fountains in total - far more, Peter the Great would boast, than the 55 in Versailles. Read more about Peterhof’s fountains.

Did you know? All Peterhof’s fountains were designed to run without any pumps. The giant ponds in the Upper Gardens, which were once fish ponds, are high enough to build adequate water pressure to feed even the 21m high, Samson and the Lion spouting fountain!

The Secrets of Peterhof

For all his achievements, the mastermind behind Peterhof was a rascal. Peter the Great delighted in breaking conventions and shocking the Russian nobility. The Summer Palace and Gardens, therefore, were filled with practical jokes ready to be unleashed on tight-lipped aristocrats. By definition, boobytraps are hard to find. Even though visitors to Peterhof now have maps, many aren’t even aware of the secrets within Peterhof - that is unless they are unlucky enough to set a boobytrap off! Here are just a few of the surprises hidden within the grounds:

Designed in the 1720s by Peter himself, this was the largest of his boobytraps. Perforated pipes were laid down the entire length of one of Peterhof’s tranquil alleyways. At the flick of a hidden switch, Peter could soak up to one hundred people under a downpour! Later tsars, however, seemed to be either far less fun-loving or just not brave enough to soak hundreds of aristocrats at a time because they closed off the pipes as soon as Peter died. Thankfully, the Soviets saw the fun that could be had in wetting tourists and they reopened the Water-Road.

Few tourists ever find out about the Grotto. It’s hidden right under the main attraction - the Grand Cascade - and, apart from being one of the few parts of Peterhof that survived the Nazi occupation intact, it also has a few of Peter’s most ingenious tricks tucked within its cavernous walls. Take the forbidden fruits, though not literally; for if you do succumb to the temptation of reaching out for a plump nectarine from the fruit bowl on the Grotto’s central table, then you shall be punished with an almighty spurt of water! Should you be spooked by the deities with their gaping mouths or the dark corridors, don’t make the mistake of running out in haste. One wrong step and you risk setting off the Curtain of Water!

In the quiet of the woodlands lining the Finnish gulf, Peter built himself a homely cottage called Mon Plasir. It’s a charming place, still furnished with Peter’s personal belongings and with a picture-perfect view onto the bay. After walking through hectares of the estate, many a tourist has taken refuge in its walled gardens and rejoiced at seeing a pretty white bench in the shade. Indeed, if you were there in Peter the Great’s day he may well have invited you to join him while sitting on one such bench. Never trust a Romanov! The cobbled stones in front of the benches are a veritable minefield; with every second one positioned above a valve that unleashes torrents of water.

Most umbrellas protect from rain but, in the wonderland that is Peterhof, even the most ordinary things become extraordinary. Built in 1794, a time when Oriental gardens were all the rage, this giant, green umbrella with a bench encircling its base took its stylistic inspiration from Tsarskoye Selo’s Chineese Buildings. Therein ended its connection with China. Serene tea gardens were much too dull for the Tsar so, instead, he rigged the gazebo with a sprinkler system that would trap anyone who sat under it in a circle of water.

When the Nazis seized Peterhof they cut down the estate’s ten thousand trees. The greatest loss though wasn’t the ancient oaks or perfectly clipped lime trees, but rather the 6m high fir trees made entirely of lead tubes. From a distance, their 2,500 painstakingly painted leaves seemed to flutter in the breeze like the surrounding trees but, on closer inspection, visitor’s were shocked to see that the trees and tulips at their base were artificial. Fascinated aristocrats would try to take a closer look at these imitations of nature only to be greeted with hundreds of water spurts from the cracks in trunks of the trees.

Did you know? The Grotto is also home to Peterhof’s original wooden pipework that fed the Grand Cascade and a mini-exhibition on the history of hydraulics.

After the barbaric sacking of Peterhof by the Nazis, the communists surprised everyone by full- heartedly committing to restore Peterhof, down to the very last gilded candelabra. Since the 1990s, Peterhof has been a UNESCO-heritage site and it has since been declared one of Russia’s seven wonders.

Peterhof was built to be experienced in summer. Though its palace looks exceptionally large from the outside, inside there are only 30 rooms worth seeing. And, while the hall with 368 paintings is quite a sight, it is the fountains that make Peterhof what it is. To see Peterhof’s fountains, you must come between late April and September. The height of summer is, of course, the best time to visit a summer palace, but May and September are also popular months to visit.

On May 16th the official opening of the fountains is celebrated much as it would have been in Peter’s time with orchestras and dances. The grand closing ceremony in late September, however, is much more modern with light-shows, fireworks and loud music. For St Petersburg, these events are the highlight of the year so it’s best to book tickets well in advance.

If visiting on a normal day, make sure to arrive early and book tickets online to avoid standing in queues for upwards of 20 minutes. After exploring the Upper Gardens, which are rather small and only contain a few fountains, enter the Lower Gardens and follow the crowds to the Grand Cascade which comes to life at 11 each morning. Later, make your way to Peter’s great boobytrap, the Water-Road, which thrills hot and weary travellers with bursts of water at 1 pm, 2 pm and 3 pm sharp.

While marvelling at all the fountains and gawping at the magnificent vistas, keep an eye out for the estate’s cute residents. These tiny red squirrels and chirping blue-tits are so tame that all a passerby needs to do is place a few seeds on an open palm for a whole menagerie of sweet animals to come running and flying to them. Seeds and nuts are sold throughout the park, but the price is as royal as the surroundings so it’s best to buy a pack of sunflower seeds in a shop before the trip.

Did you know? Straight after the Bolshevik revolution, Peterhof was turned into communal flats! Thankfully, the soviets soon saw the blunder they made and soon turned it into a museum.