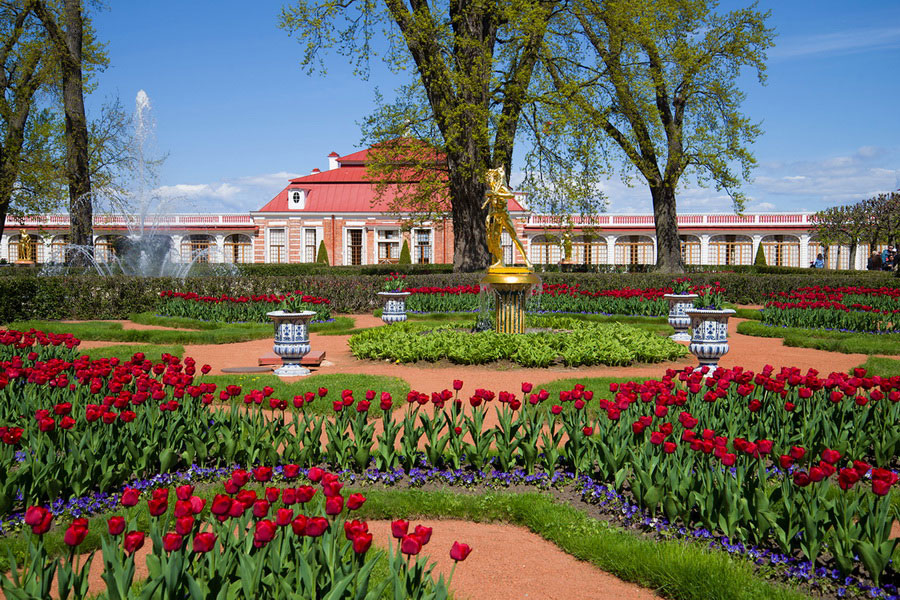 The Grand Palace was initially built in 1714 – 1721. Then it was named the Upper House and looked rather modest. The current building of the Grand Palace created by Bartolomeo Rastrelli in 1747-1754 boasts its grandiose beauty and a brilliant solemnity inherent in baroque style.

The Grand Palace is the center of the entire architectural composition of Peterhof. The elegant three-storey building with galleries is standing on the edge of the natural 16-meter the terrace and stands 300 meters tall! The central part of the palace is 17 m. It is adorned with the relief shield bearing the monogram of Peter I under the imperial crown. The roof is crowned by a gilded vase. Symmetrically placed on both sides of the central building are the Church and Coat of Arms buildings with gilded domes. The dome of the latter ends with rotating weathervane in the form of a three-headed eagle with open wings, the orb and the scepter in its claws. The central dome of the Church building is crowned with the orthodox cross, placed 27 m above the ground. Both buildings are linked to the central part of the palace by way of one-level galleries. The halls of the Grand Palace are of extraordinary beauty. Talented Russian sculptors, painters, artists, carvers and parquet makers performed decorative works there. The magnificent suite of rooms was richly decorated with gilded wood, mirrors, beautiful plafonds, parquet, and carved furniture. The interior of the Grand Palace brings visitors back to the magnificent Peter's time; it keeps personal belongings and furniture of royal persons, the owners of Peterhof.

Among the most interesting front rooms of the palace are:

- Chesme Room whose name comes from the Chesme Bay where Russian troops won their brilliant victory in the Russian-Turkish War. The paintings dedicated to the battle are kept in that room.

- Chinese cabinets shimmering and sparkling with gold like lacquered Chinese pictures. The cabinets in elegant Oriental style are decorated with Chinese lanterns and painted dragons as well as other fantasy creatures.

- Throne Room, the largest hall of the palace. Its area is of 342 square meters and the height is almost equal to the width. The most important element of the decor of this room is paintings – wonderful portraits of Peter I, Catherine I, Anna Ioannovna, Elizabeth, and the relatives of Peter I. By the eastern wall stands the ceremonial throne of the first quarter of the 18th century.

- Drawing Room - the central hall of the palace with one of the oldest interiors. In 1764 the hall was decorated with a magnificent collection of 368 portraits.

- Peter I’s Oak Room - preserved as a historical treasure and reconstructed with maximum authenticity. The furniture of the room includes the cabinet, office chairs and armchairs, typical for the first third of the 18th century. The mirrors, inkpot, candlestick, travel watch, English globe are the original items of 1720s.

Peterhof construction began with Monplaisir Palace. It was built in 1714-1723. Peter I, as the legend runs, identified the location of the future palace - on the shore of the Gulf of Finland – to watch the passing ships. The palace stands on the high granite-lined terrace. The palace itself is a very light structure. The central part is crowned with the pyramidal roof. It has two adjacent galleries - in the west and in the east – completed by small pavilions with lanterns. Those are the so-called guest galleries of the palace.

The central part hosts the Grand Room which three adjacent premises: from the west – the Secretarial, the Bedroom, Peter’s Marine Room; from the east - Chinese Room, Kitchen and Pantry. The Marine Room of Peter I is especially interesting. It has ancient navigational tools and the steel box with the monogram of Peter the Great. The walls are lined with oak panels depicting thirteen types of ships related to the beginning of the 18th century; all its windows overlook the sea. In front of the northern facade of Monplaisir there is the Marine Terrace. It opens a magnificent view over the gulf and Kronstadt. Monplaisir Palace was especially favored by Peter I, who used to name it «My pleasure». The complex also includes Catherine Palace, a small garden with fountains and flower gardens, Assembly room and the bath. Next to the bath there is a small Chinese garden with the artificial hill on top of which stands the sculptural group called «Cupid and Psyche».

Almost all the palaces of Peterhof bear French names. The name Marly, for instance, was borrowed by Peter I from the residence of French King, which he had visited while in Europe. Marly Palace was built in 1721-1723. It is the square with clearly expressed cubic form. It two-storey facade is covered with four-batter copper roof. The graceful balconies are decorated with gold-plated black-patterned forged bars. It seems like the miniature Palace is hanging over the water and is surrounded by ponds inhabited by trout and sturgeons. Each level has only eight rooms. Their interior is quite modest but the decoration of the rooms is complemented by magnificent paintings of Dutch and Flemish masters of the 17th – 18th centuries. Marly Palace is the monument to Peter the Great's era retaining the atmosphere of the imperial times. This palace kept Peter’s things - a small part of his wardrobe, which included a total of about three hundred items. In addition to Peter's wardrobe, Marley housed the palace furniture, Peter’s presents as well as various household items and paintings.

Located symmetrically to Monplaisir is the graceful building the Hermitage palace. The miniature two-story building looks very elegant. Forged openwork lattice windows and balconies adorn the northern and southern facades. The corners of the building are decorated with pilasters and rusticks, the facades – with arches and semi columns.

In Peter’s era such small but cozy palaces were very fashionable in Europe. They were intended for meetings with particularly close to the court people or solitary pastime of the monarchs. Peterhof’s Hermitage was the first such palace in Russia. It was built in 1721 - 1724. The Interior of the Hermitage was completed after the death of Peter I, although in full conformity to his own design. The walls were covered by oak panels; the partitions were lined with pictures. It was only in the mid-18th century the Hermitage was renovated by Rastrelli. The walls of the room were completely covered with paintings by French, Italian, Dutch and Flemish masters of the 17th – 18th centuries divided from one another by gilded stripes, which gave a special solemnity to the room. The following two centuries did not bring significant changes in the appearance of the Hermitage. It was still used for discussions of important public affairs and the rest of the nobility. Now the Hermitage houses a museum exhibition.