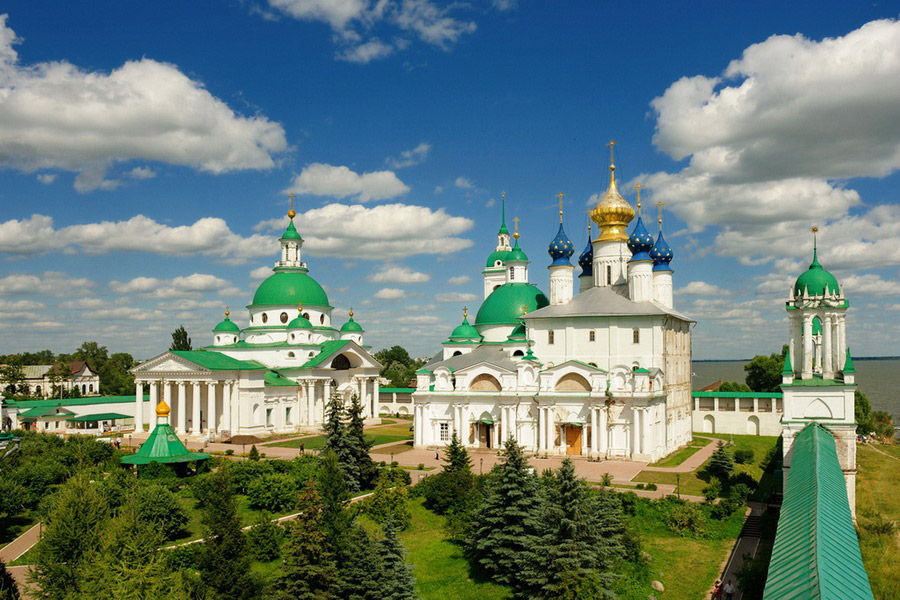 Located eighteen kilometers from Rostov due Uglich is Boris and Gleb Monastery. It was founded in the late 14th century by the monks from the Trinity-Sergius Monastery, Fyodor and Pavel, the companions of the Reverent Sergius. According to legend the place for the monastery was chosen by Sergius. The monastery was one of the richest in the Rostov. The monastery prospered during the reign of Ivan the Terrible, who made three visits to the monastery and made fifteen contributions. By the end of 17th century the Boris and Gleb architectural complex was completed.

This monastery is famous for its distinctive architecture. It was created from the 17th to 19th century. It stands on the picturesque shores of Lake Nero, and from afar its domes look like a part of a fantasy city. The monastery has Dmitrievskaya Church in classical style built on Count Sheremetiev’s money. Also interesting are the Conception Cathedral and Yakovlevskaya Cchurch. The monastery territory is well kept - flowers and flower beds are everywhere. There is the holy water spring in the yard. The panorama of Yakovlevsky monastery with it beautiful combination of different styles and architectural forms - the pseudo-gothic towers, Baroque and classical elements of the churches – attracts a lot of travelers.

In the eastern side of the city on the shores of Lake Nero stands the 11th – 12th century Abaraham Monastery. According to the legend, it was built on the site of the idol of Veles. Later it became the center of Christianity. Since times immemorial the monastery has kept the crosier given to Abraham by the disciple of Christ, John, with which he defeated Veles the idol. Ivan the Terrible, before the next attack on the Kazan Khanate, came to Rostov to take this crosier. In autumn 1552, after the long siege and bloodshed battles Kazan (the capital of the Khanate) fell. To commemorate that significant event, the Tsar commanded to build the Epiphany Cathedral (1553-1554) in the monastery. It was the royal gratitude for the wonderful crosier, which assisted the liberation of Russia from centuries of oppression.