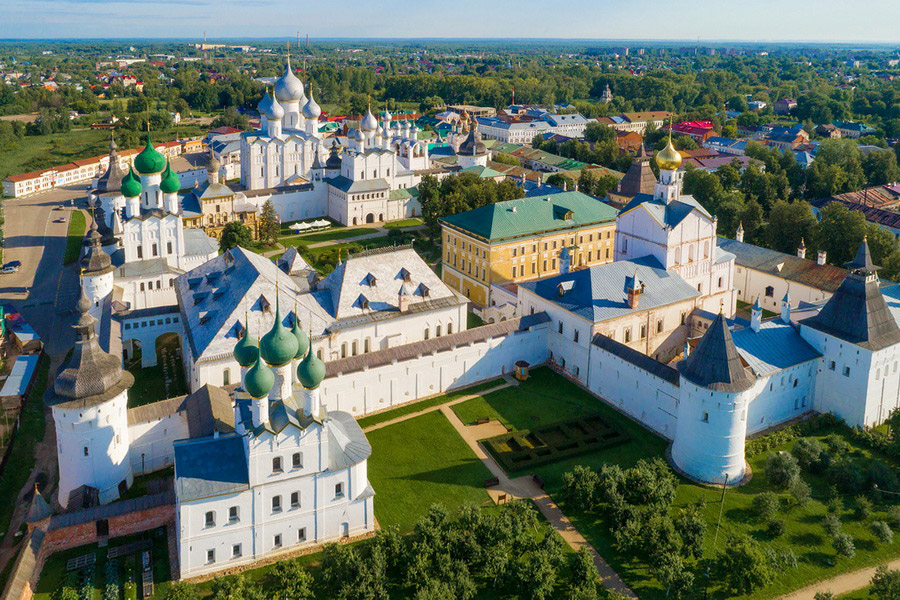 View of the city and the Rostov Kremlin

Tours, Attractions and Things To Do in Rostov

Perhaps the most exciting walk along the route of the Golden Ring awaits you in Rostov. This ancient city has preserved the unique atmosphere of medieval Russia thanks to its many monuments - ancient castles, churches, monasteries ... This unique heritage of the past testifies about the rich and long history of the city. Rostov is indeed one of the oldest Russian cities. It is mentioned in the chronicles from 862.

The background of Rostov tells that those lands were originally inhabited by pagan Finno-Ugric tribes, the Merya, who founded Sarskoye settlement there. Only in the 10th – 11th centuries the territory of Rostov became inhabited by Slavs who came from the north. In 988 Rostov lands were given to the great Russian ruler, Yaroslav the Wise. Then they were passed to his son Vsevolod and later, his grandson, Vladimir Monomakh and his descendants, Yuri Dolgoruky, Andrei Bogoliubsky etc. From the 10th to the 12th century Rostov along with Suzdal was the capital of the Rostov-Suzdal principality. Later, the center of principality moved to Vladimir.

In the beginning of the 13th century the independent principality of Rostov emerged. It was the time of the city’s unprecedented economic and cultural progress. The city grew with newly built churches, fortresses, palaces, and temples. Rostov became one of the largest cities in the northeast Russia. It was even called Rostov the Great, like Novgorod. No other city in Russia was granted such an honor. But the rapid prosperity of the city was interrupted by the Mongol invasion in 1238. However, the city quickly regained its grandeur. The infighting among the rulers of Rostov split it into separate parts. In the 13th century it was divided into Rostov, Yaroslavl and Uglich principalities. Using the weakness of the local rulers, Moscow princes took possession of Rostov lands. In the 15th century Rostov was fully annexed by Moscow.

In the times of Great Troubles Rostov was burned down and looted by the Polish-Lithuanian invaders. The end of the century in Rostov saw the beginning of the so-called Rostov Kremlin, the residence of Rostov metropolitans.

Besides, Rostov is famous for being the birthplace of St. Sergius of Radonezh, the founder of the Trinity-Sergius Lavra. The best souvenirs, brought from Rostov, will be the products with the famous Rostov “finift’” – the enamel painting.