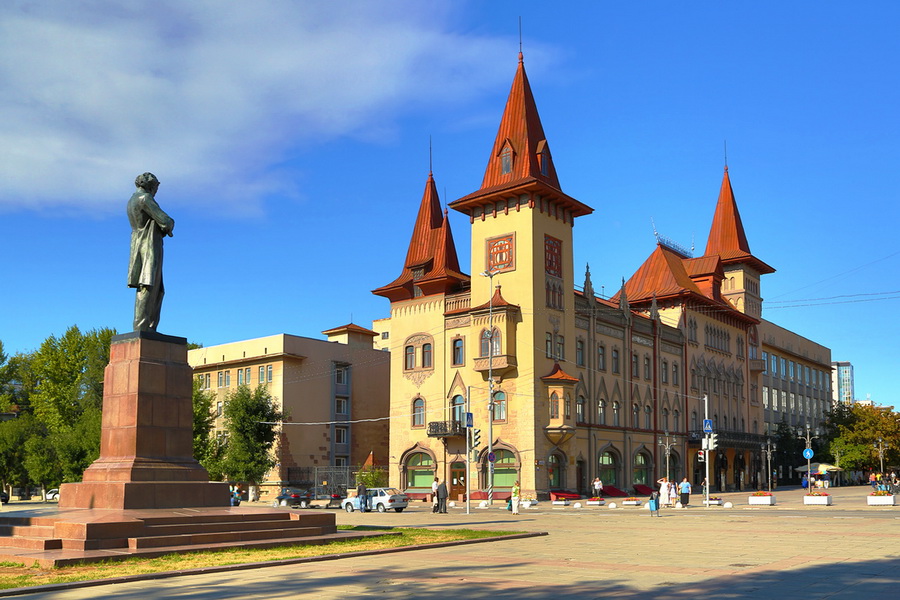 Tours, Attractions and Things To Do in Saratov

Full-flowing Volga gave birth to many cities. One of these cities is Saratov, a former center of the largest Russian province, a city of merchants, gold miners and first Russian manufacturers. Saratov is still has the charm of those times. Old farmsteads, bank buildings, retail and apartment houses – all that is a part of Saratov’s history, which are proudly demonstrated to numerous tourists now.

People go to Saratov not to find adventures. This region is deprived of high dangerous mountain hills, swift rivers, sea coasts, promising an exciting extreme leisure. Instead one can find here mixed forests, groves, woods, deserts and steppes. The mixed flora and fauna of Asia and Europe has created here unseen picturesque scenes. There are 124 monuments of nature here.

The natural diversity of Saratov region creates favorable conditions for active recreation both in summer and in winter. In winter, ski routes are ready for fans of skiing sport whereas during warm seasons fishing, hunting, active water recreation, namely rowing and canoeing, sailing, yachting, boat, motor boat and water scooter trips are available for toursists.

Saratov is located on the right bank of Volga, and surrounded on three sides with not high mountains. The city’s name originated from Tatar word “sara tau” – “yellow mountain”. The main trade routes from the Black Sea, Caucasus, Persia, Khorezm, and the Urals and, of course, from Russia ran across Saratov Povolj’e (Volga Region).

According to one of the versions, the city was established in 1584-1589 years approximately, on the place of a Tatar village, where Saratovka river fell into. Another version says that the city was found in 1590, and it was built as a guard point on the Volga way. The exact location of the first settlement was not established.

The town was burned down in 1613 year, and in 1674 was moved to the right bank of Volga River, that is to say, to its present position. Gradually Saratov became famous as a merchant city. That time people were engaged in pottery, selling of fish, salt and bread. The manufacturing production was well-developed. And Saratov became a capital of the Volga Region. It was the 3rd largest city after Moscow and Petersburg among the cities of Russia.

In 1722 Peter I visited this city on his way to Persia as well. In 1781 a famous rebel Emel’yan Pugachev which took the decision to occupy the city, entered Saratov. Those historical facts were described in the novel “The Captain's Daughter” by A.S. Pushkin. From a shabby town into which Saratov turned after Pugachev’s invasion, it became soon a rich merchant city and remained to be the largest cities of the Volga Region till 20-ies of XX century. In USSR Saratov was a closed city. There were several big enterprises of defense industry, particularly, the Saratov aviation plant.

Saratov is a motherland of many famous Russian figures. Nikolay Chernyshevskoy – Russian publicist, writer and literary critic, was born in Saratov. Such actors as Sergey Phillipov, Oleg Tabakov and Evgeniy Mironov were born here.

Many old farmsteads and hundreds of architecture monuments are preserved in Saratov Region. The cultural tourist complex “The Old City of Uvek”, which is situated on the place of an ancient settlement and whose prosperity period fell to the 12th century is not far from Saratov.