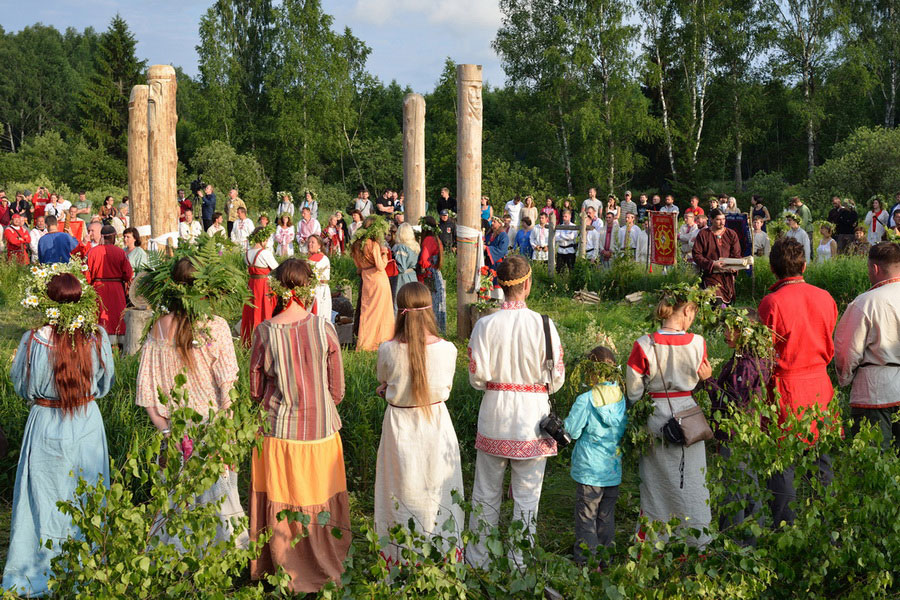 Since ancient times all peoples of the world have celebrated the end of June, the peak of the summer. Russia’s version of such a holiday is Ivan Kupala. On the night of 23 June, everyone celebrated this mystical but at the same time jolly holiday full of ritual acts, rules and prohibitions, songs, chants and all kinds of fortune-telling, legends, and beliefs.

Even in the time of the ancient pagan deity Ancient Russians used to have Kupalo, the God of summer fertility. In his honor people of sang songs and jumped over the bonfire. This ritual act has become an annual celebration of summer solstice, combining a pagan and Christian traditions. Kupala got the name Ivan after the baptizing of Russia, when he was replaced by John the Baptist (the way he was percepted by common people), who baptized Christ and whose birthday was celebrated on 24 June.

On that day people wore girths of flowers and wreaths of herbs. They reeled, sang songs, stoked bonfires with poles topped by burning wheel, the symbol of the sun.

Songs that were sung in villages mentioned Kupala as loving, clean, and cheerful. On the day of Ivan Kupala girls made wreaths of herbs, and in the evening let them float on the water watching them go away. The sinking wreath meant the end of love and that there would be no wedding.

Another tradition was to pour dirty water on everyone in sight. It was believed that the more often people run to swim the purer their souls would become. The most healing swimming was considered at dawn.

The swimming night was lit with purifying bonfires to dance around and jump over. The highest jumper was the luckiest. Mothers used to burn the shirts of their sick children in those bonfires hoping to get rid of the awful In diseases. Young people participated in noisy games, brawls, running competitions. The most played was the game of race-and-catch.

People believed that all the miraculous and healing herbs bloomed during Ivan Kupala night. Therefore, knowledgeable and experienced people, and especially the village healers never missed that night and collected medicinal roots and herbs to keep for the whole year ahead.

There was a rumor that at midnight fern starts to bloom. Miraculous fiery flower could point to a buried treasure no matter how deep it had been hidden. Around midnight a bud appeared on the wide leaves. It rose higher and higher and then started to ”jump” around. As midnight came, the ripe bud burst and a fiery red flower came out. No man could pick up the flower. But if you saw it any wish would come true.

There was always something miraculous about the day of Ivan Kupala. No one slept at night, since it was believed that all evil became active: witches, werewolves, vampires, mermaids ... People thought that Ivan Kupala was the day when witches had their holiday too, trying to cause as much harm to humans as they possibly could.

That was how the holiday of Ivan Kupala used to be - rituals, divination and other cheerful and lovely pranks...