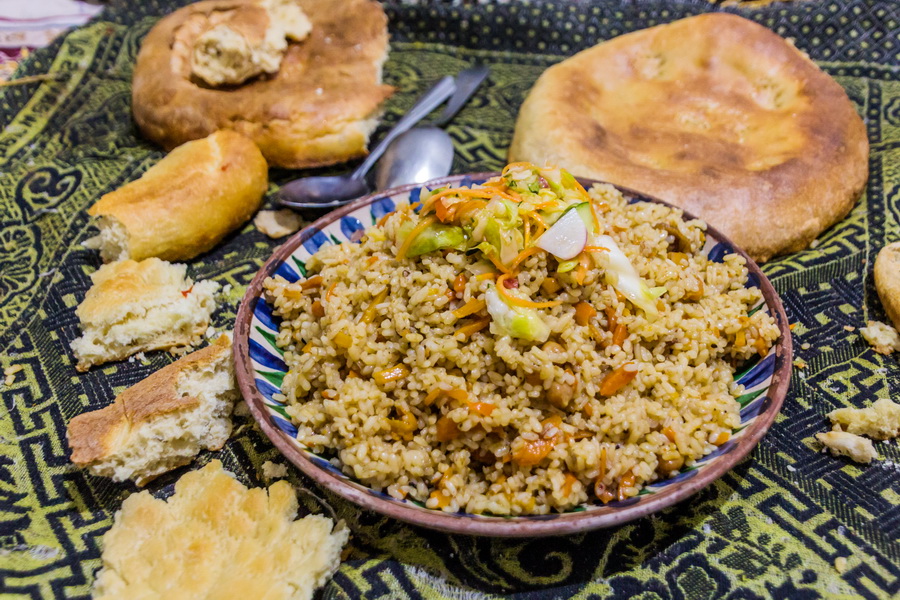 Tajik national cuisine includes many centuries-old dishes which remain popular in Tajikistan even today. Yet it is also a symbiosis of foods from the wider region. Tajikistan borders Uzbekistan, China and Afghanistan and foods from all three countries have been adopted into the local diet. Although the country also shares a border with Kyrgyzstan there are no Kyrgyz restaurants in Tajikistan.

Today in Tajikistan and particularly in the capital, international fare including Italian, French, Turkish, American, Chinese, Japanese, Russian, Ukrainian, Caucasian and Indian cuisine can all be found.

The most famous dish in Tajik national cuisine is kurutob, a recipe made with fresh flatbread, onions, tomatoes, cucumbers, sour milk and butter. Kurutob is eaten in nearly every home and local restaurant; in Tajikistan there is even a specific type of café, called kurutobkhona, which specializes in this dish.

Tajik cuisine also surprises with some truly exotic dishes such as kalapocha (soup with cow or ram innards) and gandumob (offal soup with chickpeas).

Tajiks eat a lot of seasonal fruits and vegetables which are available in some form almost year-round.

Many Uzbek restaurants in Tajikistan are named after cities in Uzbekistan. Tajik and Uzbek cuisine are quite similar, so in Uzbek cafes you can try slight variations of pilaf, samsas, laghman, manty dumplings and kebabs. Some Uzbek restaurants also offer kazan kabob (roast meat and potatoes), kazy (horse meat sausage), mashhurda (rice and mung bean soup) and traditional Uzbek sweets.

There are many Afghan cafes in Tajikistan where you can try Afghan pilaf, bolani (stuffed flatbread with meat or vegetable filling), chainaki (stewed lamb with vegetables), kuruti (similar to kurutob) and shola (rice pudding).

Turkish cuisine is mostly served as Tajikistan street food, but there are several Turkish restaurants that offer kebabs, pide and various salads and soups.

Japanese food in Tajikistan is mostly limited to noodles, miso soup and sushi with fish, shrimp, chicken or vegetables.

Tajiks love European cuisine. Although this mostly consists of Italian and American fast food such as pizza, burgers, hot dogs and french fries, a wider variety is available at select restaurants.

Many eateries in Tajikistan offer a combination of Italian, American, and French foods which Tajiks like, and select cafes will also include Turkish, Mediterranean and Japanese dishes on their menus.

Thanks to the Tajiks’ and Georgians’ mutual love of meat and beans, the Caucasian cuisine of Tajikistan mostly consists of Georgian fare. (Even the word “lobio” means “beans” in both Georgian and Tajik). Apart from lobio bean dishes, at Georgian restaurants you will find khinkali dumplings, khachapuri cheese bread, chashushuli stew, kharcho soup, pkhali salads, satsivi chicken with sauce, ojakhuri meat and potatoes and other famous Georgian dishes. Caucasian kebabs served on large skewers are common in both Georgian and European-style restaurants.

Tajikistan tours are sure to be a culinary adventure as you experience Tajik national cuisine and other regional fare.