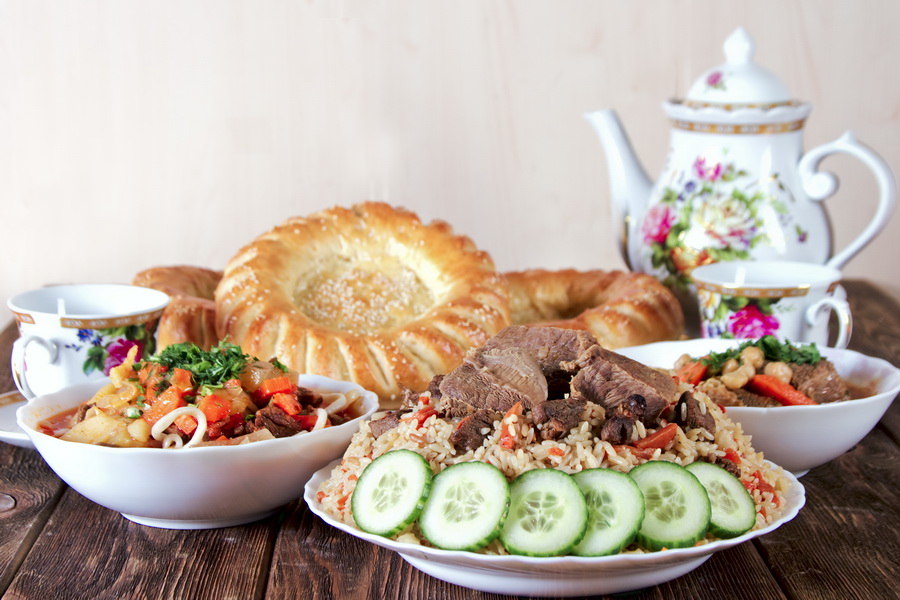 Tajik cuisine was born from a mingling of many Turkic peoples and cultures. Regarded as one of the oldest cuisines in the world, it was even mentioned in a 10th-11th century treatise by Avicenna (Ibn Sina). Some Tajik recipes have barely changed over the past thousand years, while dishes which have been adopted from other cultures are often modified in Tajikistan to accommodate local tastes.

Meat, grains, legumes, vegetables and milk serve as the nation’s staple foods. Traditional Tajikistan food is noted for its versatility, due in part to the fact that some of the Tajiks’ ancestors were nomadic and others were sedentary. The country’s unique mountainous, subtropical and continental climates have also played a role in food diversity, with winter foods generally high in fat and summer foods much lighter.

Tajiks are such a hospitable people that it is impossible to be invited to a Tajik home and leave hungry! It is customary to eat on the floor, sitting on kurpachi (soft mattresses stuffed with cotton wool) which are arranged around a dastarkhan, a large tablecloth on which all of the food is placed. 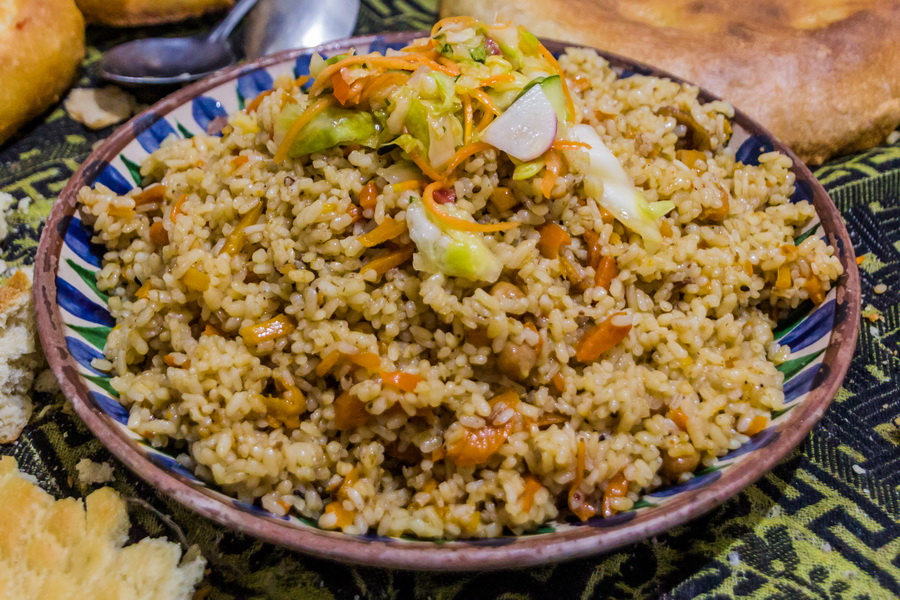 Meat is at the heart of Tajik national cuisine and is used to prepare dishes that surprise and delight not only tourists from abroad but also guests from neighboring countries. Meat in Tajikistan can be eaten in any form: boiled or fried, stewed or cooked in a traditional clay oven called a tandoor. Lamb is most popular, followed by beef, horse meat (of which Tajiks are very fond) and goat meat. Poultry is rarely served, but when it is then chicken and less often partridge and quail meat is used.

Grilled kebabs made from lamb or beef are a favorite national food in Tajikistan. They may be cooked either on a grill or over an open fire after marinating in pomegranate and lemon juice, vinegar, onions and wine.

One of the most beloved dishes in Tajikistan is pilaf, which consists of rice, meat, onions, carrots and spices. There are several types of pilaf in the country, for it is prepared differently in every region.

Other popular Tajik meat dishes include:

It is impossible to discuss Tajik meat dishes without mentioning vazha (vazhda), a famous meat sauce. Vazha can either be a gravy made by simmering meat over low heat or a sauce created by combining meat juice with vegetables and spices. 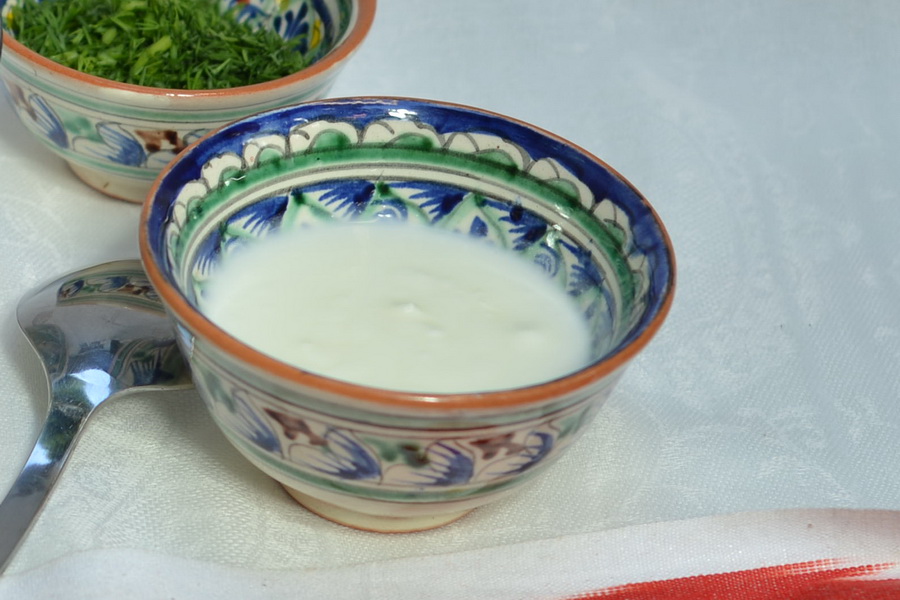 Dairy products in Tajikistan are present at every meal. Guests are most likely to be offered katyk (kefir) and kaymak (sour cream).

Chakka (suzma), which is made from katyk, resembles Greek yogurt and is served with many dishes. Dried chakka is called kurut, a popular snack which comes in many shapes and flavors. The most popular variety is kuruti mastchoh (mountain matcha), which is not a reference to the Japanese green tea but to a region in Tajikistan called Matcha. 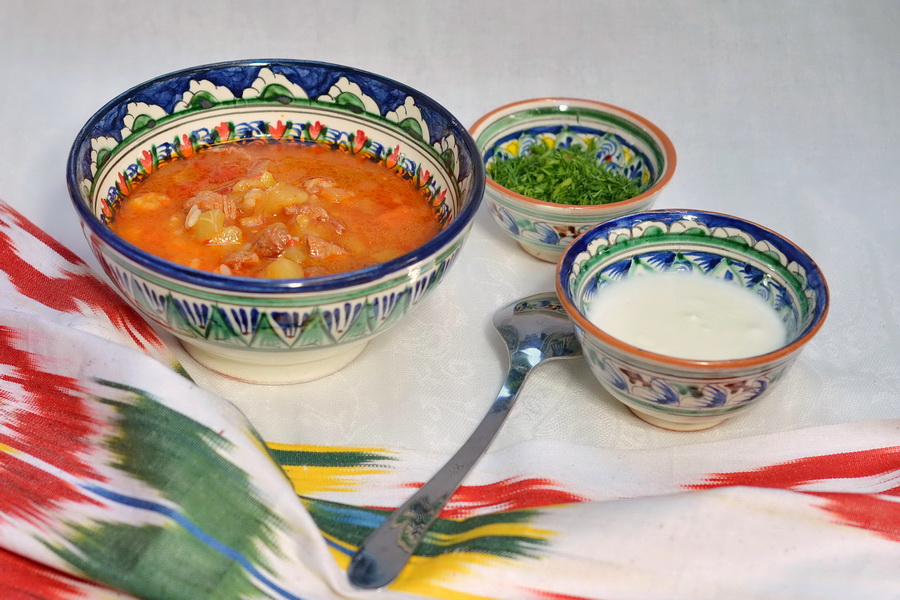 Tajikistan food has gained recognition thanks in large to its soups, which are usually prepared either by pre-frying the ingredients or by boiling them directly. Along with meat broths, soups with vegetables and herbs are also common. Almost all of the soups are thick and are served in large bowls called kazakhs.

The most popular Tajik soups include:
- kalapocha, a broth made from lamb or cow entrails;
- mastoba (mastova), a filling rice soup;
- gandumoba, made from offal, wheat, chickpeas and beans;
- shurbo a soup laden with potatoes;
- birinch, made with meat, rice and green beans.

…and some less common but no less tasty soups:
- ugro, a noodle soup with meat;
- naryn, a dish of thin noodles and horse meat in broth;
- shavlya, a rice soup with meat;
- manpar (mampar), made from lamb, vegetables and small chunks of dough;
- oshi-burida, a light soup of noodles, peas, beans and sour milk;
- siyokhalaf ("black grass"), made from a mountain grass of the same name which is cooked in sour milk;
- lubiyova, a bean soup with wheat, meat and beets. 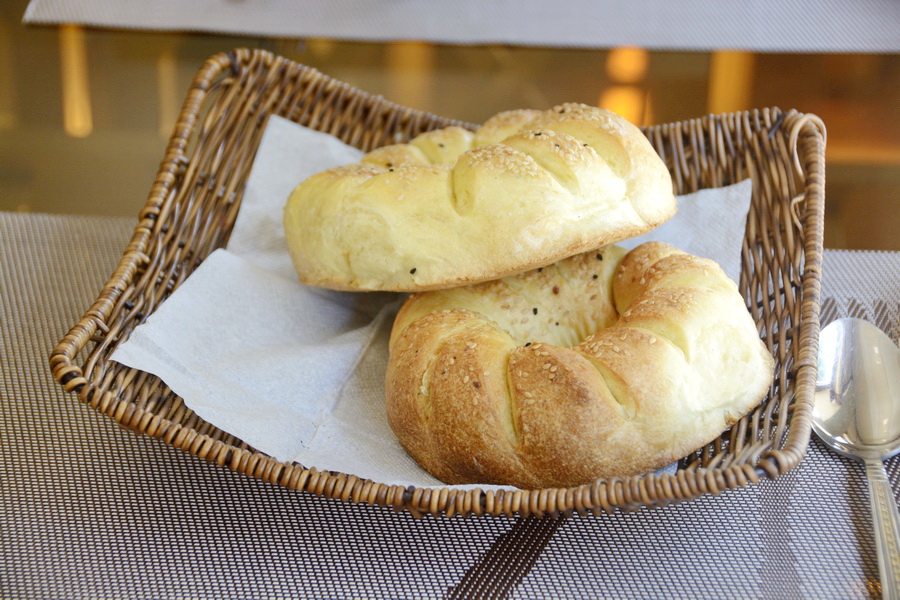 Tajik bread takes center stage at every meal, for without  the presence of fresh, round loaves a meal just cannot be served. Studies indicate that the average Tajikistan resident eats up to 10 kilograms of bread per month. Tajiks treat their bread with great respect- it cannot be thrown away, placed face down, cut with a knife (it should instead be torn with the hands), or placed on an unclean surface such as the floor. After a meal, crumbs are removed from the table by hand and should not be thrown into the garbage.

Tajik breads are often flat and round in shape. They include both yeast and unleavened doughs and flaky, dense and airy varieties. The largest loaves are prepared in Gissar, Rasht and Kulob Districts and are a true work of art. There is also a special Dushanbe bread which is made from two types of flour. 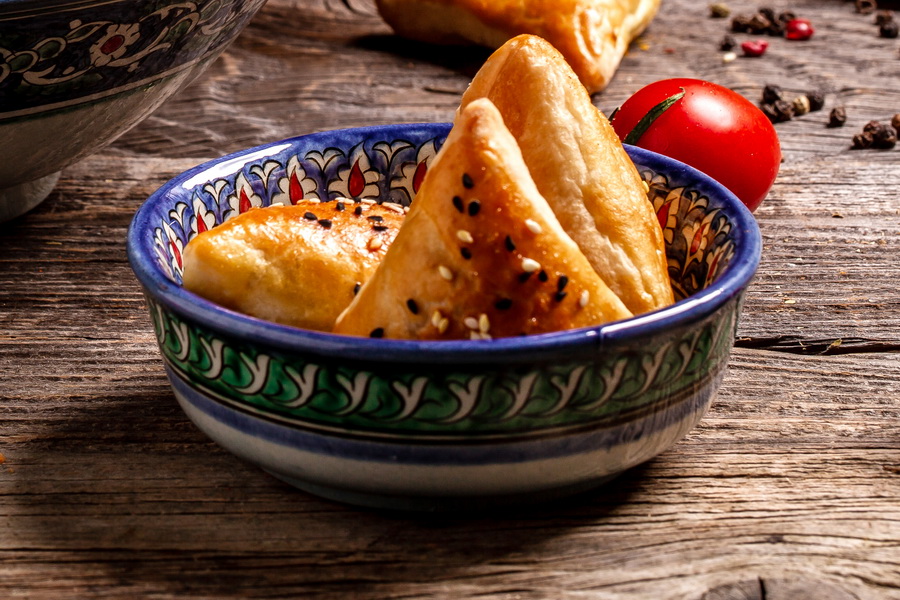 When it comes  to dough products, Tajik cuisine overlaps with its Uzbek, Kazakh and Kyrgyz counterparts. This commonality can be seen in mantu (manty) dumplings stuffed with juicy meat and in laghman, a tasty dish of fried meat with vegetables and noodles.

Yet there are also unique Tajik dough products. Sambusas are individual savory pies baked in a tandoor oven. Barak-shurpo are special Tajik dumplings with herbs, while khushan are essentially mantu made with both meat and chickpeas.

Tajikistan is famous for a dish called kurutob. It consists of fresh, flaky tortillas which are torn into pieces and topped with sour milk, onions, tomatoes, cucumbers and either butter, linseed or cottonseed oil.

Oshi tupa is a dish made from peas, turnips, noodles and greens, and shima consists of fried meat, vegetables and noodles. 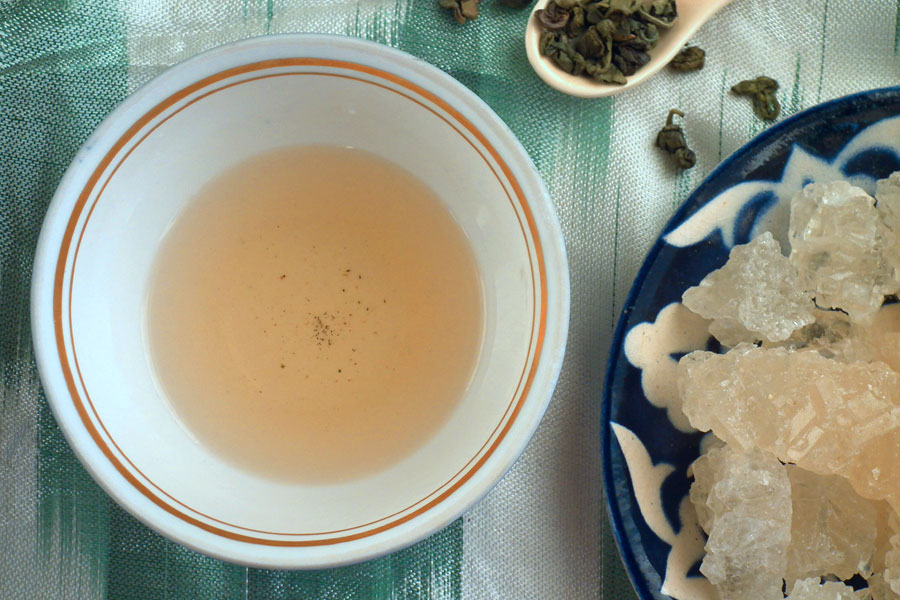 Green tea is the national drink of Tajikistan. It is enjoyed year round but especially in summer, when it is believed that drinking hot beverages will expel excess heat from the body through sweat, which in turn will cool a person off. Black tea is less popular and is mostly drunk in winter. Shirchay (shircho), a drink made from tea, milk, butter and salt, is less common than regular tea yet still very popular.

Cold Tajik drinks include sorbet, made by mixing berries or other fruits with sugar, and arches, made from sour yogurt and water. Tajiks also love cholob, a fermented milk drink in which chakka yogurt is combined with mint, basil and ice. 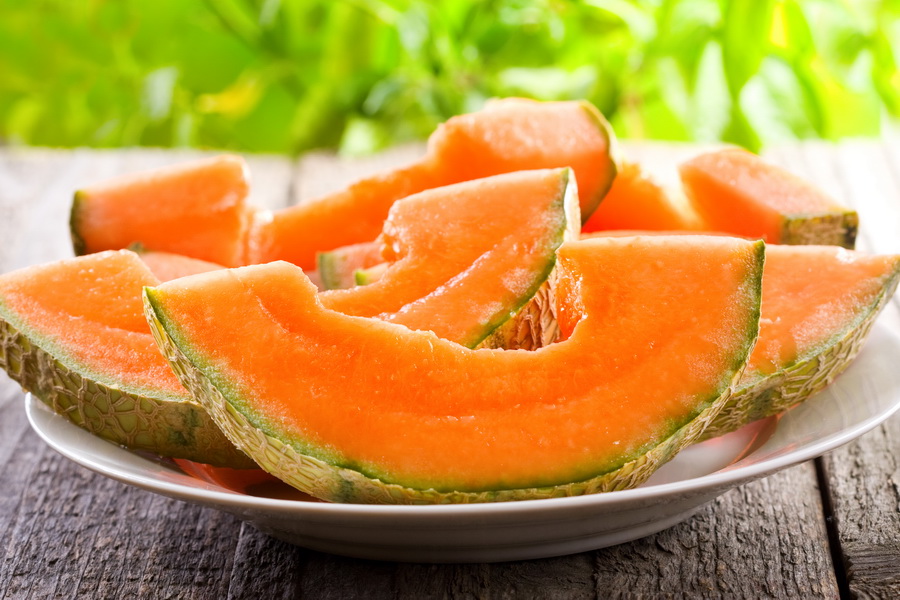 Tajik cuisine would not be complete without desserts, which may be served not just after a meal but also before the main course. The most common Tajik sweets are fruits and melons, which are eaten fresh in summer and autumn and dried for the long winter months.

An ancient, satisfying dessert is fatirmaska, which is prepared from ghee and small pieces of puff pastry called fatira. The ingredients are mixed and formed into a round mound on which indentations are made with a wooden spoon to hold pieces of melon or grapes.

Noshhafpa is a mixture made from dried apricots and flour which is believed to ward off colds. Tajik children have been known to fake an illness in order to taste this sweet and satisfying concoction!

After trying Tajikistan food, most people discover their personal favorite dishes and keep going back for more! 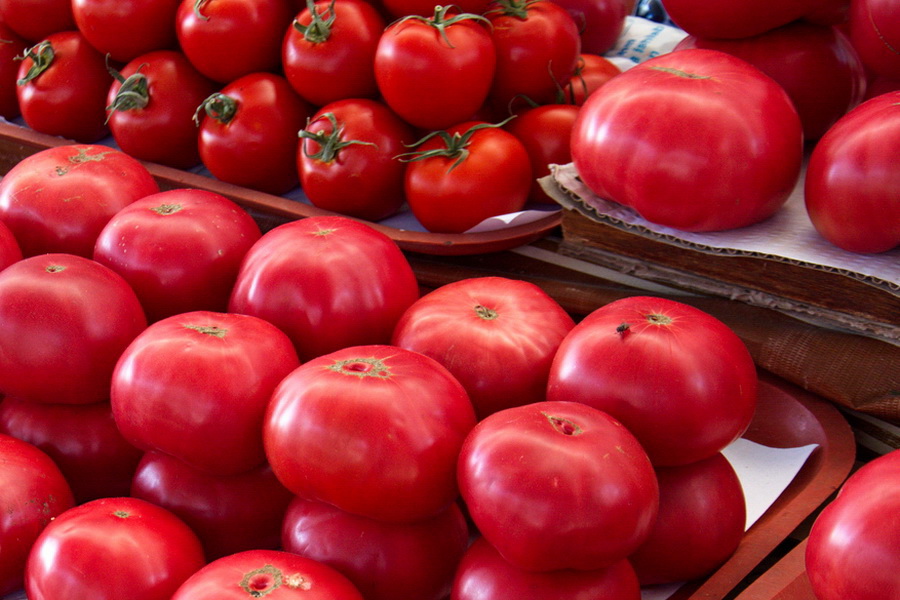 Tajik salads and vegetable dishes have long been part of local cuisine, due in part to the fact that many Tajiks have always been sedentary and engaged in agriculture. Vegetarian visitors who have grown weary in meat-heavy Kazakhstan and Kyrgyzstan will have much to look forward to in Tajikistan!

Select Tajik salads and vegetable dishes may be enjoyed year-round, but for optimal selection we suggest that you visit in late spring or summer.