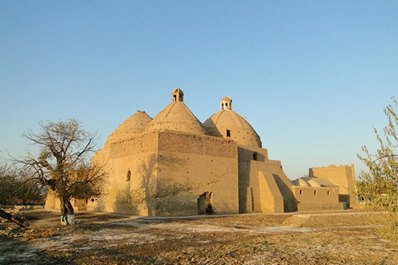 The mausoleum is a part of the memorial complex consisting of a mosque and a tomb. As a matter of fact they are several buildings constructed in various periods. They stay so closely to each other that it is difficult to imagine the original shape of the structure. The mausoleum of Astana-baba is a 11th - 12th-century monument of architecture. It is the place of "zyuarat" - a regular ritual of worshipping of holy men observed by visiting pilgrims. No one knows for sure who Astana-baba was. But the place where the mausoleum stands is considered sacred and healing. Thousands of sick people gather there annually to receive long-awaited healing. The number of pilgrims grows with each day.

Astana-baba complex includes the mausoleums of Zed-Ali and Zuveid-Ali. The legend about them runs: "The ruler of Balkh (medieval Khurasan) had a beautiful daughter Zuveida. She married the viceroy of the territory but soon after the wedding she died. The mournful father brought the best masters from Merv and Samarkand so that they constructed a beautiful mausoleum in his daughter's memory. However, the mausoleum collapsed right after it had been built.

The same happened to another one and so did to the third. The father was desperate but soon afterwards he saw an old man in his dream. The old man advised him to erect the mausoleum from clay and the water brought from Mecca. The inconsolable father did as he had been told. The soil was mixed with the clay brought from Mecca and the water from Mecca was poured into a well and was used for construction. Soon the mausoleum was completed and after the death of the ruler his body was buried next to his daughter ".

The water in the well was used for the construction of the mausoleum of Zeid-Ali and Zuveid-Ali and is considered holy.