Architectual ensemble Lyabi-Khauz is formed with three large monumental buildings: Kukeldash Madrasah in the north, khanaka and Nodir Divan-begi in the west and in the east. From the south the square was closed with Trade Street. The center of old Bukhara large ensemble became a reservoir.

The name «Lyabi-Khauz» means «at reservoir». According to the old legend, for a long time knan gardener Nadir Divan-begi could not buy a lot for planned building, where a house of alone woman was. Then all-powerful vizier ordered to built a channel under women's house, and the water began to washaway walls, unhappy women had to sell this lot. The khan hauz secretly was called «khauz of violence», what in arabian inscription gives numerical meaning of building date - 1620.

The khauz rectangular (36 – 46 meters height), stretched from the east to the west, is buried in shadow of venerable chinaras. Its shores are formed with stair launch to the water, made from massive blocks of yellow limestone. In old times there was «tea bazar», there sold sweets, dainties, bread and made food. 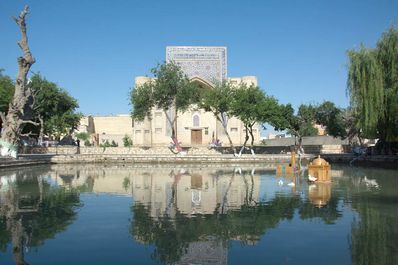 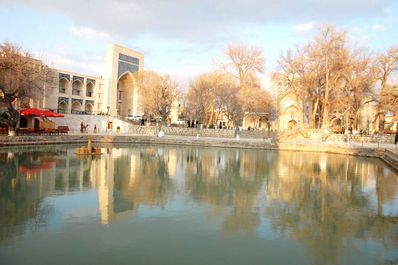 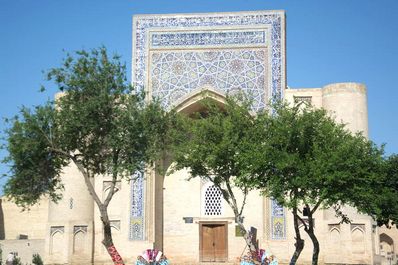 Kukeldash Madrasah (1568 - 1569) is the largest in Bukhara (80x 60 meters). It is built on traditional diagram of eastern institution – boarding school. However for the first time in madrasah built in rabid, light, ventilated hujrs leaded by loggias on the free yard to the streets of city. They open on the second floor on side-facades. Living apatment is equipped with modern amenities, as Ulugbek Madrasah in Samarkand, butr there is three-part apartmenton the first floor, consisted of ayvan, housing and household apartments. In darskhana 4 crossing archs, stretched from corner to corner diagonally with netted décor, carry the light.

On the west side of Laybi-khauz is one more architectural monument. This is Nadir Divan-begi Khanaka (1619 - 1620). It is great multicells building with central cupola hall, with undeep niches on sides. In the building corners are living hydjras.

On the eastern side of khauz you can see a facade of curious architectual building – Nadir Divan-begi Madrasah. At first this building was built as caravan-saray in Madrasah, joined to main facade loggias, portal and corner towers. At this time second floor was built. On longitudinal axis, across from entrance peshtak is, traditional in caravan-saray, passage to the back yard, destined for pack cattle.