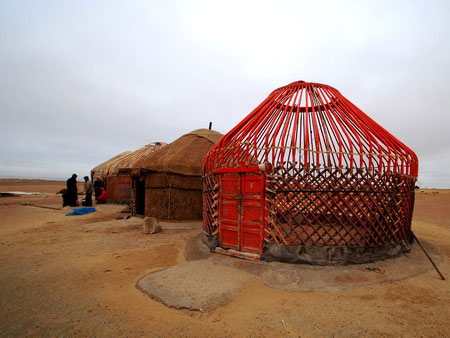 The price includes full board.

Ayaz-kala yurt camp is located near the ruins of Ayaz-Kala fortress (4-2nd centuries BC). As it is commonly known, yurt is a traditional transportable housing of the Central Asian nomads who could assemble and disassemble it at any place to spend the night. Some of these yurts with a capacity of 2 (5-rope yurts) up to 20 people (15-rope yurt) are located in a very picturesque place. The camp is located in the wild steppes, at the distance of 30 kilometers to the nearest town Buston, 80 kilometers - to Urgench with the international airport and railway station and 110 kilometers to Khiva - city-museum under the open sky.

There is a view opening on Sultanuaizdaga ridges on the one side and on Ayaz-kul lake on the other. Earlier, one could travel to this place from Khiva and Urgench through Beruni pontoon bridge across the Amu Darya River. A new modern and more convenient bridge was built this year, it is already travelled by tour buses.

Tourists staying in a yurt camp are offered to ride a camel, explore the ancient ruins of the Ayaz-Kala complex, consisting of three settlements named Ayaz Qala - 1, 2 and 3 and located in the hills of varying heights.

The interior furnishing of residential yurts consists of thick cotton mattress and blankets used both as beds and seats, there are also copper jugs with water for washing and a stove. There are 2 shower rooms and 2 restrooms not far from the guest yurts. A separate yurt is used as a dining room where guests gather for a meal, and a separate kitchen is arranged with three pockets. There are three couches at the territory of the camp: one is with a canopy and two without it. Tourists can use them to relax and enjoy the warm evenings, the sunset and the stars. In the evenings, musicians from the local village organize concerts for tourists, who are enchanted by the melodies of the Uzbek, Karakalpak, Kazakh, Turkmen and Russian peoples.