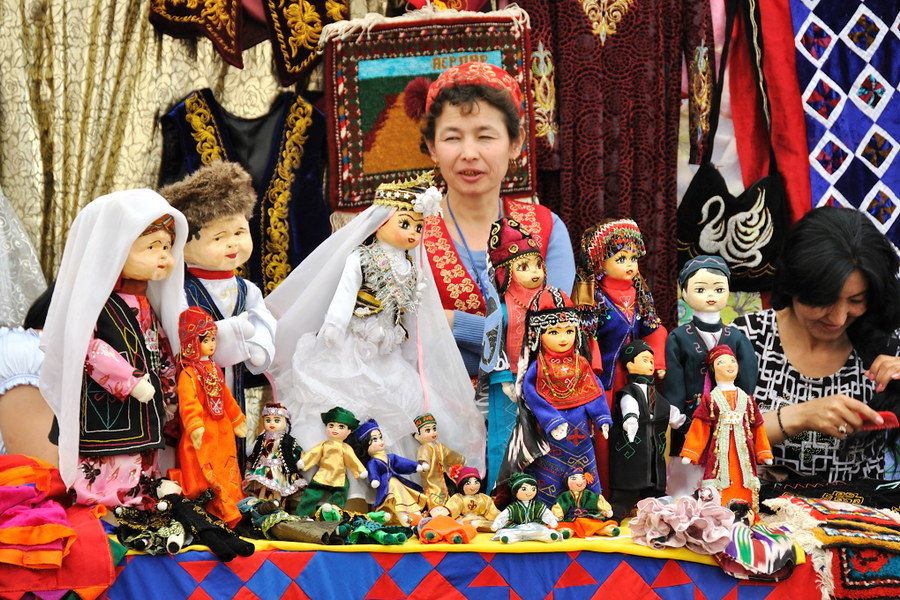 Karakalpaks form the main indigenous population of the Autonomous Republic of Karakalpakstan that is a part of the Republic of Uzbekistan. Karakalpaks occupy the southern coast of theAral Sea and Amu Darya delta. The composition of the Karakalpak people include various ethnic elements, so the culture of this nation has many faces and resonates with the cultures of other Central Asian peoples.

Turkic tribes, wandering through the territories of Central Asia for a long time, had a huge influence on the Karakalpaks’ culture. Historians traced the relations with Pechenegs, Oghuz, Kipchaks, the Golden Horde, Kazakh, Turkmen and Uzbek tribal alliances in the Karakalpak tribal division.

Despite the centuries-old ties with the nomadic associations the Karakalpaks retained a peculiar type of farming, combining farming based on irrigation, sheep-herding and fishing.

The tribal division was of great importance in the culture of the Karakalpaks. The whole territory of the Karakalpakstan was divided between two confederations of tribes: Arys and Kungrats. Arys confederation joined over 12 tribes, which consisted of 100 clans. They mostly lived on the territory of the right bank of the Amu Darya. Kungrat tribes, respectively, occupied the left bank of the Amu Darya.

Traditionally, there were two types of dwellings in Karakalpakstan - yurts and mud dwellings or “tams” - dwellings of sun-dried bricks. Karakalpak yurt had some differences from the yurts of neighboring nomadic peoples, it was expressed in some detail of the design, internal and external decoration.

“Tam” was a large rectangular building with a flat roof. It consisted of one or two accommodations. The fireplace, storage rooms, stables and an indoor courtyard “uyzhay” with yurt inside were hollowed out in the walls. Its entrance was closed with the large wooden gate. It was mainly a winter shelter, in summer the Karakalpaks preferred to live in a yurt outside the house.

Weaving, carpet weaving, felting, weaving mats, making clothes stand out among traditional Karakalpak crafts. Karakalpak male costumes did not differ a lot from those of Uzbek men’s. They wore a white tunic shirt, wide at the step trousers tucked into boots, loose-fitting coat of dark cloth of small strips, and in winter - a sheepskin coat, wool inside.

The Karakalpak clothes differed only with quilted jacket – “beshpent” which they wore under their robe. Dark flattened round lambskin hat “Kurash” was used as head-dress. In ancient times, the Karakalpaks wore high conical felt hast “takyya-kalpak”, for which they received their ethnic name “karakalpak” - “black hat”.

Women's costume also consisted of a shirt, pants, the coat, but they often wore vest instead of camisole. Karakalpak loved wearing bright colors with a predominance of red and blue, lots of embroidery and metal ornaments. They did not wear the veil; it was replaced with the coat-shaped cape “zhegde” that didn’t not cover their faces. The women usually wore a long scarf tied over the tubeteyka like a turban.