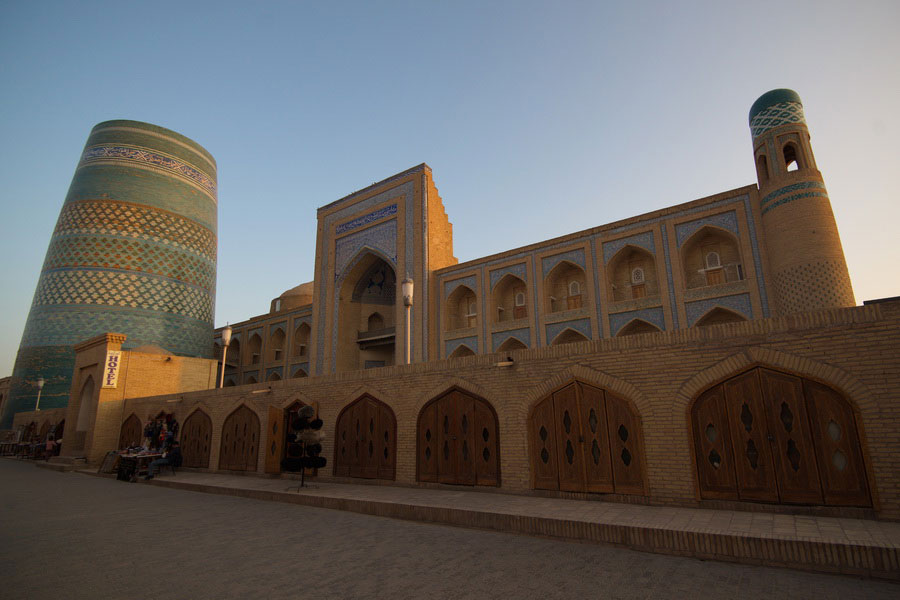 The Madrasah of Mukhammad Amin-khan is one of the main sights, located in the historical district Itchan-Kala. It is the largest madrasah not only in Khiva but in the Central Asia. The two-storied building occupies the area of 72 to 60 meters and has 125 khudjras (cells), intended for 260 students. The unique of this madrasah is that each khudjra consisted of two rooms and khudjras on second floor consisted of room and loggia, looking out the facade.

The Madrasah was built in 1851-1854 by the order of Khiva ruler Muhammad Amin-khan and was named after him. The building of the Madrasah of Mukhammad Amin-khan has five domes and flank towers. The facade is decorated with rich ornament of glazed brick, wooden doors abound in ornamental carving, majolica face impresses with herbal patterns. Above the entrance there is the inscription in Arabic: “This wonderful building will stay here forever to descendants’ joy”.

The Madrassah of Muhammad Amin-khan is located opposite another Khiva sight – Kunya-Ark, next to Ata-Darvoza gate. Just in front of the building there is one of the main symbols of the city –  the minaret Kalta-Minor, which was also constructed under the guidance of Muhammad Amin-khan. But the ruler was killed and the construction of the minaret which was to become the highest minaret in the world was not finished. Its height is only 29 meters instead of 70 meters.

Formerly the Madrasah of Mukhammad Amin-khan was one of the richest educational institutions and held numerous wakf lands. In addition, The Chancery of the Supreme Muslim Courtyard was located in this building. Today the building of the Madrasah of Mukhammad Amin-khan includes a tour agency, hotel, currency exchange office and cafe.This magnificent building preserved its historical look and even after a century it amazes residents and visitors of Khiva with its greatness.