Nowadays thousands of pilgrims from all over the world are coming to Nurata to visit a cult complex, well-known within the whole Asia, whose center is a holy spring (“chashma”). One of the legends runs that one beautiful day a meteorite, radiating light, dropped on the earth and generated a spring gushed in the place of its fall, giving the water with healing property. This was how the name of the “Nur” locality originated which means “Light”.

The spring is located not far from the ruins of “Nur” fortress founded by Alexander the Great himself in the IV century BC. The fortress ruins still represent an interest for scientists since it is one the most ancient monuments in the territory of Uzbekistan. The dig revealed that the fortress was built on a hill and was surrounded with a vallum. One of the features of the fortress was its water supply systems built by order of Alexander the Great. It was an essential measure because the fortress had a strategic function due to the fact that is was located on the border between the agricultural settlement of Marakand (Samarkand) and the territory of the savage nomads raiding the settlement from the North. In case of invasion, the fortress defenders had to have a free access to water. 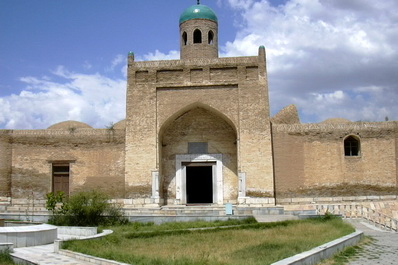 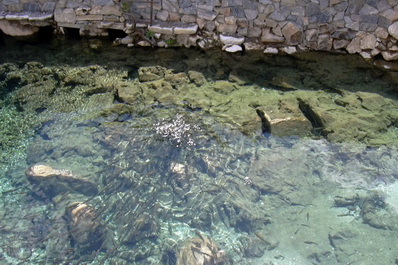 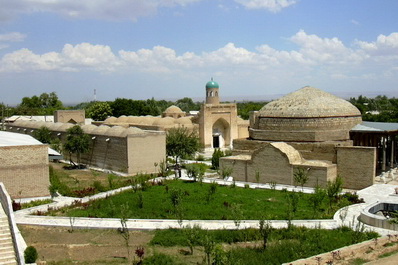 In spite of constant collisions the life in Nurata was in full swing. People from century to century were moving in Nurata and step by step a small city sprung up around the spring which now became one of the most visited Muslim sanctuaries in Central Asia.

Today, in addition to the spring, the complex includes a Juma mosque, bath-house, mazar and ancient mosque Panjvakta. The oldest monument in the territory of the complex is the mosque Panjvakta. It was built in the XVI century. The other one, the Juma mosque was erected in the XVI century too, but in later period. The interior of the mosque includes wood engraving and other elements of Central Asian décor.

The mazar located not far from the spring is of great value too. Narshahi, the famous historian from Bukhara described the “Nur” fortress with a graveyard situated nearby in his monumental work “The History of Bukhara”. According to him it was the place where followers of Prophet Muhammad who saw him personally were buried. Thousands of pilgrims from all over the Muslim world are coming there to prey in this holy place.

The spring itself is famous for its healthful properties. Its water composition includes various minerals which contribute to healing from many diseases, but the main medicine for anybody who came to the spring is the belief in its miraculous effect.