Hazrat Hyzr mosque is located on the south of Afrasiab fort. The area of the Mosque is 30 x 16 m. It stands on a natural elevation where a steep stairs leads. The mosque consists of aivan and khanaka. The mosque’s aivan (an indoor canopy standing on the columns) is richly decorated with ornaments. There is an entrance from aivan to khanaka (a monastery for dervishes). Hanaka is square, with mihrabi niche with the direction to Mecca in the middle and two hudzhry (monks' cells) on the sides. The minaret is located separately. It consists of a trunk with a spiral staircase and a crowning lantern with ribbed dome. 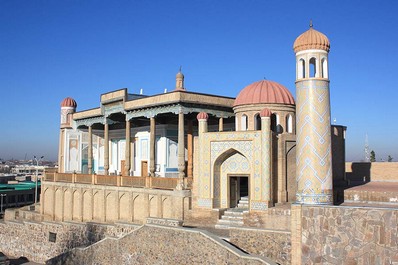 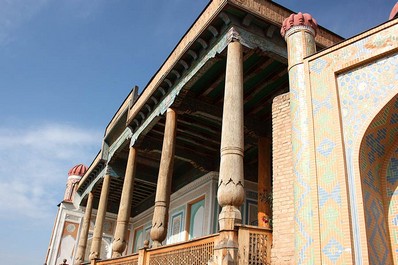 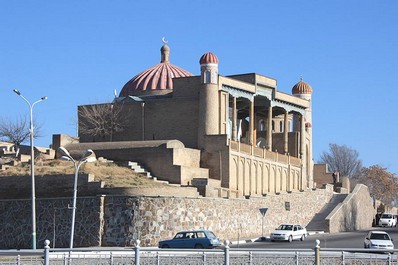 The facade of Hazrat Hyzr mosque consists of a high base with arched niches, quince, over which the west is closed guldastoy (corner semi-tower) with the brick facing. The aivan’s top includes a number of bricks. To the east, the system includes a mosque organically portal darvazahany with guldastami and beautiful carved gates. This series closes eastern minaret. Subtle feeling manifested in the performance of the master carved door. Here division and ornamentation are made with a shallow profile, which in this case well, because the contrast shadow quite clearly reveals the shape of the ornament, while preserving the integrity basis. The building is replete with dates that mainly indicate restoration time; majority of them belong 19-20th centuries.