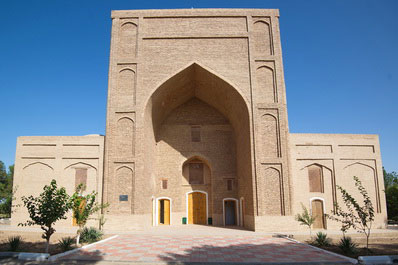 Khanaka-Mausoleum Kokildor-Ota is distinguished by its architecture and unusual planning. This is the portal-domed construction, with many chambers and brick wall on the front. It should be noted that the idea of building a three-stage frontal, open facade, which was used in the complex of Sultan- Saodat, was repeated here too. Its plan was symmetrical by composition: there was a deep terrace with a main entrance and large hall with a dome in the center; on their sides, almost parallel, were placed two rooms across the corridor in a mirror composition. So, the rectangular entrance led to a central hall and lateral entrances to the joined rooms and corridors that were laterally to them. The interior is decorated with amazing patterns made of ganch. In the interior hall there are gravestones, the largest one belonged to Kokildor-Ota.

The portal of this building was typical more for the Temurid epoch (XV c.) than to the architecture of Mawarannahr in the XVI c. Archeologists suggest that it could have been redecorated in the epoch of Temurids. Probably the reconstruction of the monumental structures was carried out at the same time with the complex of Hakim at- Termizi and Sultan Saodat. It should be noted that Kokildor Ota Khanaka is one of the most signinficant monuments of Termez.