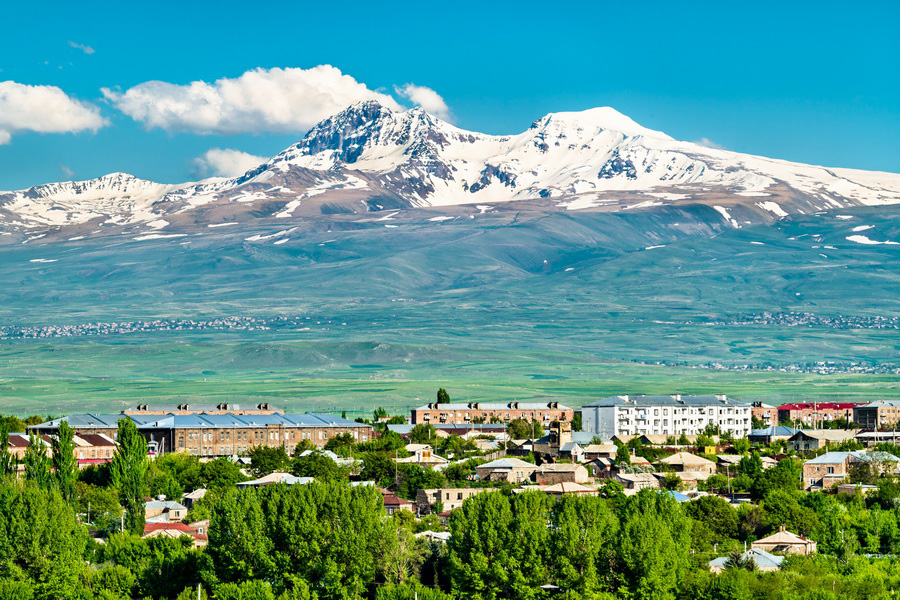 The extinct Aragats volcano is the highest mountain on the territory of modern Armenia and Transcaucasia rightly is among the most memorable attractions of the region. Mount Aragats itself is a majestic natural monument with four tops and a lake in the middle.

Long time ago the eruption accompanied by explosion destroyed the mountain top. And now the four tops surround the crater like the petals of some huge flower: the northern is 4,090 m, western – 4,080 m, eastern – 3,916 m, and southern – 3,879 meters. For centuries after numerous eruptions and earthquakes the entire mountain has become covered with rocks and stratifications of tuff.

The slopes of Aragats are cut by deep gorges, the largest of which are Gekhovit and Amberd of 500 m depth. In the gorge of Gekhovit there are three waterfalls of over 100 m height. A number of big and small rivers originate in Aragats; the Kasagh and the Gekhovit, the Amberd and Sevdzhur are among them. The green carpet of the Alpine green covers the mountain from late summer to early autumn.

The Alpine landscape of Aragats with its diversity of colors, water springs pure mountain air is very beautiful. Even in summer on the steep top adjacent slopes of Aragats you will find small snow fields neighbored by snowdrops and other flowers. The panorama opening from the mid-mountain part and the belt at top – shining mountain lakes among the emerald green of slopes, lonely hills disappearing in fog is as beautiful.

The beautiful landscape of the foothills and mountain belts, numerous monuments of culture on its slopes entitle Aragats to be included in the row of the most interesting peaks attractive to travelers and Alpine climbers.

There are a lot of legends and fairy tales about Christianity introduction and St. Gregory the Illuminator connected with Mount Aragats . Aragats has always drawn attention of travelers by its ruins of the monuments of ancient civilizations.