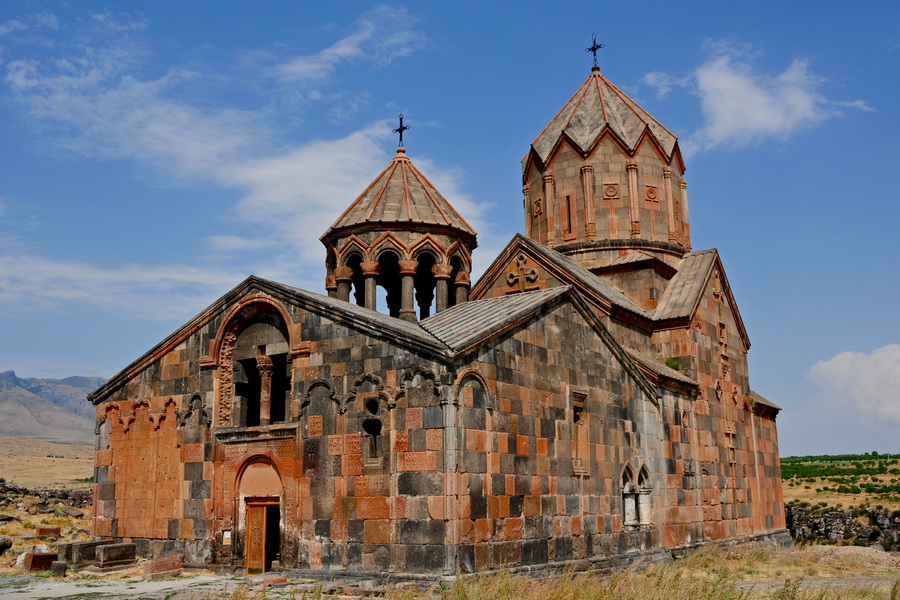 In the early 4 th not far from the village of Karbi St. Gregory the Illuminator founded a little church which was the basis of Ovanavank monastery. In its present condition Ovanavank monastery is represented by buildings of the 12 th – 13 th centuries. The complex appeared in 1216 when the prince Vache Vachyutian founded Surb Karapet church (1216-1221). The monastery was built on the caves and is connected to the gorge by means of the staircase.

The fourth-century church lies in ruins now. You can see them near the most ancient structure of Ovanavank – the basilica erected in the fifth century. It was rebuilt in 573 and was repeatedly renovated afterwards. The temple ' s vestibule was built in 1250. In 1311 the memorial column on the stepped pedestal was erected in the western part of the monastery.

Ovanavank monastery complex consists of three closely adjacent buildings shaping an almost regular rectangular. The monastery territory is surrounded by the wall which protected it from the invaders in the Middle Ages.

The main temple – Surb Karapet - is a Greek-cross design with two-level aisles in all corners. It is distinguished by intricate decoration. The temple's facade has a carved cross and miscellaneous geometrical ornament. The southern wall of the temple and its high dome resting on the dodecahedral drum were destroyed in 1919 and are under restoration. The masonry of the monastery buildings is very interesting: red and black stones in staggered order.

The vestibule of Ovanavank is attractive by its 12-column rotund belfry of 6.5 m in diameter - the largest one in Armenia . The belfry was built after the vestibule around 1270 during the capital repairs of the building.