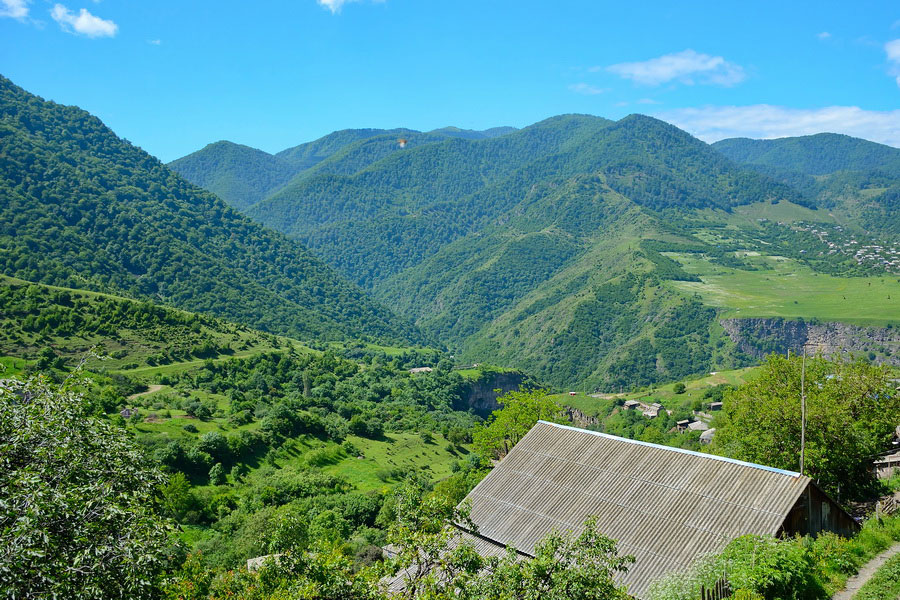 The marz (province) of Lori is located in the northeast of Armenia, bordering Georgia. This marz is famous for its mild climate, since the Lori-Pambak Mountains stand in the way of cold winds from the north. Lori can also brag about the abundance of rivers – the Pambak, the Dzoraget, the Debet and the Agstev flow across this picturesque region, rich in fertile lands, lakes and mineral springs. Evergreen trees and bushes grow in the river valleys; the slopes of the mountain ridges are covered by subalpine vegetation. Lori is the land of mountain ridges, stepped slopes, and deep gorges. Here you will see Pushkin Pass, where in 1828, on his way to Erzurum, Alexander Pushkin saw the body of Alexander Griboyedov, a Russian diplomat, poet, and composer, being transported to Tbilisi.

The area's history is very interesting. Its rich cultural heritage has formed for dozens of centuries. There in the 10th – 11th centuries was the independent Armenian state – Lori Kingdom. A part of the marz used to be the hereditary estate of Zakaryan dynasty. The marz is also known for rare samples of Byzantine architecture – Haghpat and Sanahin Monasteries were built in the 10th century and now listed as UNESCO World Heritage Sites.

The region is rich in natural resources and industry, too. There are famous copper mines in Lori Province, as well as textile and chemical factories, and a growing agricultural center. Thanks to policies that promote moving away from Yerevan and to the regions, the cities and towns in Lori Province are growing too.

The center of Lori Province is Vanadzor, the third largest city in Armenia, after Yerevan and Gyumri. Vanadzor is located in an unusual site, in a valley between the Bazum and Pambak Mountain Ranges, and at the confluence of three rivers: the Pambak, the Tandzut, and the Vanadzoriget.

There is no exact evidence of the city's age, except for the fact that it stands on the site of ancient settlements which were a part of Great Armenia in the 2nd century BC. It is assumed that in the 13th century the city was named Karaklis, which translates from Turkic languages as “black church”. Until 1828 the city had had a black church, which was replaced by a new one in 1831. In 1801, Lori was annexed to Russia along with Georgia, and Karaklis became a frontier city. In 1820 the city's population was only 500-600 people who had moved from Yerevan. In 1830, after East Armenia became a part of Russia, several hundreds of Armenian families who had come from western Armenia (Kars, Ardahan, Bayazet and Erzurum - now in Turkey) settled there.

From 1849 Karaklis was a part of Yerevan province. In the 1930s it was given the city status and in 1935, after the death of Kirov, the city was renamed as Kirovakan. The name Vanadzor was given to the city in 1993. The convenient geographical position and abundance of mineral waters made the city famous as popular resort.

On December 7th, 1988 there was a terrible earthquake which caused a serious damage to the city, but thanks to the patience, hard work and love of the people the city was revived. Today's Vanadzor is a beautiful modern city with wide straight streets, magnificent buildings surrounded by green gardens. It is one of the major industrial and cultural centers of Armenia.

More about Marz of Lori Landmarks