The St. George’s Monastery of St. Nino, sometimes also called the Bodbe Monastery, is one of the most important religious sites and attractions in Georgia. Today, there is a nunnery where the monastery used to be, and the St. George Cathedral, part of the monastery, holds the remains of St. Nino, Equal to the Apostles, who brought Christianity to Georgia. There is also a new cathedral being built, using much of the same construction methods used to make the most famous cathedrals in Georgia centuries ago. 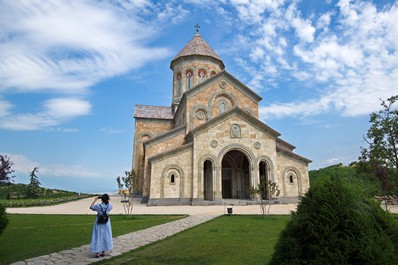 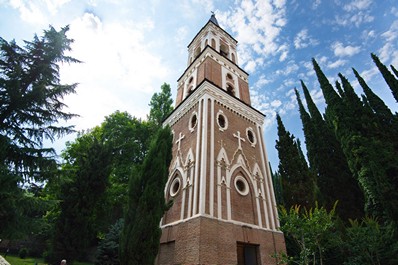 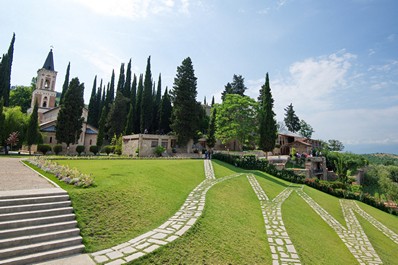 According to legends, St. Nino died at the age of 60 in Bodbe in the year 335 CE. During her lifetime, she had crossed the entire country, healing people and preaching Christianity. She asked to be buried in Georgia, where she had spent her life. Later, King Mirian decided to move her body to Mtskheta, but all efforts were in vain: the coffin couldn’t be moved. Originally, a little temple in honor of the martyr St. George was built on this place, but this temple didn’t survive. In 850, the newer Cathedral that stands today was built on the spot of the older temple. This new temple follows classic design principles, following the best traditions of Georgian architecture. The interior has a few 9th century frescoes, with lots of additions from the 12th through 17th centuries. 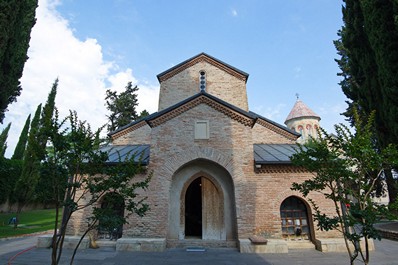 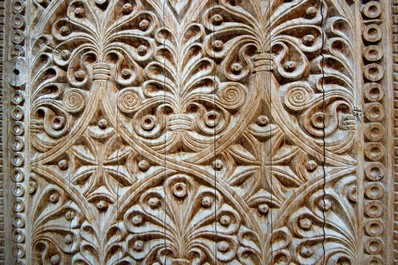 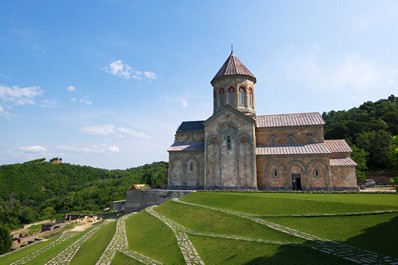 When Tsar Alexander III visited Bodbe, significant changes were made. A Russian bell tower was built, and the frescoes inside the main church were redone with Russian influences. When Alexander arrived, he looked at the impressive view over the Alazani Valley from Bodbe and said, “Why do we need Switzerland when we have this?”

The religious complex at Bodbe was repeatedly repaired and restored. In the 16th through 17th centuries, Bodbe was an important educational center. In 1837, the monastery was closed, but was opened again in 1889 under the support of Alexander III, but was closed in 1924 under the Soviet Union, when it was used as a hospital. In 1991, Bodbe opened as a convent for nuns. The 10-15 nuns living here are largely self-sufficient, growing plants and raising animals, as well as selling jewelry and other items in a small shop.