VVerniy fortress was arranged and public and civil buildings were designed by engineers of Turkistani and West- Siberian military districts, graduates of Saint-Petersburg Engineering Academy, the Institute for Civil Engineering and the Communications Institute: Leonard Alexandrovski, Tsezar Gumnitski, Apollon Kamenogradski, Nikolai Krishtanovski, Pavel Zenkov and his son Andrei - these are the first ones. The first town architect was G. N. Serebrennikov (1839-1883), the author of the first cathedral in the name of Blessed Virgin the Patroness. In 1934 the Cathedral was destroyed together with the churchyard  because of the Komintern Square. Today, Amangeldy Imanov Park is situated here.

The second and the last architect of the town in the years preceding the Revolution was a Frenchman, Paul Gourde (1846-1914), who invented the first ever emblem of Verniy, which was validated 19 March , 1908, and created the first relief map of Simirechye, presented at the World Exhibition in Paris. He pioneered the first archaeological excavations in Almaty and contributed a lot in the town’s culture which resulted in his being awarded the title of the Town Citizen of Honor.

The town merchants were great patrons of art. There were churches, military institutions and schools as well as public services and amenities were built at their expense. Verniy had 11 mosques, two synagogues, a Roman-Catholic church and Orthodox churches. Only few of the latter are functioning nowadays— Turkistan Cathedral, revived on the Ascension Day in 1995, and Malostanichny Church in the name of the icon of the Kazan Blessed Virgin, the heavenly protector of Semirechye, which was constructed back in 1871 in memory of founding of the Cossack stanitsas. 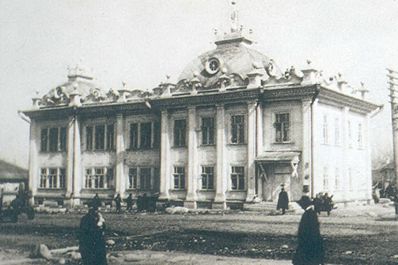 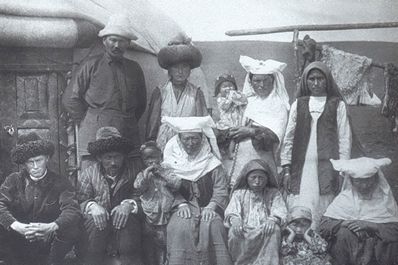 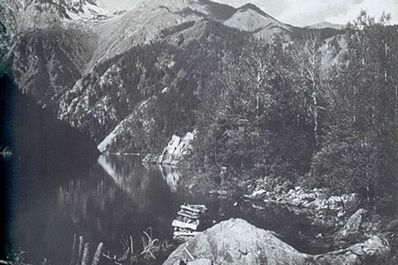 The squat one-storied structures were the result of the local architectural decision not to erect high stone buildings in an area subject to frequent earthquakes. Seeking to preserve Verniy's architectural image, the builders employed traditions of wooden architecture as an echo of the past. Wooden structures were crowned with hipped roofs and decorated with various traditional carvings. Such buildings decorated dusty and ill-equipped streets. Forged open-work signboards were fixed at the carved porches: "Trade House of G. A. Shakhvorostov and Sons", "Successors of Commerce Councilor N. I. Ivanov", the "Europe" hotel, the "Paris" restaurant, fashion houses "Warsaw" and '"Vienna" where ladies' hats and shoes were sold, the "XX Century" cinema. Telephone, electricity, automobiles, water conduit appeared. The only regional newspaper "Semirechye Gazette" wrote, not without irony, that "under conditions of an epidemic disease of seeking to maintain the reputation we should rather think of renaming Verniy…"

Starting from 1869 the town began to extend to the south-west of Bolshaya Almatinskaya Stanitsa. The first town blocks of buildings appeared along Tashkentskaya Alley (the today's Raiymbek Avenue). The Sennaya Square (nowadays it is the square before the Young People's Theater) became the central square of the town where the grand Protection Cathedral was constructed. Yet the first construction experience proved unsuccessful and the buildings were unable to withstand  the nature’s challenge. On 28 May 1887 the town was completely destroyed by a devastating earthquake.

Eyewitnesses said that the earth shokes awoke the sleeping town at 4. 35 am. Within five minutes the shokes turned into ruins the best buildings of the New Town, including the governor's mansion, 4 school buildings, the archbishop's house, the Cathedral named after the Blessed Virgin the Patroness. At that hard time the town authorities tried to support people by both words and deeds. The governor A. Frid did not cease to provide assistance by supplying bread, clothes, and medicines for town-dwellers. The honorary senior citizen of the town Seid Akhmed Seidalinov arranged yurts and hot meals, provided shelter for those suffered in the neighboring auls.

Right Reverend Neofit held a national service in the field church. The burial service was held in a field tent-church for the 332 victims of the earthquake, mainly children who died of heavy injuries, after which their bodies were committed to the ground.  Unfortunately, years after, this cemetery (the present-day Park of the 28 Panfilov Division Guardsmen) was destroyed. Together with it the memory of this terrible tragedy in the city's history also sank into oblivion.

Already then, at those distant times, they started developing scientifically valid regulations for construction in the town situated in a seismological zone. Yet, due to high costs of the projects the builders made use neither of recommendations by the scientist I.V. Mushketov nor of the proposal to apply new construction materials and structures when erecting buildings put forward by local architects. After the earthquake of 1887 Verniy becomes a solely wooden, one-storied and squat town.