Another problem of town improvement always lays in the development of the town territories. The first general plan of 1868 drawn up by N.I. Krishtanovsky and P.M. Zenkov was approved by general-governor of Turkistan Territory in 1874 when they had already started building the town. Besides, only 443 land arpents were left for the construction of the town after the reduction of lands for estates and pastures. That is why the town's territory increased at the expense of development of the fortress of Verny (1854-1889), Bolshaya (1855-1927) and Malaya (1860-1962) Stanitsas, Tatarskaya Sloboda (1857-1962) and the town's other suburbs which constitute today Medeu District of Almaty.

According to the poet Vyacheslav Kiktenko. the city in the past was divided into three unequal parts: up to the river, along the river, and beyond the river.

Verny up to the river resembled a model village founded by migrants from various parts of Russia rather than a town: a sturdy izba, a yard around it enclosed with barns, sheds, cellars, ice-houses, bath-houses, stables, awnings for household paraphernalia, and other outdoor buildings. The settlers brought their local methods of construction, their tastes, customs and cults into architectural arrangement of the first streets in the "New town"'. For example, they would pour blood of a slaughtered rooster upon bearing stones of the foundation. They would put corns under the lower rim to become rich, incense — to be protected from evil spirit, wool — to be warm. It is interesting to note that peasants would bring to Semirechye the dearest things: wildflowers in tubs from Siberia that would be smelling sweet on cold days on the windowsills, flat heavy stones carefully wrapped in rags from the Volga River region (the stones were used as a press when making sauerkraut). Well, as to flowers, stones, and the sunshine, nobody would have been in need of them in the mountainous Semirechye land. Yet, the rural way of life had a negative impact on the town's look and development. The land lots purchased for building houses were actually used for fanning and gardening, for arranging farmyards and inns. A new type of the town dweller appeared, the town kulak. 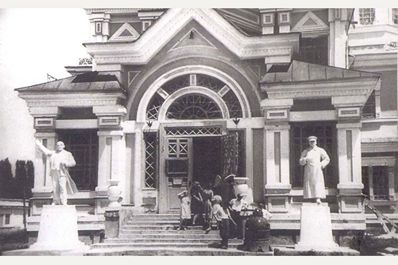 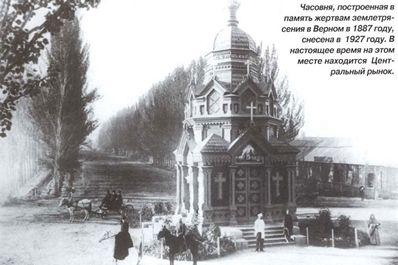 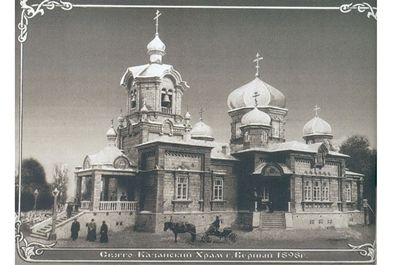 Up to the river the town was grouped along one street, once named Sobornaya and later – after General Kolpakovsky, then —after Lenin (Ilyich) and now - Dostyk Avenue which connects the city's business center to the Medeu Tract suburbs. In 1875 the destroyed fortification wall was replaced by launched construction of the spacious Gostiny Dvor which became a covered market one hundred years later. Here there is the Eternal Fire in the City Park, a large Orthodox cathedral was reconstructed, ruined by a grandiose earthquake of 28 May 1887. On that very day that is hard to forget, on May 28, 1887, the earthquake also destroyed to the foundation trade and industrial centers of the Kuznetsovs, Pugasovs, Ivanovs, Lutmanovs, Ogorodnikovs, situated in the territory of the today's Abai Square and Avenue. In memory of those killed by the force of nature a chapel was built in the center of the Gostinodvorskaya Square (the chapel was demolished in 1927).

The territory along the river and beyond it was the town of craftsmen and merchants. Up to forty agricultural and industrial enterprises grew on the banks of the full-flowing and rough Almatinka River (which became quieter after the mudflow of 1921, having found apparently subterranean channels) as well as along its hydro-technical canals. Working suburbs and town houses appeared around untiring water-mills.

This area beyond the river was divided by the today's Abai Avenue into lower and upper garden plots. In 1896 the banks of the mountainous river were connected with a bridge. It was constructed probably by the engineer Nikolai Naranovich. However, people's memory retained it as Pugasov Bridge after the last name of the first guild merchant, the town's patron of art Nikita Pugasov. "It is not so easy to burn the bridges and their names, as we are walking along Pugasov’s Bridge, as many years ago…" said the poet about this engineering structure of the past.

It was here, at the mill famous at least for the fact that here after the earthquake of 1887 they would feed the dwellers of the destroyed town with bread for free, that Nikita Pugasov started his business activities. The merchant lived not far away from the crossing. Only a century-old oak-tree is left in the place of his estate, a peculiar embodiment of the merchant's well-being. Nothing more. Only the poet's words: "However, it is not simple to burn names and bridges, if we go again across Pugasov Bridge, as before, you and me. "

In 1978, Medeu Tract, plateau Kamenskoye, the territories of the farms Koktyube and Gorny Gigant were included into the city boundaries. The territory of the city increased up to 172. 38 square kilometers. Nowadays the western and north-east parts of the city are directions of the most active in growth of the city territory. There they construct the housing estates of Taugul, Mamyr, Kamenka, Baganashyl, Koktyube, and Gorny Gigant. Construction of the Samal micro-district where they erect monolithic 9-, 12- and 14-storied buildings will soon be completed.

Decades in the life of the city have passed. The Big Stanitsa was destined to become the capital of the Soviet Kazakhstan. Later it turned into the "Southern Capital", into a city where the modern history of the sovereign and independent Kazakhstan began. Alma-Ata was drawn in the whirlpool of political, social, and economic events as a result of which both the Union of the Soviet Socialist Republics and the Kazakh Soviet Socialist Republic ceased to exist. On 30 August 1995, the new Constitution was adopted. Almaty became the first free city in Kazakhstan, a special administrative and territorial formation of an all-country importance, the center of cultural, scientific, financial, economic, and political life of Kazakhstan.