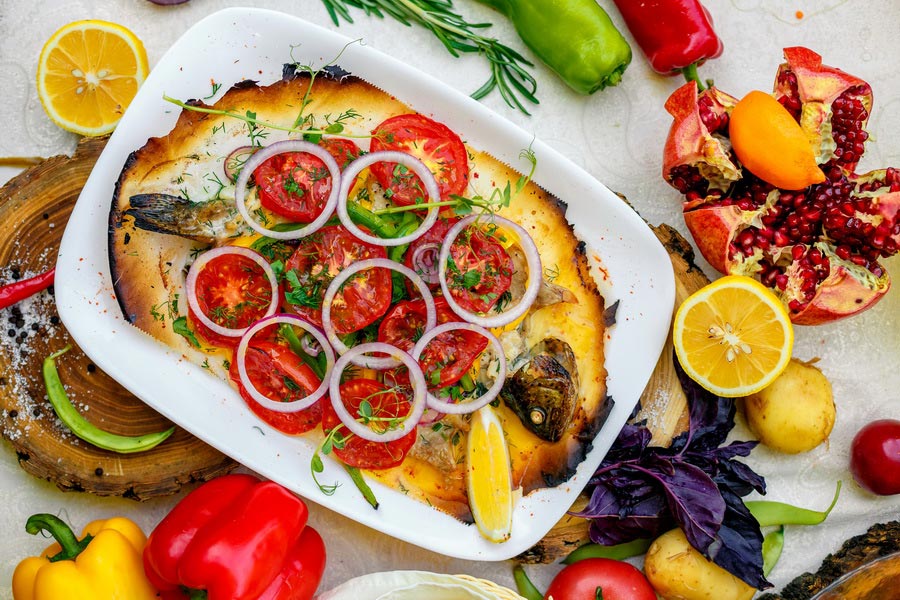 Kazakh fish dishes were historically only eaten in settlements on the banks of the Caspian, Aral and Ural Seas and the Ili, Irtysh and Syrdarya Rivers. Although still much less common than meat dishes, fish-based meals are now served in every city in the country.

To prepare koktal, a special cocktail bowl in the form of a metal box with a grate and a lid should be used. A large fish is cut along its ridge and laid opened like a book on the metal grate. When the fish is slightly smoked, thinly chopped vegetables  - usually onions and tomatoes – are spread on top of it. It is customary to serve koktal in the cocktail bowl on which it is cooked, since the fish takes the form of the cocktail bowl after it is cooked and can easily break. For this reason too the scales are not usually removed before cooking koktal and other fish in Kazakhstan.

South Kazakhstan is famous for a dish called karmà. Fish without small bones such as pike perch or carp are boiled, cut into small chunks and mixed with chopped boiled noodles. A large serving of butter is added as a finishing touch, and when made in homes some of the broth in which the fish was cooked may also be added to karmà before serving.

Kazakh fish dishes also include a unique soup which has long been a staple in coastal communities. To prepare Kazakh fish soup, the fish is cooked in a broth along with onions, potatoes and small, square noodles made from a thinly rolled dough.