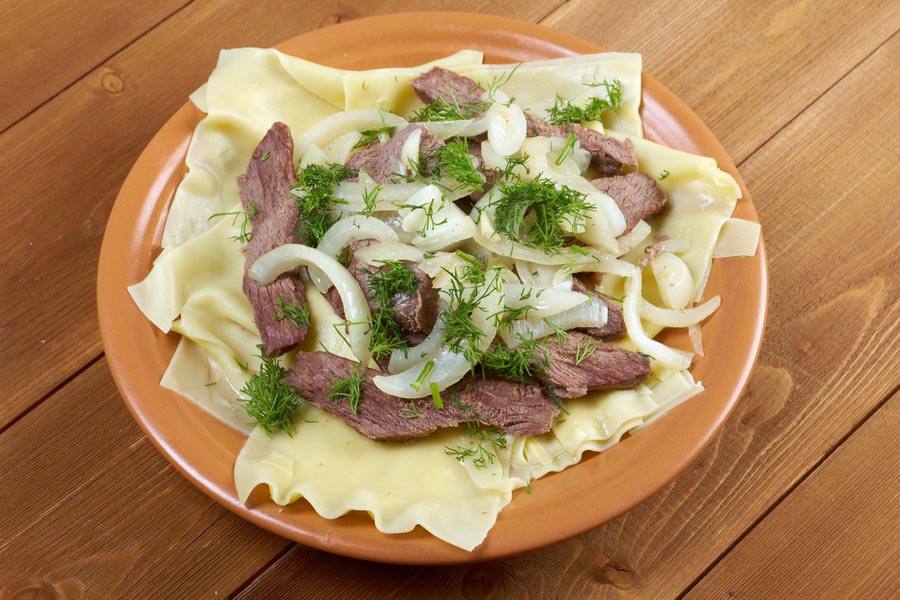 Traditional Kazakh meat dishes were for centuries the primary source of strength for nomadic Kazakh tribes, who in past times ate meat and dairy products almost exclusively. Meat would often serve as a standalone meal and would be curated before long trips for future consumption.

Several of these traditional meat dishes remain popular in the country even today:

Besbarmak (beshbarmak) is the king of Kazakh cuisine. The name translates as "five fingers" and is derived from the customary way of eating this dish - with your right hand. The dish includes boiled horse meat, lamb or beef (sometimes with camel meat added), square doughy noodles, onions and the broth in which the meat and dough were cooked. When serving, the meat is cut into small pieces and placed atop the noodles while the broth is served separately in large bowls. Besbarmak is also simply called "et" (meat), and in Russian is known as “Kazakh-style meat". When served during the holidays, it is often topped with horsemeat sausage called kazy (see below).

A meal of besbarmak is steeped in traditions which should be observed before eating. The most honored guest is given the koi-bass, or boiled lamb head. The recipient then cuts the head into pieces and gives them to other guests. Every part of the head matters. For example, the ears are given to young men so that they can grow in attentiveness and the palate to girls so they will be able to work hard. The drumsticks are reserved for distinguished guests (usually the elderly), the brisket for young daughters-in-law, the cervical vertebrae for married women and the kidneys and heart for young boys so that they will mature faster.

Throughout most of Kazakhstan besbarmak is prepared in the traditional way with meat, boiled dough and broth. In Kyzylorda Region rice is used instead of dough, and in northern cities such as Nur-Sultan, Kostanay, Kokshetau, Pavlodar and Petropavlovsk you may be offered besbarmak in a traditional dish called an astabak (astau).

Kuyrdak was the first Kazakh food intended for long-term storage. Its name comes from the word kuyru, which means “to fry”. Usually comprised of small chunks of roasted lamb and onion, it is one of the quicker Kazakh meat dishes to prepare and so is often served to guests before the main course of besbarmak.

In lieu of meat the animal’s liver, kidneys and lungs were traditionally used, but in modern Kazakh cuisine meat has become an increasingly common alternative. Today kuyrdak can even be made from beef, in which case potatoes, carrots and onions are usually added too.

Real kuyrdak is actually canned: The meat is fried in a large amount of liquid fat and then placed in a jar, covered with the fat and sealed. When stored as such in an airtight container kuyrdak can last for a long time, and shepherds are known to take it with them when they leave home to pasture their flock.

It is impossible to discuss Kazakh meat products without mentioning a homemade horsemeat sausage called kazy. A traditional kazy recipe calls for tender meat from the horse's ribs, which is combined with a little fat and stuffed into a washed and brined intestine that is boiled for at least 2 hours. It is customary to taste the sausage while it is still hot. Kazy may be raw, smoked or dried and is designed for long-term storage.

There is another type of horse sausage called shuzhyk (shuzhuk), which resembles kazy but can be prepared from any part of the horse. It is stuffed into the small intestine and is not as tender as kazy.

Syrne (sirne) is a Kazakh meat dish consisting of a whole roast lamb with onions and potatoes. It was created at a time when there were no refrigerators and all of the meat of an animal had to be cooked at once so that it would not spoil. Since this produced a large amount of food, the neighbors would also be treated to a meal. The neighbors would in turn make the dish and share it with the whole district too. To make syrne, the meat should roast for 5-6 hours until it becomes very tender. Onions and potatoes are traditionally served with the lamb, although modern variations often include a wider variety of vegetables.