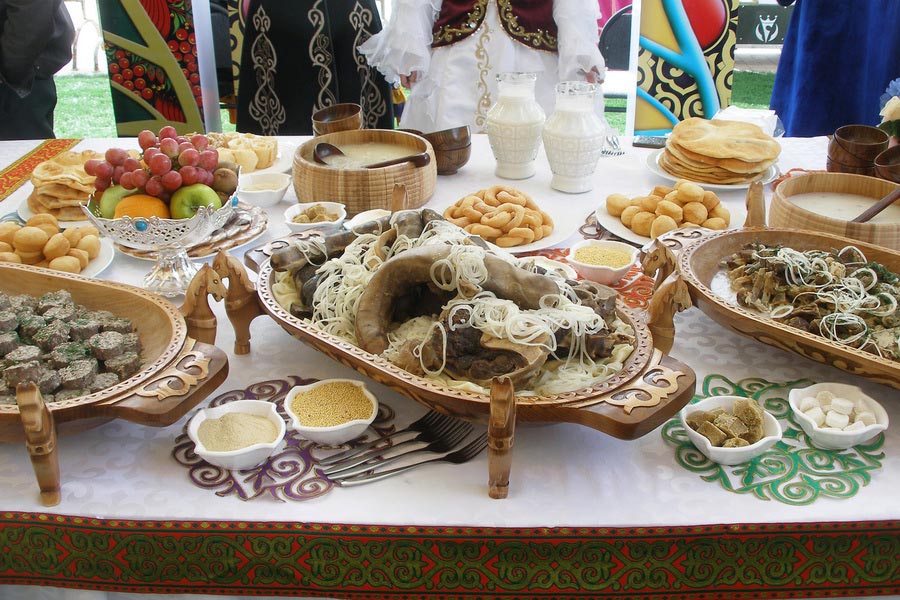 There are several Kazakh main dishes which are commonly served and very popular with Kazakhstan residents and visitors alike. Most of these dishes include a combinations of red meat, onions, dough and sometimes rice or vegetables.

Without question, the most popular food in Kazakhstan is besbarmak. The national dish of Kazakhstan, it consists of boiled red meat, large homemade noodles and a savory broth in which the meat was cooked. It is traditionally eaten with the hands from a large communal plate.

Manti (manty) are dumplings made from thin dough and minced meat, the meat of choice in much of modern Kazakh cuisine. The meat is mixed with onions and spices before being placed in the center of a thinly rolled square of dough. The dough is then bunched up around the meat so that the filling cannot be seen. The manti are steamed and are usually eaten hot with a sour milk sauce.

Laghman originated in Uyghur cuisine, yet since Kazakhstan is home to the second-largest community of Uyghurs in the world this dish is now considered local fare. Kazakh laghman consists of lean fried meat, vegetables and long noodles. The noodles should be stretched by hand in one of two ways: the dough is either unwound like a rope and then pulled into a skein or is rolled out between the palms and stretched. Laghman in Kazakhstan may be served with or without broth, with noodles or with rice. There are about 60 types of laghman including guiru, suiru, boso, tsomyan, dzhusay, moguru, ganfan and kabyrga, and each of them is worth trying!

Palau (pilaf) has become one of the most popular Kazakh main dishes in recent years. The dish is prepared with either lamb or beef and onions, carrots, rice, garlic and spices. Pilaf is usually served with a tomato and onion salad.