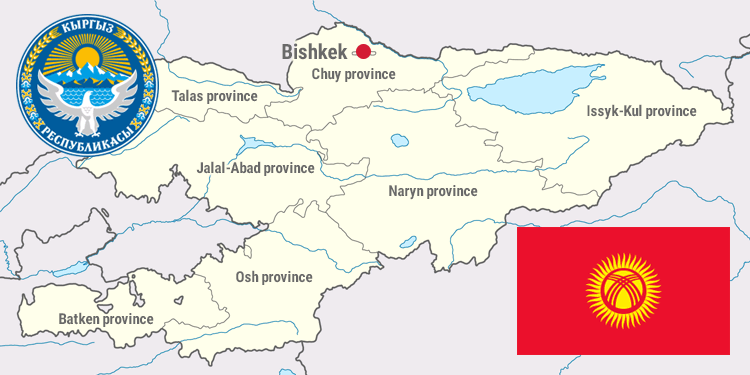 Location: Kyrgyzstan is located in Central Asia, bordering Kazakhstan to the north, Uzbekistan to the west, Tajikistan to the southwest, and China to the southeast. Most of the country is mountainous, with the Tian Shan range taking up most of the central part of the country. This makes Kyrgyzstan a spectacularly beautiful place for hiking and relaxing in nature. Even though Kyrgyzstan is far from the ocean, the shores of Lake Issyk-Kul make for an ideal beach vacation. The landlocked climate means that summers can be quite hot, averaging around 30 degrees Celsius (86 degrees Fahrenheit) in the cities, making swimming and mountain escapes necessary, while winter brings snow and cooler temperatures (averaging around freezing), perfect for skiing and other winter sports. Visitors can also experience the famous hospitality of Central Asia, and immerse themselves in Kyrgyz culture. The world’s longest epic poem, the Epic of Manas, plays a prominent role in Kyrgyz culture, and is featured on many landmarks and monuments.

The Kyrgyz Republic stretches about 900 km from east to west and 410 km from north to south, and is situated between 39°N and 43°N degrees latitude. The total area is almost 200 thousand sq. kilometers.

Capital: Bishkek is the political, economic, and administrative center of Kyrgyzstan, as well as being a place of historical and cultural significance. The city is home to many government offices, diplomatic missions, and representatives of international organizations. Bishkek was founded in 1878, and has been the capital since 1926. Alongside government ministries and embassies are many parks and cafes, as well as museums and shopping centers. As of 2015, around a million people called Bishkek home. Read more...

Religion: Roughly 80% of the population is non-denominational Muslim, with another 15% following Russian Orthodoxy, and the rest following other religions. However, religious beliefs are not particularly prevalent in daily life, and instead are part of the culture and are tied to ethnicity and tradition. Religion, particularly Islam, is starting to play a larger role in public and political life, especially as interest grows in religion and spirituality after independence from the atheist Soviet Union. The government of Kyrgyzstan is secular, though it does monitor and impose some restrictions on religious organizations. Read more...

Form of Government: Kyrgyzstan is a unitary parliamentary republic.

Governmental Bodies: Kyrgyzstan’s parliament is called Jogorku Kenesh, and the chief of state is the president, while the prime minister is the head of the government.

Provinces and Districts: Kyrgyzstan consists of seven provinces and two independent cities with the same status as provinces. The provinces are Batken, Osh, Jalal-Abad, Naryn, Issyk Kul, Chuy, and Talas, and the two cities are Bishkek and Osh.

Kyrgyz Flag: The flag features a yellow tunduk with 40 rays of sun spiraling around it on a red background. The tunduk is traditionally the circular top portion of a yurt, and symbolizes the home and the universe. The rays of sun represent the 40 tribes of Kyrgyzstan.

Kyrgyz Emblem: The emblem features a hawk beating its wings in front of a panorama of the Tian Shan and a rising sun. The most prominent color is light blue, which traditionally signifies courage and generosity.