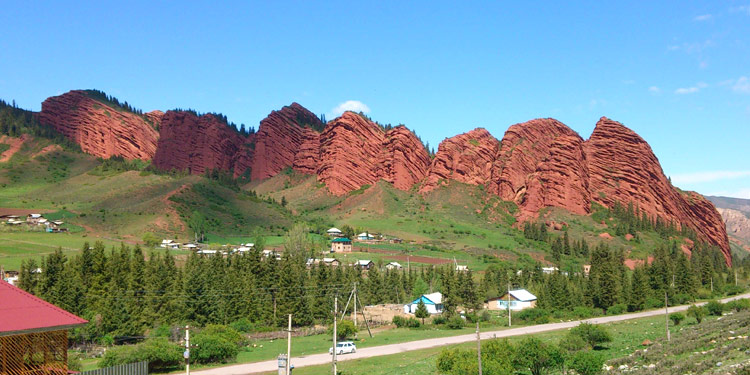 Jeti Oguz is home to a collection of seven red rocks that look a little like bulls lying on the earth. There is a Kyrgyz legend about how these rocks came to look the way they do.

A long time ago lived two khans, one of whom had a beautiful wife. The other khan fell in love with the wife, and stole her from her husband. This started a brutal war and fierce rivalry between the khans. The second khan asked for advice from a reluctant wise man; the wise man did not want to get involved with the rivalry, but relented and told the second khan to kill his wife, so that the first khan could never take her back.

The second khan organized a large festival, ordering seven bulls to be killed. When the final bull was killed, the second khan killed the wife. Blood ran from her heart, washing away the seven bulls and killing the khan and his servants. When the bulls came to rest, they turned to the red stone formation that can be seen today, called Jeti Oguz (seven bulls, in Kyrgyz).