Nikolay Mikhailovich Przhevalski was one of most celebrated geographers of Central and East Asia. He was a prolific mapper and cataloger, learning about and reporting back on the flora, fauna, mountain ranges, and people of Mongolia, Turkestan, China, and Tibet. Following his death in Karakol, in 1888, the town was renamed after him, and afterwards the museum was opened in honor of his life. 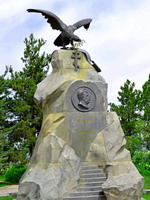 In 1888, Przhevalski contracted typhus from the Chu River on the eve of his fifth expedition, and died not far from Karakol. His body was buried on the shoreline of Lake Issyk-Kul. The Tsar changed the name of Karakol to Przhevalsk in his honor, and in 1991 it was changed back to Karakol.

The Przhevalski Memorial Museum was opened in 1957, and includes documents and exhibits from the USSR Geographical Society. Today, there are documents, photos, and personal items from Przhevalski’s life. Nearby is his tomb and a monument to his life. One issue is that the explanations for the exhibits are only in Russian, so some visitors may find it hard to understand the museum.