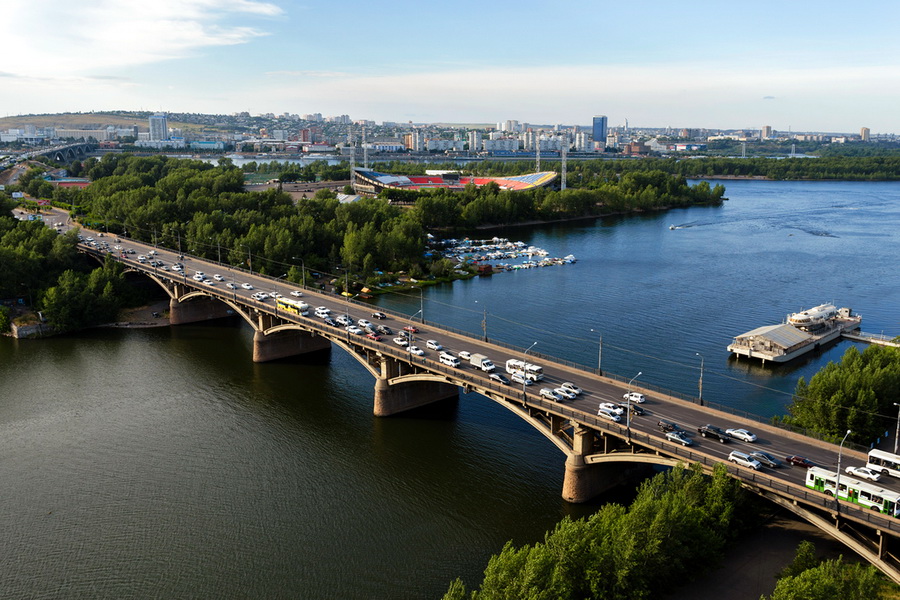 Tours, Attractions and Things To Do in Krasnoyarsk

A real Siberian megapolis, a city on the mighty Yenisei River and an outpost of the conquest of Siberia – all this is about Krasnoyarsk, a city with a difficult destiny, which managed to become one of the major economic centers as well as beauty and pride of the entire Siberian region. The XVIIth century was the time, when many Siberian towns emerged. And Krasnoyarsk is not an exception. It was founded in 1628, when Cossack detachment, led by Andrew Dubenskoy, built the fort with five towers on a promontory between the Kacha and Yenisei River outlet. Local residents named the fort ‘Krasny Yar’ because of the red color of surrounding slopes and ditches. Subsequently the city was called ‘Krasnoyarsk’.

The new fort played an important role in joining Siberia to Russia. Repelling the annual raids of nomads - the Mongol and Turkic tribes, it had been serving as a border fortress for nearly a hundred years. A stone chapel on the Karaulnaya mountain top still remains a mute witness of that time. Hence the defenders of the city could see from afar the approach of the enemy, and lit a fire thereby giving the fort a sign to prepare for a siege. Throughout the XVIIth century Krasnoyarsk fort was repeling numerous devastating raids of the Kyrgyzs and Dzungars. In 1690, when Siberia was finally joined to Russia, Krasnoyarsk fort was granted a city status. Having become an important glue in the main trade route of Siberia, in the XVIIIth century, Krasnoyarsk began to develop actively as a trade and craft center.Moreover, in 1822 it became the capital of the Yenisei province.

In the middle of the XIXth century Yenisei province has become one of Russia's largest gold-mining centers. Already in the late XIX - early XX centuries Krasnoyarsk acquired the traits of an industrial city. There were about thirty plants working in the city. In the postwar years, such industrial giants as the Krasnoyarsk Aluminum Plant, Krasnoyarsk Metallurgical Plant and Non-ferrous Metals Plant were built in the city. In 1961, a municipal bridge over the Yenisei River, which became the symbol of the city was established.

Today Krasnoyarsk is the largest industrial and cultural center of Eastern Siberia, the administrative center of a huge territory, stretching on the 4 000 km from the North to the South along the banks of the Yenisei. Krasnoyarsk is connected by air communication with many large cities in Russia and abroad.
The city is divided into two parts by the Yenisei. The left bank of the city part, located on the upper terraces of the Yenisei is particularly picturesque. This is the center of ancient Krasnoyarsk. Unique classic period buildings of the XVIII-XIXth centuries has been preserved here. Architecture of the XXth century is presented by the buildings of the Stalin era, the so-called ‘Stalin's Empire style’. Strelka is considered to be the historical city center. Krasniy Yar fort, which laid the foundation of the Krasnoyarsk city was founded, right here, in the summer of 1628.

Stunning in its beauty panorama of the city opens up from the top of the Karaulnaya Mountain - views of the majestic and mighty Yenisei, Kuysumsky ridge and rising Afontov Mountain.The Yenisei embankment is the favorite place for dates, walks and rest of the residents of Krasnoyarsk. You can see the beautiful panorama of the city from here as well.It may seem surprising, but Krasnoyarsk is a city of fountains. Currently, there are more than 300 fountains here. The most beautiful one is light and music fountain, located in front of the Opera and Ballet Theater.