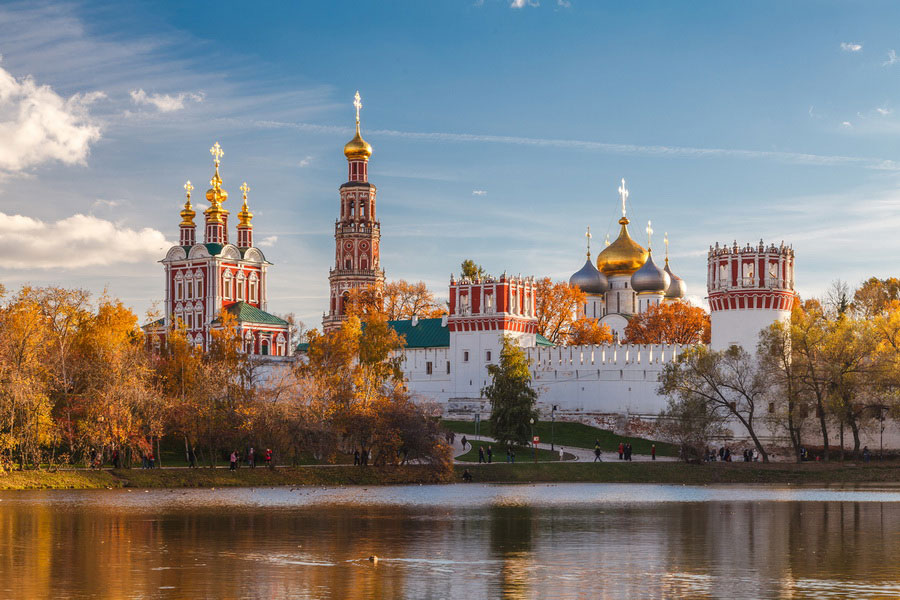 Novodevichy Convent is one of the most significant landmarks of Moscow after the Kremlin. Its special status and well-deserved worldwide reputation Novodevichy Convent owes to the interesting history of its creation as well as to the imprint it left in Russian history. The convent is situated in the southwest of Moscow, on a kind of peninsula, surrounded from three sides by the ribbon of the Moskva River. The complex of convent buildings includes 14 buildings including residential and auxiliary buildings, bell towers, and churches. Since its inception Novodevichy Convent has been one of the foremost places among other Moscow-based churches. It was founded in 1524 during the reign of Vasily III. The reason for its erection was the liberation of Smolensk from Lithuanian aggressors. In this regard, there was the second name of the convent, the Virgin-Smolensky. The name of Smolensky was also given to the main Cathedral of Novodevichy Convent. This monumental five-domed cathedral was erected in 1524-1525 years in honor of the Smolensk Icon of the Mother of God. The temple is notable for its paintings of the 16th and 17th centuries, five-tiered carved iconostasis and rare icons of the 17th century.

It is known that Novodevichy Convent, being the richest in Moscow, owned a vast land. The nuns of the monastery, as a rule, were from the upper strata of the nobility. In the 16th – 18th centuries the convent became an arena of political life in Russia – there, women from royal families took the veil. Behind the walls of this convent lived the daughter-in-law of Ivan the Terrible, Elena Sheremeteva (widow of Prince Ivan). In 1598, after the death of Tsar Fyodor Ivanovich, his widow Tsarina Irina Godunova took the veil there too. Boris Godunov, her brother, also became a monk. It was there that the boyars arrived to beg Boris Godunov to take the reins. There he was crowned. From 1610 the convent became home of Boris Godunov's daughter, Xenia. And in 1689 the monastery became the prison for the Princess Sophia, the sister of Peter I, who deprived her from power. Later, her sisters, Catherine, Mary and Fedosya and the first wife of Peter I, Evdokia Lopuchina, were imprisoned there.

It was the princess Sophia who at the time of his reign initiated the construction of the main buildings of the convent, the refectory with the Church of the Assumption (1685-1687), the gate churches of Protection of the Virgin and the Transfiguration of the Lord. Both temples built in Moscow baroque style, are distinguished by the wealth of white stone finish. Adjacent to the temples are Mariinsky and Lopukhinsky Houses (finished in 1688). In 1690 the amazingly beautiful layered tower of the convent was erected. It was called “the most prominent of all the bell towers of Moscow”. Abundant white stone lace covering the walls of the bell tower from the bottom up gives it a surprising lightness. Under Princess Sophia the walls and towers of the convent were paid special attention. In order not to look too harsh, they received the decoration in the form of openwork stone carving and multi-colored hue; the walls were capped with two-horned teeth in the form of dovetails.

Thus, by the end of the 17th century the formation of the existing architectural complex Novodevichy Convent was finished. Of its defensive past testify the powerful monolithic walls, 12 towers, and walls with loopholes ... During the war of 1812 Novodevichy was captured by the French and used as a warehouse of the army provisions. To reinforce the convent the inner wall was made and the church of John the Baptist was demolished. It is known, that before fleeing from the capital the French tried to blow up the convent, but the nuns managed to put out the fuses leading to the powder keg. This convent was saved. It ceased to exist in 1922. In the 1930s it housed the branch of the State Historical Museum.

The monastic life in the convent resumed in 1994, and since 1995 on church holidays Smolensk Cathedral has been the place of church services. In 2004 when Novodevichy Convent celebrated its 480th birthday, its architectural complex was included in the list of cultural and natural heritage of UNESCO.

Near the convent is Novodevichy Cemetery, the burial place for many of the great figures of science and art: Nikolai Gogol, Anton Chekhov, Mikhail Bulgakov, Mayakovsky, S. Marshak, F. Shaliapin, S. Prokofiev, Shostakovich, Vernadsky, Khrushchev, A.N. Tupolev and others.