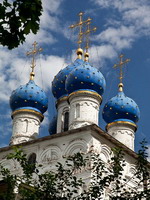 Kolomenskoye is an ancient village, on whose territory now stretches the architectural museum-reserve Kolomenskoye on the area of 390 hectares. This wonderful open-air museum is located in southern part of Moscow. For centuries the relics of Russian history have been created and carefully kept. For the first time the village was mentioned in 1339 in the chart of Prince Ivan Kalita as one of his ancestral villages. According to the story it was founded in the late 1230s by Kolomna citizens, who had fled from the invasion of Batu Khan (1237-1238).

In the 14th century the beauty of these places attracted the great princes of Moscow, who turned the village into their country residence. As time went by, the princely Rurik dynasty was replaced by the Romanovs. Kolomenskoye still remained the country residence of the ruling dynasty. There lived Vasily III, Ivan the Terrible, and Tsar Alexei Mikhailovich. Peter I pent his childhood there too. The architectural ensemble Kolomenskoe was formed in the 16th – 17th centuries. It consists of 17 monuments: 12 of them are the surviving structures the royal manor built in the 16th – 19th centuries, 4 monuments are wooden structures brought from different regions of Russia.

The jewel of this architectural complex is the Church of the Ascension erected in 1532 by Prince Vasily III by the river in the honor of the birth of his long-awaited heir, the future Ivan the Terrible. This building, as if to justify its name, strives upward. This is the earliest and most beautiful temple with hipped roof in Russia. The temple is accessed by wide porches from three sides. The slender temple with arrow-type windows and tall octagonal hipped roof was intended only for the members of the royal family. At present the temple is in common use of the museum and the patriarchal monastery. The Church of the Ascension has reached us without substantial changes. In the immediate vicinity of the Church of the Ascension there are three architectural monuments: St. George Bell Tower (16th century), Vodovzvodnaya Tower (17th century) and Hunting Pavilion (1825). The monument dedicated to the liberation from the Poles was the Church of the Kazan Icon of the Mother of God laid by the Tsar Mikhail Fyodorovich. The current temple was built in the early 1650 and acquired additional memorial significance - 100 years of the annexation of Kazan to Moscow State (it was in Kazan that in the end of the 16th century the miraculous image of Our Lady of Kazan was acquired) as the memorable inscription under the cross testifies to it.

The historic center of Kolomenskoye is the Tsar’s courtyard. It is surrounded by the fence with two gates: the Front Gate, or the Palace Gate - the formal entrance to the royal manor; and the Spassky Gate or the Back Gate. Ajacent to the Front Gate of Kolomenskoye are the Administrative offices. In 1667-1671 Tsar Alexei Mikhailovich built in Kolomna a huge wooden palace that was called “the eighth wonder of the world”. It consisted of beautiful tall log cabins connected by covered passages and vestibules and was adorned with rich carvings and interior painting. Unfortunately, in 1768 the dilapidated palace was disassembled. It has survived only in the memoirs of its contemporaries. However, the 600-800-year-old oaks are still there as well as the apple orchards. In 1930-1959 the architectural open-air museum was established in Kolomna.

The monuments of Russian wooden architecture of the 17th century were brought there: meadery from the village of Preobrazhenskoe, the gate tower of Nicholas-Karelian Monastery, 1693, from the White Sea coast, the tower of the Bratsk prison from Siberia, the house of Peter I from Arkhangelsk. The House of Peter I exhibits the royal interiors of living quarters dated the beginning of the 18th century. The exhibition of Kolomenskoye Museum is diverse and truly unique. The collection of white stone carving includes the decor of the destroyed temples and architectural monuments of Moscow. Besides, in Kolomenskoye you will find one of the finest collections of architectural and oven ceramics of the 10th – early 20th centuries.