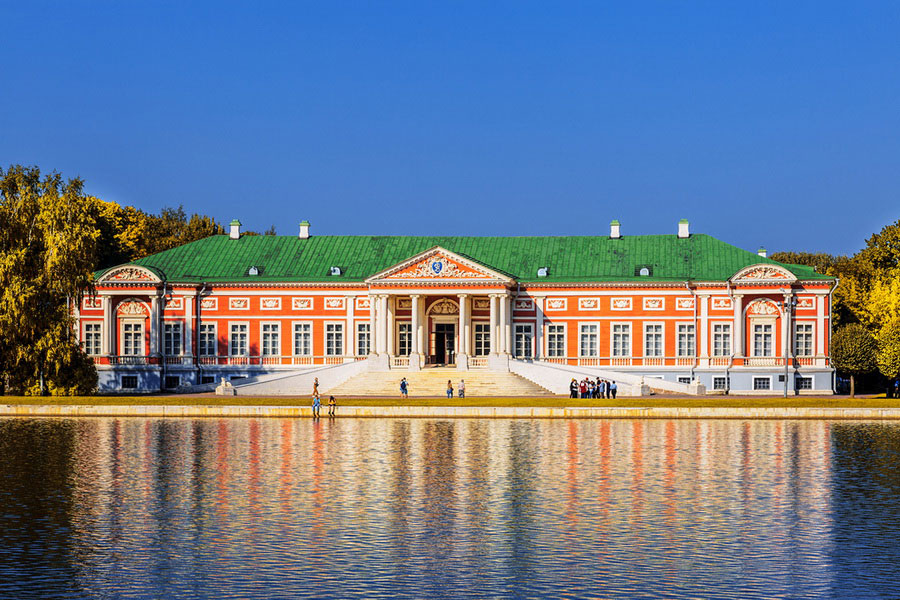 The jewel of the architectural art of the 18th century is Kuskovo Estate, formerly summer entertainment suburban residence of the Sheremetevs, which they had owned since the 16th century. Once Kuskovo was the most popular secular place in Moscow. The 230-hectare country estate could accommodate up to 30 thousand visitors. It is known that the idea of Duke Pyotr Sheremetyev was to make Kuskovo the most splendid of all other estates including the royal ones. As a result, the 300-hectare territory of the estate was decorated with a unique palace and park ensemble with the magnificent palace, three main parks – the French regular, the English landscape and Zaprudny as well as numerous ponds and other structures.

The construction Kuskovo Palace began in 1769 and continued until 1775. The pink wooden Palace with a stone basement was made in the style of early classicism with the elements of baroque. The building is also decorated with the monogram of Sheremetyev in the triangular pediment, Ionic columns, pilasters and carved compositions of military armor. The palace consisted of numerous rooms: the living rooms, rooms for card games and billiard, bedrooms and the library.

Today the estate is used as a museum. The layout of the palace as well as its interior has remained intact. The rooms and halls are still decorated with picturesque ceilings and unique parquet, furniture decorated with gilded carvings, silk upholstered walls, marble fireplaces and tiled stoves. All these are complemented with huge mirrors, the unique collection of paintings, portraits and decorative sculptures, clocks and porcelain items. In general, the architectural complex of the estate was formed in the middle of the 18th century. Surviving are not only the palace but also other structures – the Grotto, the Hermitage, the Big Stone Orangery, an old church, Italian and Dutch houses, the Merciful Savior Church and the bell tower.

The Grotto built in 1755-1761, is one of the most interesting buildings in Kuskovo. It is a stone pavilion in the baroque style. It is located on the three-tiered pedestal and decorated with various sculptures standing in the niches on the front and lion masks under the windows. The Grotto walls are decorated with stained glass and limestone tuffs. According to the architect the Grotto was to embody the elements of stone and water. The Hermitage built in 1765-1766, is one of the best monuments of Russian park architecture of the 18th century. The pavilion, built in Baroque style, was equipped with unique lifting mechanisms and was intended for reception of selected persons without servant’s assistance. Another building built in Baroque style, a large stone orangery, was built in 1761-1783. The greenhouse consists of the central pavilion with the hall for concerts and dances in center, linked with smaller galleries by glazed pavilions.

A special attraction of Kuskovo is a well-preserved French park with ponds, pavilions and the original marble sculptures. The Park used to be one of the largest in Russia in the 18th century. The strict geometry of its green architecture is enlivened by white marble sculptures by Russian and Italian masters. The French regular park is the only survivor in Moscow among similar garden art representatives of the middle of the 18th century.

The status of the State Museum was given to the estate in 1919, and in 1938 it was merged with the Museum of Ceramics, the only one in Russia. Today it is one of the world's largest owners of specialized collections of ceramics and glass of different countries from antiquity to modern times.
The architectural and park complex Kuskovo is the unique monument of Russian estate culture in terms of preservation and artistic value. This place still bears the charm of the bygone era, inviting visitors to plunge into the real world of aristocratic estate of the 18th century - romantic and mysterious.