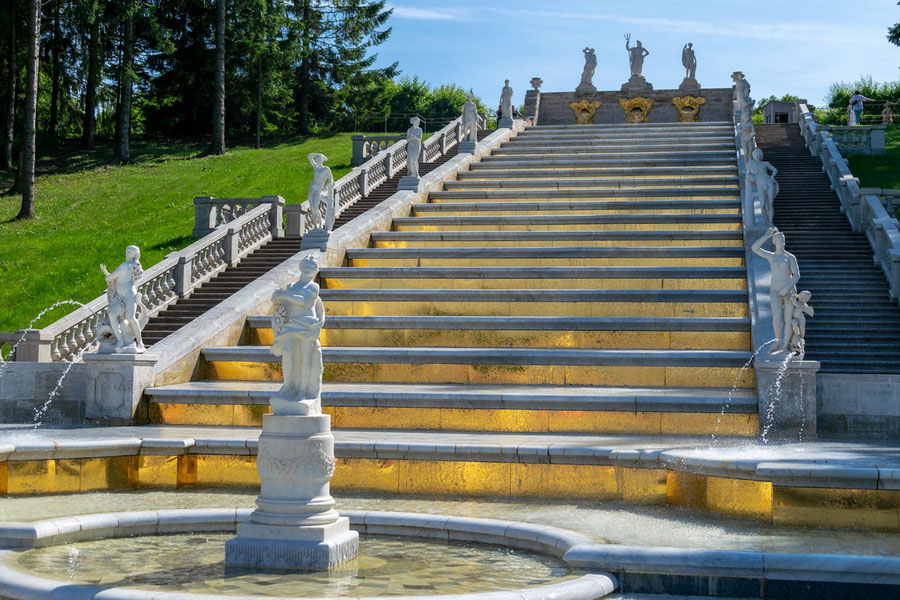 Every palace in Peterhof has a matching cascade: the Grand Palace - the Grand Cascade; Monplaisir – Dragons’ Cascade or the Chess Mountain; the Hermitage – the Lions Cascade; Marley - Golden Mountain Cascade.

The Grand Cascade, located in front of the Grand Palace, is the most tremendous fountain in the world. The ensemble of the Grand Cascade is composed of a big number of sculptures - bronze statues, busts, vases, bas-reliefs as well as the picturesque grottos, stairs, arches and bowls. All this grandeur is shiny with gold and washed by sprays of countless fountains. The Grand Cascade is the most ambitious fountain structure in the world: it brings together 64 fountains, 255 sculptures and decorative details. The heart of the Grand Cascade is a pool. The center of the pool is decorated with the most famous sculpture of Peterhof – Samson Tearing Lion’s Jaws. Symbolically, this composition means the victory of Russia over Sweden in the Northern War (Swedish coat of arms included a picture of lion and the victory in the Poltava Battle was won on the day of St Samson).

The powerful 3-meter figure of the biblical character personifies Russia- the Winner; 20-meter water spray gushes from the defeated lion’s jaws. Eight fountains spraying from gilt dolphins frolicking at Samson’s feet create a colorful water extravaganza. The lions-fountains peering from the rock niches personify the parts of the world. The central pool of the Grand Cascade is linked to the sea by the Sea Canal. It runs from the pool’s center directly into the gulf.

On both sides of the canal there are 22 round bowls whose sprays reach the height of 4 meters. The alley was named The Fountain Alley.

Adjacent to the Grand Cascade at its both sides are the terraces, marble cascades with five bowls on each side. These are the famous “Fountains on Terraces”. On both sides of each terrace are the sculptures of mythological heroes. The bas-reliefs on the fountain steps are also devoted to this theme. For example, Perseus holding the Gorgon Medusa's head.

Compositionally linked with the Hermitage is the Lion (Hermitage) Cascade. It was built in 1799-1801 and looks like an open Greek temple. The stone foundation is surrounded from three sides by 14 gray granite columns. Among the columns there are marble vases fountains. Standing in the middle of the indoor pool, on the hill of granite stones, is the bronze figure of the nymph Aganipph. From the two sides the cascade is guarded by bronze lions.

One of the most beautiful attractions of Peterhof -is the Dragons’ Cascade or the Chess Mountain. 21-m cascade is a sloping surface of the mountain, on top of which gapes a small grotto. The road in front of the grotto is made in the form of cascading broad steps. The artists painted the steps black and white, which gave birth to the name the Chess Mountain. On the upper ledge before the grotto arch clinging to the chess squares are three monumental bronze figures of colorfully painted winged dragons ready for battle. On both sides of the cascade are the marble statues by Italian masters. This is the unique collection of authentic decorative park sculpture of the 18th century. The cascade has been restored and open for the visitors of Peterhof.

Golden Mountain Cascade is amazing in the luxury of its decoration. Imagine a grand staircase with golden steps over which the rippling water is descending. Twenty-two steps are tiled with marble and their fronts are covered with gilded copper sheets. Six marble Greek Gods statues on pedestals are standing on both sides.

On the upper wall in the center is the statue of Neptune with a trident in hands; on the left is Triton trumpeting into the conch; on the right - Bacchus, the god of wine and merriment.

In the pool in front of the waterfall stands the statue of Flora, the goddess of spring and renewal of nature.