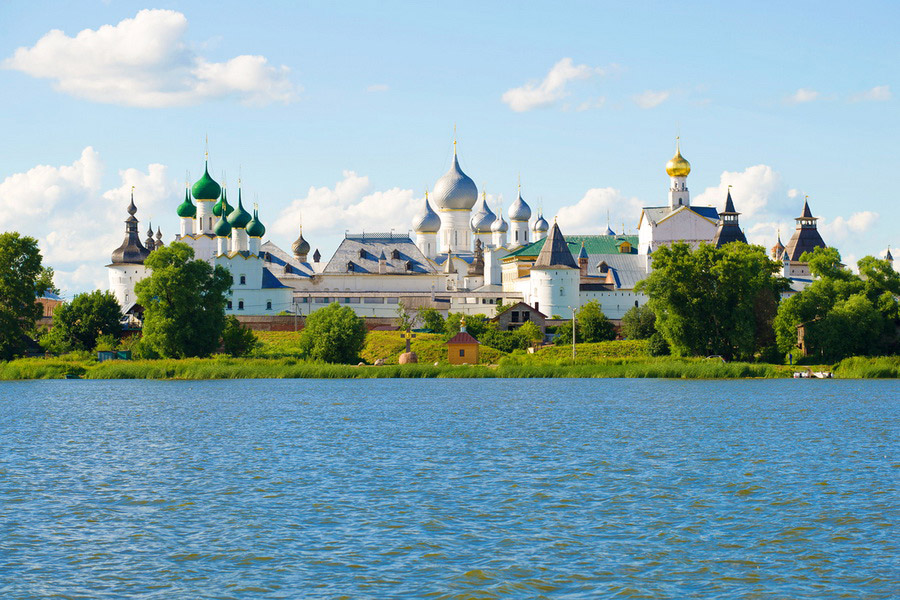 This graceful white stone complex with elegant churches, tall belfries and round towers will take you to a Russian folk tale. It seems as though we are about to hear the ringing of church bells, and dressed up boyars will emerge from the gate... In fact, the Kremlin is now visited by tourists. It stands right in the center of the city surrounded by ancient monasteries.

The Kremlin territory is huge and contains a lot of buildings both temple and economic. The entire splendor was created on the initiative of Rostov Metropolitan, Iona in the 1660s. Rostov has always been the center of Russian Orthodoxy; in 1589 Rostov archbishopric evolved into metropolitanate. The Metropolitan Iona planned to build there the “Russian Vatican” putting all his energy and talent in the construction of the Rostov Kremlin. The process went on for nearly thirty years. One by one appeared the gateway Church of St. John the Divine (1683), The Red House (1680s), the Church of Gregory the Theologian (1680s), the Church of Hodigitria (1693), the gateway Church of the Resurrection (1670), the Metropolitan mansion (1660s), the Church of Our Savior (1675), the court office (1660s), the house on the cellars (17th century), the White House, the Holy Gate, the Assumption Cathedral (1512), the belfry (1682), the shopping arcade (1830), the church of the Savior in the Market Place (1654 -1690). All the buildings were connected by covered passages and galleries. You could use them to get to six churches and the Cathedral, as well as towers and chambers each of which represents an original architectural structure. In 1670-1675 the Kremlin was surrounded with a white stone walls with 11 towers built in the style of the Kremlin wall in Moscow with decorative turrets and battlements.

Despite its wondrous beauty the Kremlin was often in danger: it suffered from fires; after the metropilitanate was transferred to Yaroslavl it was completely abandoned and began to deteriorate. The precious frescoes were ruined. It the end of the 19th century Rostov merchants donated funds for the rescue and restoration of the buildings of the beautiful architectural ensemble of the Kremlin.

Now the churches of the Kremlin house the museums that show church utensils, enamels, porcelain and ceramics. Currently, the complex is divided into three relatively independent functional zones: the bishop's yard, the Cathedral Square and the Metropolitan Gardens. Today, the Kremlin can be visited as a state museum.