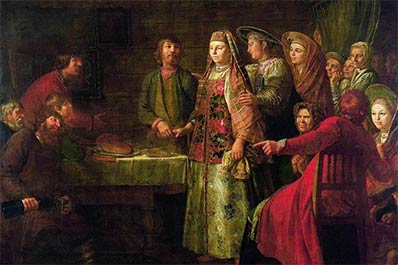 Before setting off to church the special ritual took place - a symbolic linking of the groom and the bride accompanied by special songs in the middle of the house or in the yard. Druzhka or matchmaker let the bride and groom come to each other and joined their hands or tied them with a towel (kerchief). The groom and the bride had to walk in a circle three times. Of magic significance were rituals with bread. For example, druzhka cut a piece of each of the bread loaves belonging to the bride and the groom, put them together tying with a red ribbon and gave them to the godmother who put them on the table. Sometimes the loaves were broken above the heads of the groom and the bride sitting together. A half of the groom’s loaf was passed the bride's father, and a half of the bride’s went to druzhka; then both halves were tied with a ribbon and placed onto the table.