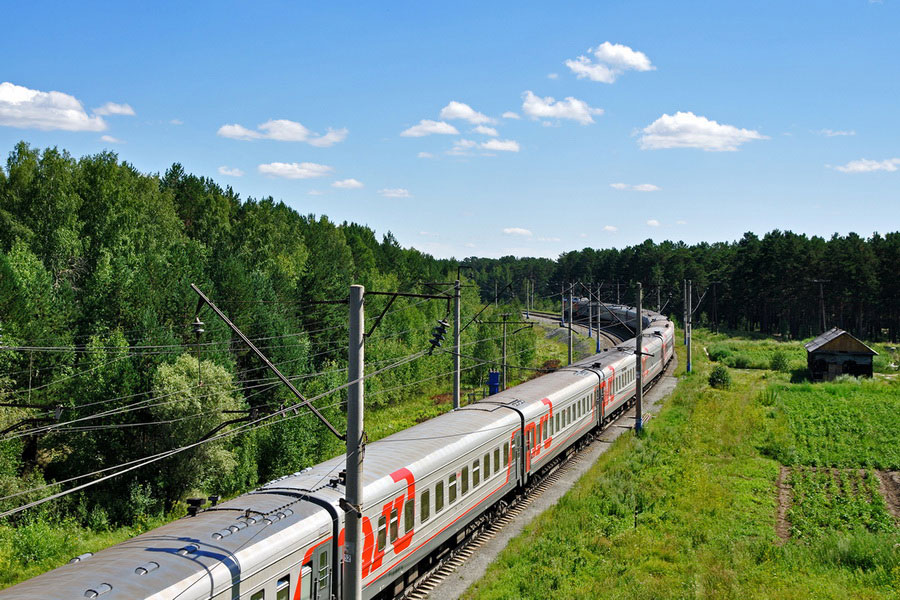 Transsib - Connecting the West and the East

Perhaps none of the railway project can be compared with the Trans-Siberian Railway (Transsib) by its length and unusual history of its construction. With a 9,228.2-km route, crossing 87 cities, 5 federal counties, passing 8 time zones, connecting Russian western and southern gates to Europe and Pacific ports, this trunk may be rightfully associated with some portal through space and time. The European part of the trunk accounts for about 19 percents and that of the Asian - 81percents of the whole Transsib length. The railway construction took a quarter of the century (from 1891to1916), that was quite a good rate for that time. Taking into consideration the length, rates of construction, volumes of the work performed, design difficulties and implementation of some architectural know-how, the Trans-Siberians Railway ranks second to none up today. All its records need a separate chapter in the Guinness Book of Records.

This project implementation was brewing up long enough, indeed, it necessitated for huge fund investments and involvement of unprecedented number of man power. The natural environment prevailing in some region of Russia impugned the implementation of this ambitious project at all. This project realization became possible only due to a personal support on the part of the Emperor. For this purpose an ad hoc committee, conferred with wide authorities and headed by the future tsar Nikolai II, was set up. Nobody knew that this railroad in future would outrun decades becoming one of the symbols of rise of the whole Siberian and Far Eastern regions. Up to date, the Transsib is a modern completely all-electric double-track railroad with a highly developed infrastructure. The “fastest” trunk train No. 1/2 “Russia” en route Moscow-Vladivostok covers the whole distance for 6 days and 2 hours. All together the Transsib runs through the territory of 87 cities of the Russian Federation, including Moscow, Kazan, Yekaterinburg, Novosibirsk, Krasnoyarsk, and Vladivostok.

Every city along the Trans Siberian Railway has its own history, its own inimitable atmosphere. The Transsib is unique because it represents a cultural and historical panorama review, reflecting the whole rich history of Russia with its sometimes mysterious, sometimes contradictory pages. The cities like the pages of a traveler’s book, narrating about the life and manners of people with different culture who live in the huge country with its centuries-long history. It is a part of architectural and historical mosaic inlaid on the map of vast Russia.

Moscow is surely the a place of most valuable monuments of architecture: the Kremlin, Cathedral of Christ the Saviour, Saint Basil the Blessed Church, Lenin’s Mausoleum and so on. Besides the fact that Moscow is a political, cultural and scientific center, this city presents its guests with another alternative such as a dynamic and bright night life and temptations, the Russian capital is famous for. Moscow has a great number of hotels, museums, theaters, and clubs. More about Moscow...

The amazing architectural appearance of the capital of the Republic of Tatarstan managed to combine a merger of two cultures: Orthodoxy and Islam. The Kazan Kremlin is included into the UNESCO World Heritage, and the Kul-Sharif Mosque located inside the Kremlin itself is the main Juma Mosque of the Republic of Tatarstan. One of the main landmarks of Kazan is the “falling” Syuyumbike Tower. Built as early as in the XVII-XVIII centuries, the tower has almost a 2-m deviation in its apex. Kazan is the city with an amazing millenary history with many architectural monuments extant up to date. A developed infrastructure and wonderful cultural heritage make it attractive for travelers. More about Kazan...

Yekaterinburg, or as it is also called “the capital of the Ural” is the most beautiful city with the rich past. The city’s architecture is quite variable and represented with the architecture of Russian classicism and Soviet avant-garde. Its main landmark is the “Ganima Yama” Monastery, built at the burial place of the last Russian tsar’s family. One of largest orthodox temples of Russia - “Temple-on-Blood” was built next to the execution place of Nikolai II and his family. The city is rich in pre-revolutionary farmsteads and monasteries. More about Yekaterinburg...

The eastern part of Siberia is occupied by a grandiose by sizes, the ancient by origin and one of the amazing places on the planet – the Baikal Lake. It is the deepest lake in the world and the largest storage of fresh water. There are numerous cultural, natural, historical and archeological monuments around the Baikal. One of them is the Circum-Baikal Railway – a unique architectural and historical monument or as is it is also usually called the “Golden Buckle of Russia” for its project expensiveness. A visiting card of the Baikal is Listvyanka village. It is a popular resting place and starting point of many tourist routes. The Baikal largest island is Olkhon, an ancient place and modern representative of shaman culture which still exists in these places. Ogoy Island is a legendary place of the Buddha followers and one of the most popular tourist objects, since 2005, when an 8-m high concrete plate with over 2,000,000 Buddhist mantras, hidden inside, was established. More about Baikal...