Georgia and North Caucasus on the Silk Road

In the 6th century the North Caucasus became the arena of collision of interests between powerful empires of Byzantium and Persia. The reason was very significant — they fought for the control over vital trade routes of the Silk Road passing across the Caucasus.

In the 6th century Byzantium started the fight for Lazica and Svanetia (mountainous areas of the West Georgia and the territory of modern Abkhazia); East Georgia (Iberia) was at this time under the control of Persians.

Byzantine emperor Justinian tried his best to change the habitual caravan routes going from China, and to direct them to the Black Sea coast across the mountain passes of the North Caucasus bypassing Persia.

To ensure protection from the wild mountain tribes he built a mighty fortification stretching from Sukhumi to Poti. The huge structure of 160 km in length was second only to the Great Wall of China. 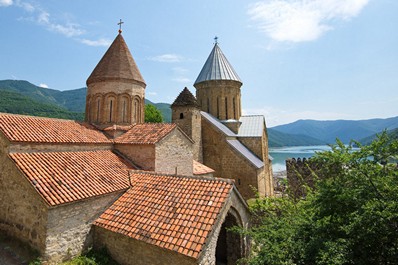 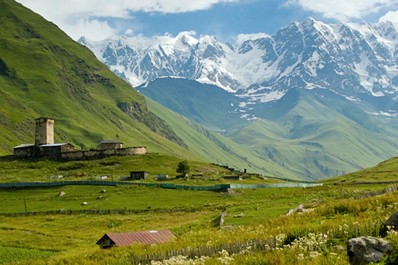 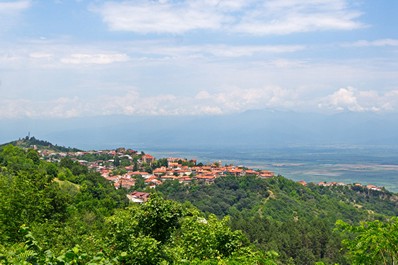 A little later, Christian monks-missionaries headed for the remote mountain areas of the North Caucasus. They started to erect monasteries to attract people who in turn built settlements around the monasteries. Caravaneers were in great need of such strong points reliably protected by fortifications. There they could change horses and guards, hire guides, repair equipment, spend a night, hide from bad weather and to receive information on what they might expect during their further travels.

As time went by the mountain routes altered depending on historical situation, with the only exception - their route had always lie along the rivers since only in the river valleys they could find paths suitable for travel.

Caravaneers could get to Georgia only following the rivers of Ossetia across the Mamisoni pass. One of the valleys, the Fiagdon, still has a number of small temples, and near the settlement of Dzivgis there is a very interesting complex. In one of rocks you will notice a huge cave which could host a caravan. From outside the rock is covered by a high vertical wall with loopholes; in front of it stands St. George's temple with loopholes looking to the valley. 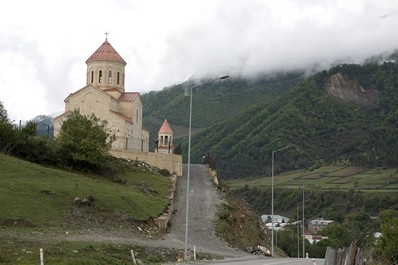 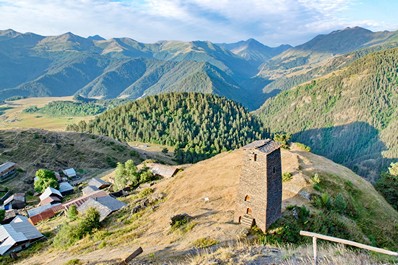 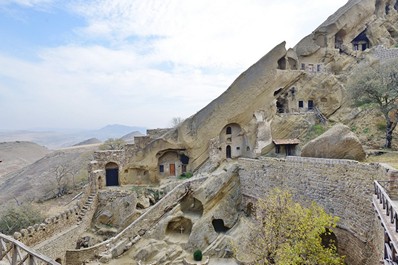 The Georgian sector of the Silk Road passed across the territory of Svanetia. It went along the Kuban, the Teberda, the Inguri and the Rioni ending in Phasis (now Poti) — the ancient trade center, the former capital of legendary Colchis. In the valley of one of the Teberda inflows called the Uchkulan, the retaining wall of the Silk Road leading to the Nakhar pass has survived. Caravaneers went along the Greater Caucasus and after descending got in Mestia. Their further route went up again to the settlement of Ushguli and other villages which also had complexes of temples with towers. Then the road went through Low Svanetia to Kotatisium (now Kutaisi), and then along the Rioni river valley to Poti.

The Silk Road going across the North Caucasus was used by merchants until 1453 because after the falling of Constantinople under the attacks of Ottoman Turks the silk trade froze. People started leaving those places, the temples were abandoned gradually. But the history has managed to save these surprising structures erected by ancient Georgian and Greek builders along the caravan routes of the Silk Road which crossed the North Caucasus.