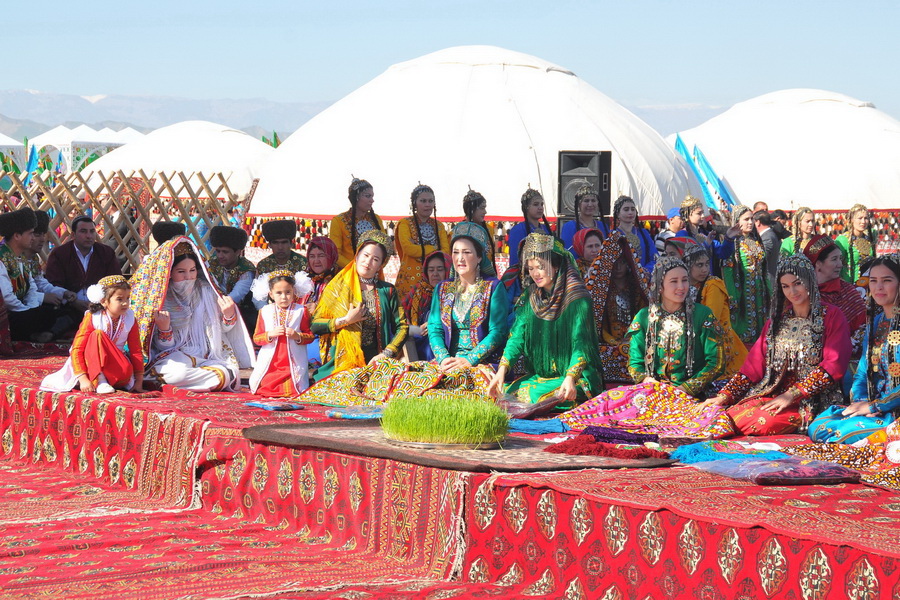 Hospitality is a distinguishing feature of these friendly people and old well respected Turkmen traditions. Turkmen often judge a person by the way he treats his guests. A guest is greeted by phrase "Khosh geldiniz!" and besides that such ritual phrases as: How happy we are to see you! What an honor you have rendered to us!" are a must.

The cloth with food on it is considered sacred and it is a sin to step on them. Before eating everyone according to tradition should praise the Lord. They say in the Orient: "Every guest is sent by the Allah!”. It means that hospitality is not only the host's duty but also his sanctity. This tradition was born in the ancient times and has rooted in modern Turkmen lifestyle. In those days it was a simple form of security. People could not survive the hardships experienced in the desert without each other's support. Therefore, if somebody had been inhospitable to a traveler, even the relatives of such a person would have despised him. Turkmen have always considered bread and salt sacred. Stepping on them was a sign of misfortune.

The respectful attitude toward seniors is also based on ancient traditions. It is considered as unacceptable not to help them, to argue with them, to look at them frowningly or to show discontent, to wait for their gratitude for the rendered service or to remind of it. The customs demand honoring parents and seniors. Turkmen saying runs: "Gold and silver do not grow old, the father and mother are priceless". The father as the family head has the right to evaluate his children's behavior and is obliged to protect them. Children should worship their mothers and respect them. The slightest display of disrespect or inattention to mother is not only denounced by people but also should be stopped on the spot. 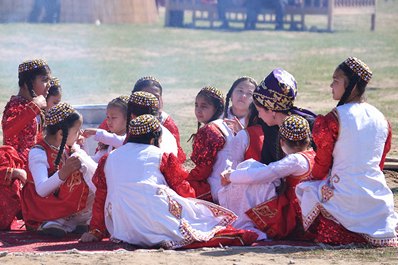 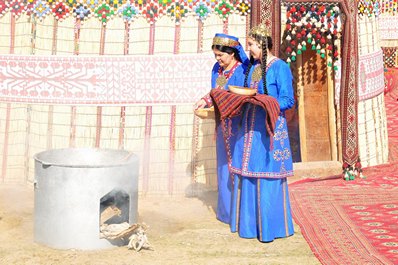 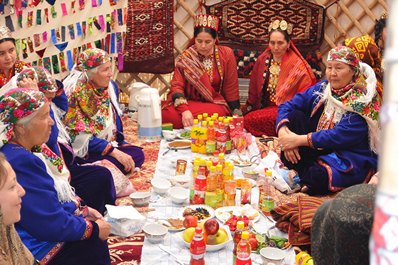 Turkmen are highly moral people. In the attitude toward life they cultivate hospitality, honoring of seniors, modesty, nobleness, truthfulness, honesty, boldness, sincere generosity. They say "Only a noble person can keep his word".

Turkmen highly value the idea of honor. "My honor is the honor of my family, my nation, my people", - they like to repeat now and then. Turkmen possess a strongly developed spirit of kinship.

Turkmen have always appreciated sincerity. "Tell the truth even if it is against thee". Duty and obligation are honored, light-mindedness and garrulity are denounced.

Turkmen society has always negatively treated malignant gossip, saying that “the one who gossips with thee, can gossip about thee too". And such unworthy features as cowardice and ingratitude were also despised.

Turkmen value friendship and love, maintain friendly relations with neighbors. There is a number of national by-words about this: " Before building a home find out who thy neighbor is", "If your neighbor is happy you will be happy too", "First of all take care of your neighbor", "A neighbor next door is better than a brother far way". 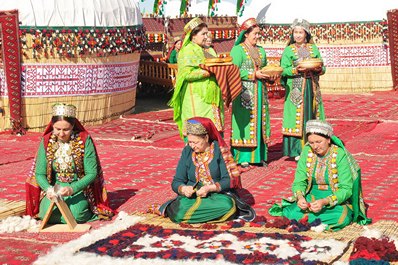 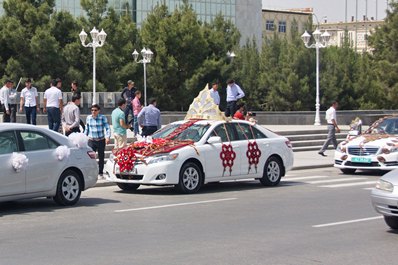 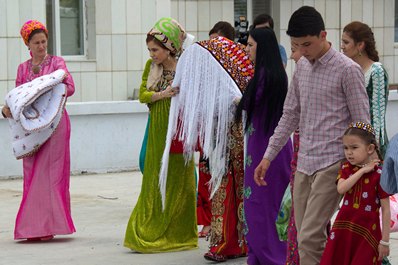 Weddings are hub for Turkmen traditions and customs where one can learn a lot from numerous customs and ceremonials. One of the leading roles in them was played by clothes. It was thought that they even possess magic properties of protection and purification.

A scarf meant a lot in wedding rituals. On "gelin toi" day (wedding of the bride) women from entire brought their wedding gifts and sweets wrapped in kerchiefs. When they were about to leave they got their kerchiefs back full of presents equal to those they had brought. A big kerchief itself was considered a kind of a gift. A kerchief was the most valuable prize to win during men's contests. Read more...

Only certain "lucky" days which were suitable for cutting and sewing of a wedding dress. The well-being of the bride depended on this to the great extent. A dress was sawn in the house of the bride from the fabric presented by the groom. The most respected woman of the village, a mother of many children, along with the bride's dear friends, was to cut the dress. They were allowed to take away scraps of fabric - for good luck. Read more...

Nearly all wedding clothes of Turkmen women besides their direct purpose also fulfilled the role of charms. The bride's outfit consisted of various amulets designed to protect her from evil forces, helped her to stay healthy and wealthy. For example, even the wedding dress itself, which was made of traditional red fabric could arouse envy, attract an "evil eye"; therefore, it was supposed to protect the bride by all possible means. To escape alien eyes the bride wore a cape covering her head along with amulets and charms which were believed to possess guarding forces. Read more...