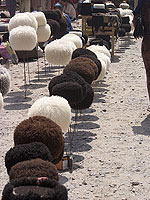 Despite forty-degree heat Turkmen aksakals (elders) wear big shaggy fur hats which fascinate foreign tourists. However, this unique headdress which was created by Turkmen many centuries ago indeed saves them from intensive heat.

From time immemorial Turkmen clothes have been adapted for wearing them extensively in the open air and in the sun. The practicality of this headdress was determining factor because being nomadic Turkmen had to cover great distances in deserts. So a fur papakha - "tel'pek" was born. In spite of looking heavy this is actually a relatively light hat. It creates a special microclimate under it which saves from overheating in summer and cold in winter.

"Tel'pek" plays a major role in Turkmen national menswear. It serves as an original criterion of man's figure beauty, personifies pride and nobleness, helps to develop a handsome bearing and graceful movements. "A hat is worn not for warmth but for honor. If you have no one to talk to - talk to your papakha", - they say in Turkmenistan .

Turkmen are very much proud of their headdresses and take great care of them. They have always covered them with a kerchief and to make sure that the fur was straight and the cap was not deformed they put them on special dummies made of mulberry tree.

Hats used to be of different kinds: holiday, smart and casual, for young Dzhigits, elderly men and old men. They were made from grey or golden astrakhan fur, magnificent furs of martens, foxes, muskrats. Long-haired hats were also made of skins of special breed of rams with silky and curly wool as well as Angora goat's skins. They were very expensive. For holiday hats they preferred fine curly fur of lambs. Black thin astrakhan skins are distinguished by the highest quality. Astrakhan fur was a symbol of high secular or holy order. Only a limited number of people could afford such exquisite headdresses in the past. For example, a fashionable high hat from astrakhan skins with long curly wool was equal to the price of a camel or of a cow with a calf.

Papakhas were usually worn on top of a small Turkmen skull cap - takhya.

The shape of papakhas on the territory of Turkmenistan was also rather various: from tiny to grandiose. In the remote past the rich and noble Turkmen wore papakhas of nearly half a meter high. All hats had a quilted lining and could sustain strong sword impacts. Light, elegant papakha was in the best way adapted for military campaigns and horse riding.

It was a tradition that papakhas were made only by men. The craft was passed by right of succession. Masters were especially praised and were very respectable people in villages.

Manufacture of "tel'peks" is still alive in streaks Turkmenistan. Now craftsmen produce a wider assortment of hats of various quality to satisfy every possible demand. Among smart pappakhas which are worn for especially solemn occasions the highly ones - up to 25- 30 cm - very shaggy with long silky hair, are especially valued. The majority of middle-aged and older men prefer papakhas from black and brown furs with silver streaks. Young ones prefer white tel'peks.