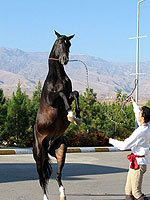 A horse for Turkmen has always been a sacred animal. It is difficult to imagine a Turkman without a horse. «The horse is an equitable member of a Turkmen family", - they say. Turkmen have preserved careful and anxious attitude toward horses for millenia. In the 5th century BC "The father of history" Herodotes wrote that the ancestors of the Turkmen had selected a horse as a symbol of the sun because they believed that the fastest star in the sky should match the fastest animal on the earth.

The image of a “winged horse" is mentioned in Turkmen national eposes - "destans".

Turkmen's pride and the main attraction of their country are Akhaltekin horses - the best horses in the world. Turkmen believe that they originated from heavenly horses. There are a lot of legends about Akhaltekins being descendants of a wild "sea" horse.

Here is one of such legends … "In Turkmenistan mountains there used to be a spring from which an unusual horse came out each time the herd of horses was at a drinking place. Time passed and mares of the herd gave birth to colts - big, superb and beautiful. When Turkmen saddled and broke in one of them they discovered that "it was in fact flying between heaven and earth, obedient to the bridle and swift".

The legends of "heavenly" and "sea" horses which ostensibly were the ancestors of Akhaltekins are echoes of rich mythology of Turkmen people - descendants of first-ever horse-breeders.

Famous, "fast like wind" Akhaltekins have glorified the country in the whole world. Even the state emblem is decorated with an Akhaltekin racer. It is a really unique breed - fast, graceful, with chiseled "swan-like" neck and slim legs, these horses are surprisingly strong. Every year in Turkmenistan on last Sunday of April "the Festival of Turkmen Racer" is held. There everyone can get acquainted with this unique breed and visit numerous horse competitions both classical and national sports with participation of horses. 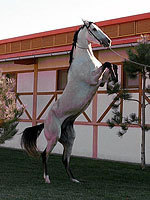 There are a lot of legends told about Akhaltekins fidelity. A horse has always been of spiritual value to Turkmen people. Argamaks were considered as an attribute of well-being and prosperity but nevertheless were never regarded as a material asset since nobility, fidelity and friendship are priceless. These are the qualities the famous Akhaltekin horses possess. Turkmen peoples praised Akhaltekins in their legends and songs, they even built their monuments. Turkmen have given the world a precious gift. They have not only reared the unsurpassed breed of horses. Having tamed a horse long time ago they put their hearts in them and made of argamak a reliable helper and faithful friend who "would catch the wind in steppe and neither betray nor deceive".