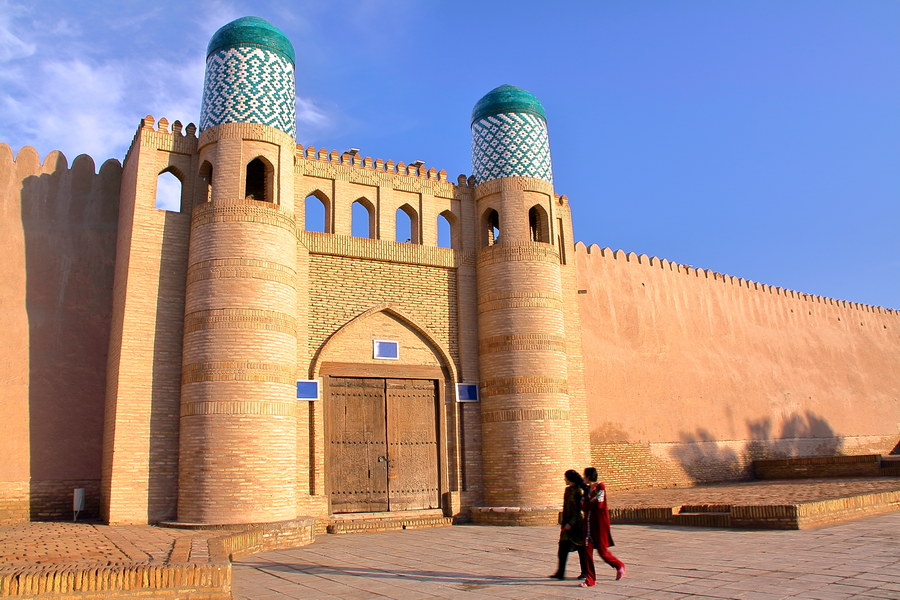 According to historical evidence, in 1686, Arang-khan began the construction of the citadel Kunya-ark at the western gates of Ichan-kala. The ark presented a complex multi-yard composition, containing a house for khan, the members of his family, and dignitaries. From the large numbers of constructions of the ark only several buildings of the nineteenth century and the beginning of the twentieth century were preserved. They were the official reception hall (kurinishkhana), a mosque, the mint, and a harem. Previously, there were an arsenal, a powder-mill, and an official building, warehouses, a kitchen, guardhouses, a stable, and a parade area. Fortified gates led to the citadel. A high-cogged wall separated the ark from the neighborhood dwellings of Ichan-kala.

There was an outer yard, serving as a waiting room for the khan's audiences. There were cannons in a second yard. The officials of khan gathered in the third yard, and only then the main door of the kurinishkhana was visible. A felt yurta (nomad tent) was put up for the khan's use. A narrow corridor led to the harem and a staircase led to the Akshikh-bobo mount from here. The two-layered aivan, which was practically merged into the city wall, opened in the direction of the city. This was a good place for an observation post. From here one could see the panorama of the whole city and the neighborhoods. They say that Khiva's rulers liked to rest here on warm nights.

The Akshikh-bobo aivan has also been used for military observation. 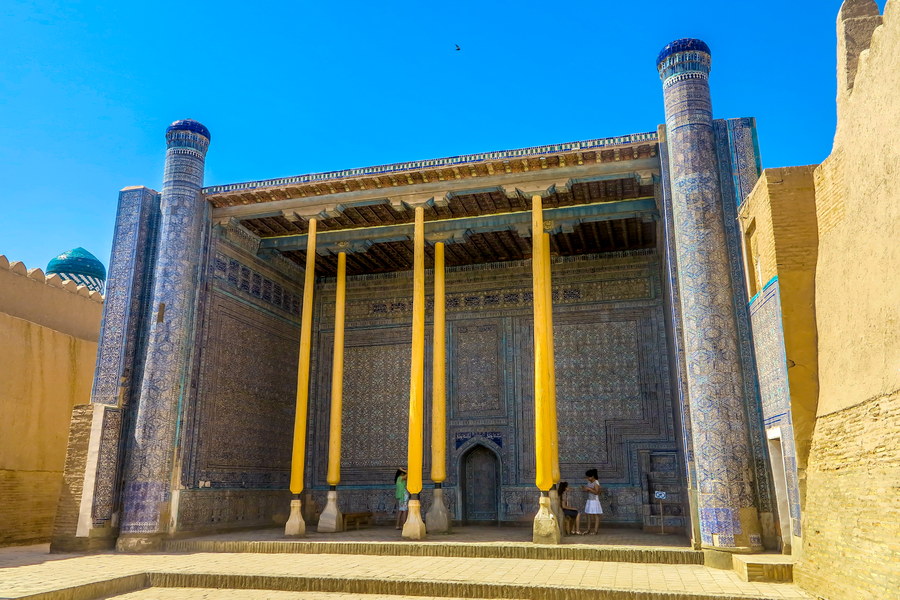 The fortress constructions were closely compacted together; their charm can be seen in the yards with their splendid aivans. The high two-column aivan of the kurinishkhana, where receptions were held, completely is faced with majolica. In the eighteenth century during the devastating invasion of the Iranian troops many constructions of the citadel were destroyed, and the kurinishkhana was damaged. At the beginning of the nineteenth century Iltuzar-khan renewed it. There was a throne-hall, khan's apartments, treasury, and manuscript depository. The cold blue-white and sky-blue patterns of the majolica plate contrast with the red murals of the ceiling. The Khiva masters arranged ornaments freely and picturesquely. The interior of the throne-hall is decorated with carved plaster. The throne was made of turned wood, decorated with stamped silver. The local master Mukhammad made it in 1816.

The building of the mint and an asymmetric mosque with an aivan were built at the same time and comprise a single complex. The famous Khiva masters Abdulla Jin and Ibadulla did the majolica facing of the mosque. The ceiling of the aivan is painted with elegant golden patterns on the blue background.

There is a harem, built under Mukhammad Rahim-khan II in the second half of the nineteenth century in the northern part of the citadel. The pillars of the aivans are covered with traditional carved ornaments. Instead of complete majolica facing one can see separate colored ceramic insertions. The walls are decorated with simple plastering and colored brightly.

The Khiva aivans were unique with their elegant decoration. Through skilful carving, stone carving, and decorative ceramics the artists and architects of Khiva expressed their notion of beauty.

Among the preserved architectural monuments is a bathhouse, built in 1657 and devoted to Anush-khan. This is a semi-underground, multi-chambered construction. The system of cupolas covering the building is seen from outside. From the lobby via a cloakroom one can get into the main bathing hall, connected with the arched passages, and into the rest houses, which are around the hot-water pool. There is a reservoir with cold water in the central hall. A system of under floor canals through which hot air passes warms the bathhouse. The efficient technology of the bathhouse, combined with imaginative planning and with simple constructions epitomizes the architecture of the municipal constructions of Khiva.

In the eighteenth century the summer palace of the Khiva khans, Chadra-hovli was built in the suburbs of Khiva. The building consists of four stones. The first of them represents an exclusive two-chamber winter building where there was a stable and a warehouse. The adobe staircase leads up to a second floor, consisting of a dwelling and aivans facing the west and south. The aivans create a view of the environs from the three sides. As one ascends, the weight of the floor and the thickness of the wall are reduced dynamically. Three windows are placed vertically on the northern facade.

The building was erected with adobe blocks, fluting is seen on the facade and the interior is trimmed by plaster. The only element of the decor on the aivans is the carved wooden of the pillars. The Chadra-Khovli is characterized by originality and simplicity.