If blue domes as the symbol of the eastern architecture  can be often found in Samarkand and Bukhara, there is only one blue dome in Khiva.  It decorates the tomb of Makhmud Pahlavan, a famous poet and warrior of the XIV century. There are a lot of legends about his strength and courage. One of the legends tells  that Pahlavan conquered the Indian ruler, and the latter agreed to reward him with whatever the hero would wish. Then Pahlavan Makhmud said: "Release my countrymen from prison."  And when the ruler asked  how many people  he should release, Pakhlavan told all those who would fit into a cow skin. He cut the skin into thin strips, tied them into one large belt and wrapped all the prisoners with the belt. So Makhmud rescued many people from slavery. After his death Muslim clergy canonized him. 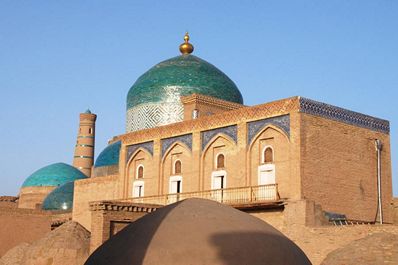 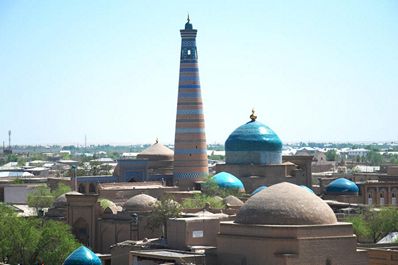 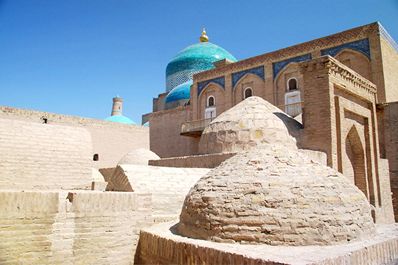 The complex was built only in 1701, according to the inscription on the stone gates. The dome of the mausoleum is covered with blue glazed tiles with glittering gilt top. Originally, the mausoleum was small and modest, but it quickly became a pilgrimage site with a lot of hujras, khanakas and mosques. The walls of the mausoleum are decorated with magnificent majolica. In the mausoleum of Pahlavan Mahmud people pray and drink the holy water.